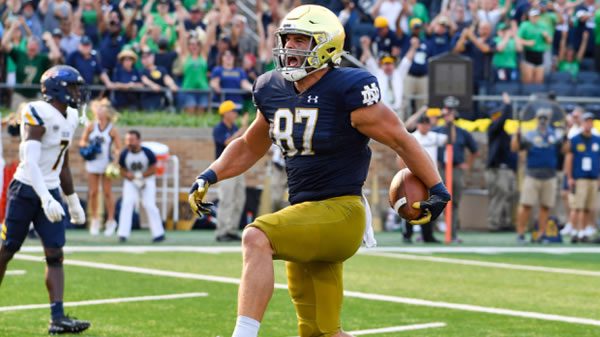 Point Spread: ND -5/UVA +5 (Intertops - The oldest and most trusted sportsbook on the web!)

The Notre Dame Fighting Irish come into Charlottesville to battle the Virginia Cavaliers on Saturday. It’s a big game for both. For the 8-1 Irish, this represents a chance to notch another win over a respectable opponent, as they try to put together a resume to get into some premier postseason consideration. For the 6-3 Cavaliers, getting into the conference championship is still on the table, and this would be a big notch on their belt.

Since losing their only game of the season to the still-unbeaten Cincinnati, Notre Dame has won four straight, including their 34-6 win over Navy last week. Their offense is again in high gear, as their defense has been putting forth some good showings as of late. They’ve had a few close calls this season, but they’re a team with a lot of balance, and in 7 of 9 games, they’ve scored between 31 and 44 points, showing a lot of consistency on the offensive side of the ball.

Virginia, meanwhile, was on a nice roll, scoring a lot of points and on a nice run of conference wins. Two weeks ago, it all came apart at the hands of BYU in a wild 66-49 loss to BYU. Leading 42-38 at the half in an offensive bonanza, the roof came off on the Virginia defense late. They allowed over 700 yards of offense in a really awful showing. Granted, they still have a lot to play for in conference, and having an extra week to work things out helps, but let’s just say there are ample question marks surrounding the Virginia defense.

Giving up to 66 points to BYU is one thing, as current Cavaliers coach Bronco Mendenhall was humiliated by his old team. But it’s not just that, with Virginia allowing 59 to North Carolina, 37 to Wake, 33 to Louisville, and 40 to Georgia Tech. Against a consistently-effective Notre Dame offense, this looms as a major obstacle to a cover. It’s all too conceivable that the Irish just drop the hammer on this unit. They can’t stop the run in almost any game. The Cavaliers don’t make any game-turning plays on “D,” and with teams running against them so much, you’d almost figure their passing defense numbers would benefit and almost give the illusion that they’re adequate. But they’ve been bad too.

Look for Notre Dame QB Jack Coan to commandeer this offense smoothly against a defense that is among the worst he’s seen in recent weeks. With weapons on the ground like Kyren Williams, the Virginia run defense will be up against it. Through the air, Coan has guys like Kevin Austin, Michael Mayer, Avery Davis (questionable), and others who can really lay it on thick. Their strength is their balance, the exact kind of offense that can pick many different routes in which to attack the beleaguered Cavaliers’ defense.

More Picks: Get Friday’s Cincy/South Florida Against the Spread Prediction >>>

An offense like this one is never in a hopeless spot. The ND pass-defense can be a difference-making one, creating turnovers and getting their pass-rush cranked up, but it’s not the stoutest unit by any means. With Brennan Armstrong leading the way at quarterback with 3557 yards already in nine games, along with 27 passing touchdowns and another seven on the ground, Virginia has the top-ranked offense in the whole nation. They can put up points in bunches. Receiver Dontayvion Wicks should eclipse 1000 yards early in this contest, and with four other big-play ball catchers, it’s not a question of whether the Notre Dame defense will incur damage, but how much?

Virginia’s last game made for a bad look, holding a lead then getting wiped off the face of the planet in the second half. And the opposing offensive output made it look like Virginia is one of those all-offense/no-defense teams that never go anywhere. And while that might be true in its essence, they’ve been pretty clutch in some key spots on both sides of the ball this season. A wayward defense will suddenly tighten up late. The offense will pour it on at just the right time. And their last game maybe didn’t bear that out, perhaps making some people low-rate the Cavaliers by not acknowledging the success they had leading up to that spot. And not that having an extra week to ruminate on their collapse to BYU is all that helpful, getting a little extra rest and time to work things out leading up to this home game could be useful in this spot.

Just the image of Virginia chasing BYU up and down the field, combined with the urgency the Irish should have as they put the final touches on their regular-season resume, could make Notre Dame an appealing choice. And Armstrong being taken out of the last game is perhaps a little concerning, as he enters this game with a rib issue. For some reason, I picture the Cavaliers’ offense getting the early jump on the Irish and having that help insulate them against the spread. If the Cavaliers’ defense can salvage anything, I see the offense keeping them in the game, as they cover the spread at home this week. I’ll take Virginia.

Loot’s Pick to Cover the Point Spread: I’m betting on the Virginia Cavaliers plus 5 points. Bet your Week 10 college football picks FREE by taking advantage of a 100% REAL CASH bonus on your first deposit of $100 to $1000 at Betnow Sportsbook!