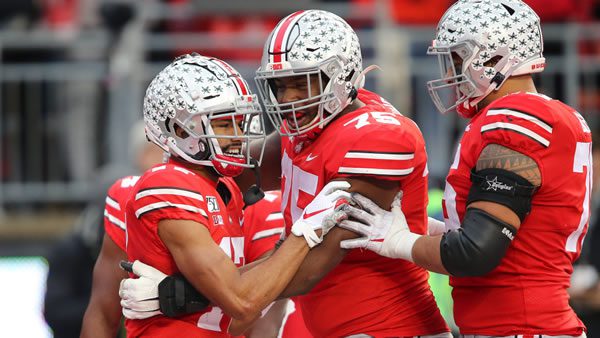 Ohio State Buckeyes (7-1 SU, 4-4 ATS in 2020) at Minnesota Gophers (3-4, 4-3), 9/2/21 When: 8 pm ET Thursday, Sept. 2 Where: TCF Bank Stadium TV: Fox NCAAF Betting Odds: Ohio St -13.5/Minn +13.5 Over/Under: 65.5 The Ohio State Buckeyes made it all the way to the college football national championship game last season, only to get rolled by Alabama. Meanwhile, the Minnesota Gophers, coming off their greatest season since the days of Sandy Stephens last year, disappointed and missed a bowl. The Buckeyes and Gophers open their 2021 seasons and their Big Ten slates when they meet in Minneapolis Thursday night, Sept. 2. Ohio State opened as a two-touchdown favorite for this game, but early betting action dipped the spread just under that magic number. Who do we like here for our free college football betting pick?

The college football betting lines at Bookmaker opened this game with Ohio State favored by 14 points, the over/under posted at right around 65.5. Early betting action then dipped that spread to -13.5. Any bettors out there looking to eschew the point spread on this game could find the Buckeyes at around -550 on the college football money line, with Minnesota getting about +400 to pull the upset.

The Buckeyes began last season, delayed and abbreviated by all that virus-related hysteria, going 5-0 in Big Ten play and then beating Northwestern in the conference championship game 22-10. So Ohio State is now the four-time defending Big Ten champion. The Buckeyes then went into the College Football Playoff national semifinal Sugar Bowl as seven-point underdogs against Clemson but surprised the Tigers 49-28. Unfortunately, Ohio State’s luck ran dry when it lost to Alabama in the national championship game 52-24, whiffing against the spread at +8. This year the Buckeyes only return 11 starters, the second-fewest in the Big Ten. Six starters are back on offense, led by the best wide receiving combo in the college football in Chris Olave and Garrett Wilson (93 catches, 1,450 yards, 13 touchdowns last year) and three along the offensive line. But they must replace QB Justin Fields and will do so, at least for this game, with freshman CJ Stroud. In fact, Ohio State does not have a quarterback on its roster who has thrown a collegiate pass yet. Meanwhile, just five starters are back on defense, following the loss of last year’s top five tacklers. More Picks: Alabama vs. Miami Week 1 Pick ATS The Buckeyes are lined as -200 favorites to win the Big Ten this season, but it will be interesting to see how they perform in this road game against Minnesota and the following week at home against a pretty good Oregon team. The Gophers, meanwhile, after going 11-2 in 2019, opened last season with a bad loss to Michigan and an upset loss to Maryland. They then won three of their next four games to get within sight of a bowl but lost their season finale at Wisconsin 20-17 in overtime. So Minnesota advanced from 5-7 in its first season under Coach Fleck to 7-6 to 11-2, then took a step back last year. Ten starters are back on offense for the Gophers this season, led by junior QB Tanner Morgan (26 career starts), RB Mohamed Ibrahim (1,076 yards, 15 touchdowns last year), and the entire offensive line. And ten starters return on a defense, including last year’s top nine tacklers. Two years ago, in Fleck’s third season here, the Minnesota defense returned seven starters, then held opponents to just 307 yards per game. Last year, with only four starters back, that unit allowed 416 YPG. We expect considerable improvement on that side of the ball for the Gophers this season.

Ohio State owns an 11-game winning streak in the series against Minnesota, going 6-5 ATS in the process. But the Gophers are 3-0 ATS over the last three meetings, keeping games somewhat close while getting bunches of points. Most recently, in 2018, the Buckeyes won 30-14, but Minnesota covered at +30.

Ohio State is the clear favorite to win the Big Ten this season and this game. The only question here pertains to the final margin. But we liked Minnesota’s hire of Coach Fleck five years ago (already?) and expect the Gophers to return to a bowl this season. They’ve got 20 starters back, an experienced quarterback, a great running back, and everybody along both lines. And Coach Fleck already owns wins over Wisconsin, Penn State, and (in a bowl) Auburn during his tenure here, so he’s shown the ability to get his team up for big games. Minnesota might not win this game outright, but we like its chances of covering at +13.5. Question: Where are you betting your NCAA football picks this season? Does your bookie give you -105 odds? Or is he socking you -110? Most likely, the latter! Why pay more for odds when you could be paying $5 less? You should seriously consider making the switch to reduced juice sports betting TODAY! You’ll be so glad you did! Find this killer offer a sportsbook we’ve advertised for over 10 years with not one complaint! —> BetAnySports!