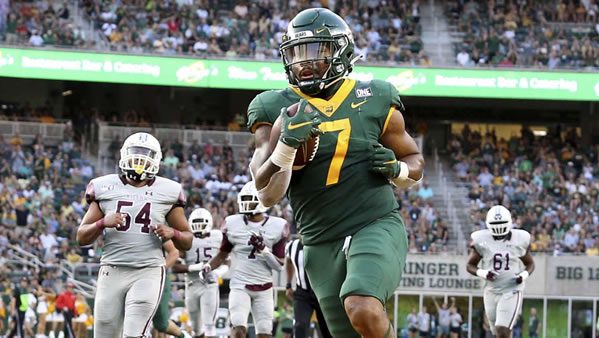 CFB betting odds: Okla -6/Bay +6 (GTBets - Get smoked last week? Most did! Fix that issue by getting a 100% real cash bonus at one of the web’s best bookies!)

Oklahoma’s Sooners, shooting for another berth in the College Football Playoff, battle Baylor’s Bears in a big game in the Big 12 Saturday afternoon in Waco. The Sooners aren’t exactly bombing opponents this season, but they are unbeaten, No. 4 in this week’s CFP rankings, and owners of a 17-game winning streak. Baylor, meanwhile, is beating expectations this year but just suffered a tough loss last week.
Oklahoma’s already played a bunch a bunch of close games this season, and it’s only favored by six points for this one. Which way are we going here with our free college football betting pick?

This week’s college football betting lines opened the Sooners as six-point road favorites for this game, with an over/under of right around 64. Early betting action then dipped that total to 63.

The Sooners are 9-0 on the season after beating Texas Tech two weeks ago 52-21. Oklahoma then had last week off.
OU scored touchdowns on four of its first five possessions of the game against the Red Raiders and led 28-7 at the half. The Sooners then scored the first 10 points out of the locker room and eased home from there for the victory and the cover as 20-point favorites.
Oklahoma out-gained Texas Tech 541-373, and almost half the yardage the Sooners defense gave up came after OU took a 38-7 lead. The Sooners also won the turnover battle 3-0 and turned each takeaway into a touchdown.
Two games ago, Oklahoma actually trailed Kansas in the third quarter before waking up and winning 35-23. And the Sooners have also won five other games by seven points or less. So that win last time out was probably OU’s most complete performance of the season.
At 6-0 in conference play, Oklahoma leads the Big 12 by one game over second-place Oklahoma State. And the Sooners finish their regular season at Stillwater. OU is also No. 4 in this week’s CFP rankings.

CHECK OUT THE REST OF OUR WEEK 11 COLLEGE FOOTBALL PREDICTIONS!

The Bears, meanwhile, are 7-2 on the season after falling at TCU last week 30-28. Baylor drove its first possession of the game 62 yards to a touchdown but trailed 16-14 at the half. The Bears later fell down 30-21 early in the fourth quarter, pulled to within two points with five minutes left, and got the ball back but threw an interception just outside the Horned Frogs red zone with a minute to go.
Baylor got out-gained by TCU 562-393 and lost the turnover battle 2-1, which basically resulted in a -7 points differential.

Prior to last week, the Bears had out-gained and out-rushed each of their previous three opponents, going 3-0 both SU and ATS in the process.

At 4-2 in conference play, Baylor trails 5-1 Oklahoma State by one game and the head-to-head tie-breaker in the battle for second place in the Big 12, which gets you to the Big 12 championship game.

The Sooners own a seven-game winning streak in the series with the Bears, but Baylor is 4-3 ATS over that span, keeping several games close as an underdog. Three years ago, Oklahoma won 34-31, but the Bears covered at +11; two years ago, OU won 30-23 in overtime, but Baylor covered at +9; and last year, the Sooners won 27-14, but BU covered at +23.

In match-ups between two teams ranked in the Coaches Top 25 this season, the higher-ranked outfits are only 15-12 SU, 12-15 ATS.

Oklahoma finally put together a total performance last time out, and the change at QB looks like it’s working. Meanwhile, we just believe Baylor’s been playing a bit over its head this season; nothing wrong with that, but now they run into one of the big boys. So we like the Sooners here, a very good team playing on the road, where spreads are friendlier. Question: Are you still laying -110 odds when you bet on sides and totals? If so, you’d be doing yourself a HUGE favor by educating yourself about reduced juice! It’s the best thing since sliced bread!