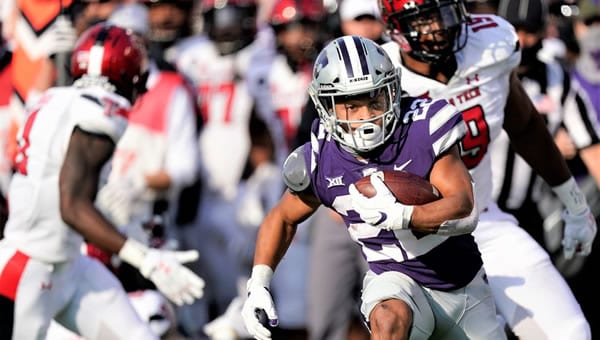 Oklahoma State and Kansas State are both coming off their first Big 12 losses of the season, heading into Saturday afternoon’s match-up in Manhattan. And a second loss will probably prove very costly to one’s chances of making the Big 12 championship game. But more importantly, the Cowboys are favored by almost two touchdowns on the road. Who do we like here for our free college football pick?

College football betting odds opened the Cowboys at right around -10 over the Wildcats, with a total of 51. Early betting action then goosed OSU to -12.5 and dropped that total to 47.

Oklahoma State just suffered its first defeat of this season, falling at home to Texas last week 41-34 in overtime. The Cowboys led the Longhorns 7-0 early and 24-20 at the half. OSU then appeared to take control of the game when it went up 31-20 early in the third quarter, but it immediately gave up a 100-yard kick-off return for a score, and it was “game on” from there. In the end, the Cowboys forced OT with a field goal with five seconds left, but they gave up a Texas touchdown at the top of the overtime inning and came up empty on their offensive possession.

Oklahoma State lost that game outright as a 3.5-point favorite and the game played over its total of 59.5 in regulation.

The Cowboys out-gained the Longhorns 530-287 and won first downs 32-17. But they also lost the turnover battle 4-0, resulting in at least a -20 points differential.

OSU started 4-0 this season, with wins/covers over West Virginia, Kansas, and a pretty good Iowa State.

Kansas State, meanwhile, just had a four-game winning streak snapped by a 37-10 loss at West Virginia last week. The Wildcats grabbed an early 3-0 lead on the Mountaineers, then gave up the next 24 points and trailed 24-10 at the half. KSU then came up totally empty in the second half and whiffed ATS as a five-point dog.

Also, that game played over a total of 45.5 when West Virginia kicked an otherwise meaningless field goal with 10 minutes to go.

In other words, K-State got its butt kicked.

Prior to that, though, the Wildcats won/covered four games in a row against Oklahoma, Texas Tech, TCU, and Kansas. And those last two victories came after losing starting quarterback Skylar Thompson for the season to a shoulder injury.

Big picture, at 4-1 in conference play, Kansas State is tied for the lead in the Big 12 with Iowa State, with 3-1 Oklahoma State a half-game back.

These teams have played two common opponents so far this season; the Cowboys beat West Virginia 27-13 and Kansas 47-7, while the Wildcats beat the Jayhawks 55-14 but lost to the Mountaineers 37-10.
Cowboys vs. Wildcats Recent History

Oklahoma State is 6-4 SU over the last ten meetings in this series, but Kansas State is 7-2 ATS over the last nine, pulling a couple of upsets, keeping other games close as an underdog. Last year, though, the Cowboys popped out to a 13-0 lead, pushed that to 23-3, won 26-13, and covered as four-point favorites.

We like what Coach Klieman is doing at K-State, but we don’t like his chances Saturday. Oklahoma State is just the better, more experienced team on both sides of the ball. Plus, playing on the road, even in these strange days, means the spread is a bit more amenable. We’ll give the points here with the Cowboys. Hey! Your bookie is over-charging you! Stop laying -110 on games! Start laying only -105 at BetAnySports! Anything less is a complete waste of your hard earned cash!