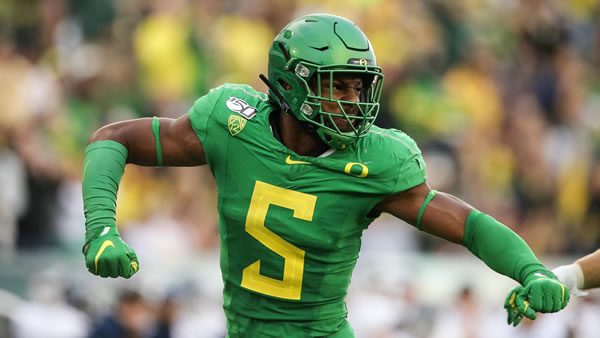 Point Spread: ORE +3/UTAH -3 (Betanysports - Did you know that you don’t have to bet on games at -110 odds? You can bet at a discounted price here! Be SMART!)

The Oregon Ducks come to Salt Lake City for a big Pac-12 showdown with the Utah Utes on Saturday. The way things are shaping up, this could be a preview of the Pac-12 Championship, with each team in first in their respective divisions. But neither can avoid a loss if they want to keep it that way. The Utes did their part on Saturday, beating the Arizona Wildcats, 38-29, but not coming close to covering the spread. They take on an Oregon team that won their ninth game of the season on Saturday with a 38-24 win over Washington State at home. With big things in their sights, they turn their attention to a tough matchup with the Utes on the road.

Even for a Pac-12 team, Utah is under the radar, at least in comparison to the more high-profile Ducks, who have already made statements on a national stage. Following two straight conference wins over Stanford and Arizona on the road, they now return home, where they’ve been markedly better, winning all their games by a comfortable margin. It’s not an easy place to play for Oregon against a team that really seems to flourish in this stadium.

Utah doesn’t possess any stars on its team that will get anyone’s blood pumping. But what they do have they’re able to deliver nearly every week with consistency. Cameron Rising isn’t lighting the world on fire at quarterback, but he is efficient and doesn’t undermine the team. Tavion Thomas (questionable), Micah Bernard, and TJ Pledger make for a nice trio of backs with a varied cast of ball-catchers. Whatever they’re doing has been working at a clip of 35.7 points per game.

Good Spot for the Oregon Offense?

This is another aspect of the Utah team that seems to thrive in this stadium, with none of their conference opponents eclipsing 24 points in scoring here this season. They might get challenged to a greater extent this week, but they have a lot at their disposal. One is balance, as they have performed capably against both the run and the pass this season. Their front seven is a difference-making bunch, with Devin Lloyd, Mika, Tafua, and Van Fillinger getting after the quarterback. But defenses that might fare well in certain conference spots still have to see it work against Oregon, which might not be as easy.

Not that Utah is a team prone to being dominated by opposing running attacks, but they aren’t particularly outstanding up-front from a run-stopping perspective. They’ve also not seen teams like Oregon who can lay it on thick with the run-game. Even with personnel losses in this area, they are robust between the contributions of QB Anthony Brown, RB Travis Dye, and rising back Byron Cardwell. With familiar names like Johnny Johnson, III. (questionable), Devon Williams, Jaylon Redd, and other contributors, the aerial damage is sporadic in spots but bound to sprout at any time.

Losing their top back, a low-key presence in QB Anthony Brown, and some close games and a loss to Stanford make it easy to consider Oregon, a less-than elite team that can be had. And while that might end up being true on some level, it would be wise not to confuse their lack of entertainment value with their merit. Brown makes few mistakes and is a playmaker with his feet and occasionally his arm, as well. The Ducks have navigated their way through the conference with one hiccup, with most results not being close. They beat an Ohio St. team on the road that hasn’t lost since.

The Ducks’ defense could have a big say on this game. With Noah Sewell and Kayvon Thibodeaux patrolling the front, opposing quarterbacks are under siege. The Ducks are solid against the run, which is Utah’s clear preferred offensive approach. A secondary that has dealt with injuries can sometimes be porous, but they are also ball-hawks who can flip the script in a game. But while Utah quarterback Rising doesn’t elicit awe with his aerial prowess, he has just two picks on the season and, with 14 TDs, more end-zone connections than Brown.

For Utah, the plan will be to take advantage of a nice home-field advantage, with weather aiding in their desire to deaden the game, reduce big plays from Oregon, and hang around with a shot to win late. That’s definitely plausible, and there have been times this season when the Oregon offensive attack was made to look listless by worse defenses than Utah’s. But if Oregon is able to set forth a scenario that deviates from Utah’s plans, it doesn’t bode well for the home team. It’s hard to envision a game where the Utes are able to match Oregon play-for-play if the Ducks starting dialing it in offensively. A slugfest might be a little out of the Utes’ realm.

While some potential edges on paper may exist for the Ducks, the combination of the game’s locale along with Utah’s ability to make a game a stinker could flummox the Ducks. It’s easy to defer to the Ducks having all these big things at stake beating a team that couldn’t even beat the Beavers. I just see Utah making it a real grind where Oregon might be up against it at the end. I’ll take a whirl on the Utes this week.

Loot’s Pick to Cover the Point Spread: I’m betting on the Utah Utes minus 3 points. Bet your Oregon/Utah pick and ALL your week 12 college football predictions for FREE by taking advantage of a 100% REAL CASH bonus on your first deposit of $100 to $300 at MyBookie Sportsbook! (Must use bonus code PREDICT100 in order to qualify for the special bonus). Click here to sign up now!