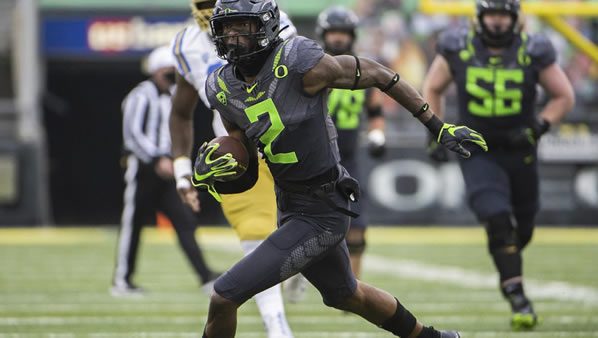 The Oregon Ducks make the trip north to take on the Washington Huskies in Seattle in Saturday Pac-12 action from Husky Stadium. After an upset loss several weeks ago, the 7-1 Ducks are back on track after winning their third straight win on Saturday over Colorado, 52-29. At 7-1 and ranked 7th, they now take on a Washington team that looks to have found some answers after their second straight win on Saturday, a 20-13 triumph over Stanford on the road. Now at home, they look for their biggest win of the season. Or will the Ducks keep the ball rolling, as they look for something big this season?

Obviously, wins over the likes of a really down Arizona team and a sliding Cardinal squad aren’t enough to warrant a Washington renaissance, it’s a step up from where they were. Starting the conference schedule, the Huskies labored to an OT win over Cal, before missing the spread by a ton in consecutive losses to Oregon State and UCLA. The offense was stuck in reverse with the “D” not doing its share of the heavy lifting. In the last few weeks, however, we see the Washington defense really flexing its muscles.

The state of the Washington offense remains in a bit of disarray. There isn’t much they do well and in the last four games, we’ve seen a 17-24 point output each week. Their run-defense remains a sore spot and going against Oregon might be the last team you want to see in the Pac-12 with a run-stop problem. It’s also a defense that registers a bit low in the big-play category, with a pass-rush that doesn’t always materialize. But if the Ducks are looking to flex their offense aerially, that might not be easy against a Huskies’ pass-defense that is actually ranked tops in the whole country.

Some matchup components would seem to shake out well this week for the Ducks. Winners of 14 of the last 16 installments of the “Border War,” Washington has won two of the last four, but Oregon has been dominant in this spot otherwise. The Washington defense will be facing a run-heavy Ducks offense, one that might have found some answers with Morse High’s very own Byron Caldwell, who ran for 127 yards on Saturday. With Travis Dye adding two scores on the ground, maybe the Ducks have found some answers in the run-game after losing CJ Verdell. They got a 300+-yard game from QB Anthony Brown and more balance could really take this Oregon offense places this season.

There have been times recently where we see the Oregon “D” not thriving within the Pac-12, with some dicey showings against Stanford, followed by allowing a combined 60 points to UCLA and Colorado the last two weeks. Injuries have taken some chunks out of them. But Washington has not been able to air it out much this year, at least not to the extent where they would appear to be a stern test for the Oregon pass-defense. And with a run-game that often times appears stuck in mud, they will be operating this week at a distinct offensive deficit. QB Dylan Morris can maybe air it out some, but we’re still looking at a team that hasn’t eclipsed 21 points the last three weeks, so this would be a strange spot to see a surge. Hats off to Morris, though, for the late TD that helped lock up the win on Saturday.

Hope for the Huskies?

Perhaps this game is coming at the right time for the Huskies. Granted, they are beneath the Ducks in the overall conference pecking order. But they have to be feeling pretty good after resuscitating their season with two straight comeback wins. The way they won those games could give them a boost. The offense is showing at least some signs of life, with Morris helping galvanize the offense with his late clutch-play. Sean McGrew ran for over 100 yards last week, finally getting something substantive from the ground-game.

Washington returns home for the first time in three weeks, with their last home-showing being a loss to the same UCLA team the Ducks edged at the Rose Bowl a few weeks back. They hope their defense can prevent the Ducks from gaining substantial foothold, while they resourcefully chip away on offense and keep this close. With all the Huskies’ conference games being of the one-score variety, that it their M.O. It hasn’t always worked, but opponents have also found it challenging to get any separation from a Huskies team where it looks achievable to do so. And sure, Oregon bounced a down Colorado team around last week, while also beating an even more-down Arizona team conclusively. But they only got separation from Arizona late and other than last week, their conference games have been grinding uphill battles. On the road at Washington might not be the breeziest of spots.

Languid offense and one-dimensional defense aside, there is just something about this game that suggests a competitive type of grinding affair played in less-than ideal conditions in Seattle. I think we’re looking at a bit of a slog with a big dose of run-game from both offenses. Oregon’s edge in certain categories and being a more well-rounded and dependable football team could register into a more-than-one-score win, but I think taking the points is the positive move in what seems to me to be a game that comes down to the wire. I’ll take Washington in this one.

Loot’s Pick to Cover the Point Spread: I’m betting on the Washington Huskies plus 6.5 points. This is a GREAT game to do with live betting! Most bookies only offer live lines during commercials. Bovada Sportsbook offers them every minute of the game!