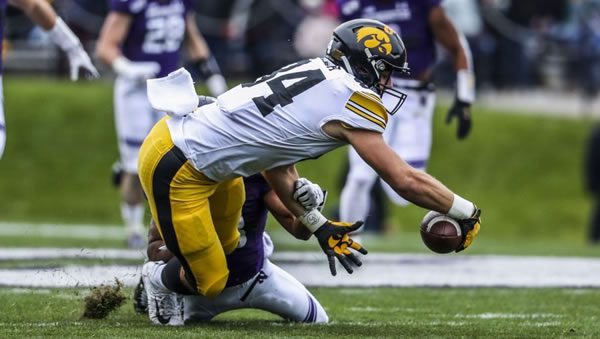 Two of the best defenses in the country match up in Iowa City, as Penn State and Iowa have been lights out on the defensive side of the ball en route to a 5-0 start that has both teams on track to possibly reach the Big Ten championship game and the College Football Playoff. Iowa shook off any possibility of a letdown on Friday in College Park by blasting Maryland off the field in a 51-14 shellacking, while Penn State locked Indiana down completely in a 24-0 whitewashing to set up this matchup of top-five squads.

A win here would put Iowa firmly in the driver’s seat to represent the West, as the Hawkeyes don’t play Ohio State and would likely be favored in every game they play over the rest of the campaign. On the other hand, Penn State still has to deal with the Buckeyes and needs to keep its strong play against the Hawkeyes rolling if it hopes to return to the Big Ten title game for the first time since 2016. The Nittany Lions fell to the Hawkeyes last year in University Park, but prior to that, Penn State had won six straight in this matchup, including its past three visits to Iowa City.

How the Public is Betting the Penn State/Iowa Game

The line is dropping quickly, as sharp money is coming in on the Nittany Lions, bringing the spread down from an opening of -3 to the current -1.5 for Iowa. The public likes the Hawkeyes, however, as 58 percent of tickets have come in on Iowa. The total has dropped two points, falling from 42.5 to 40.5.

When you think of Penn State football, you usually don’t find yourself thinking air it out. But that’s what the Nittany Lions have done for their offense, as they’re averaging 286 yards per game through the air. That’s what’s possible when you have the likes of Sean Clifford at quarterback, and the Nittany Lions are almost exclusively riding his arm to move the ball.

The good part of this situation is that Penn State’s passing attack hasn’t really been stopped, as nobody has found an answer for Jahan Dotson this season. The problem is that Penn State doesn’t have much on the ground, and against Iowa, that can be a recipe for disaster. The Hawkeyes haven’t allowed anyone to move the ball on them all season, and if Penn State focuses too heavily on the pass here, it’s not likely to have a lot of success. Noah Cain might have to step up in this one.

Spencer Petras is frustrating to bet on, but at the end of the day, he gets the job done because he has a fantastic defense backing him up and doesn’t try to force too much to happen. Petras has thrown seven touchdowns against one interception on the season, and while he isn’t spectacular by any means, he also won’t lose you the game.

Iowa would much prefer to put the game in Tyler Goodson’s hands and let him carry them to a win. The halfback has five scores on the season, and unlike Penn State, Iowa is very committed to the run. Petras will only throw when it’s really necessary, and most of the time, it isn’t. Iowa beats you by overwhelming your offense and giving itself short fields, not by overwhelming your defense with its performance.

These teams played the infamous 6-4 game in 2004 in University Park, and things haven’t gotten a heck of a lot better since then. The past two outings in Iowa City have been tight, low-scoring affairs, combining for 40 points or less in three of the past four matchups at Kinnick. Penn State has dominated this series both straight up and ATS, as the Nittany Lions are 6-1 in the past seven matchups and 5-2 ATS in that stretch.
Penn State has also been a cover machine in conference play, covering in its past six league games. But Iowa has been a great bet itself as of late, covering in four straight in the Big Ten and six of their past seven overall. The under has been almost automatic for Iowa thanks to its defense, cashing in five consecutive games at Kinnick.

This could be a bit warmer than people expect for October, with temperatures pushing into the high 70s and possibly lower 80s. Wind could be a factor in this one, especially with field goals likely to be a big part of the game, as wind will blow at 14 miles per hour.

The Iowa defense looks to be the best this side of Georgia, and I’m not sure Penn State really has an answer. I think the Nittany Lions are a strong defense but a bit inflated by getting to play against a weak Wisconsin offense and an Indiana team that can’t get out of its own way. I’m backing Iowa here. Bet your Week 6 college football picks for FREE by taking advantage of a 100% REAL CASH bonus on your first deposit of $100 to $500 at GTBets!