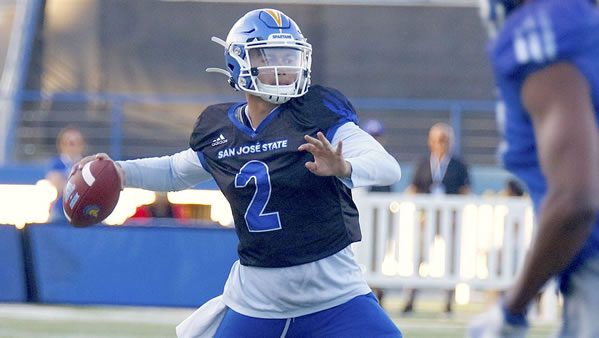 Point Spread: Spartans -7/Bulldogs +7 (Bet it for free with a 100% bonus when you use bonus code PREDICTEM at Betnow Sportsbook!)

This year, Spartans have an overall record of 4-1. In addition, they have also played well in
the Mountain West, going 2-0. This season, the Spartans have been favored in 4 games while
posting an ATS mark of 4-1-0. Their average over-under betting line is 48.6 leading to an
over-under record of 1-4-0.

In their last game, the Spartans are coming off a 40-7 win over UNLV. In addition, they added
an ATS win, as they were 6.5 favorites on the spread. In the win, San Jose State completed 66.7%
of their 27 passes, 2 of which resulted in touchdowns. The team ended the game with 3 rushing
touchdowns, along with a total of 203 yards on the ground.

The Bulldogs have an overall record of 1-4 coming into this week’s game. They are currently
0-1 in Mountain West action. This season, the Bulldogs have been favored in 1 game while posting
an ATS mark of 0-4-0. Their average over-under betting line is 45.4 leading to an over-under
record of 2-2-0.

Fresno State is coming of a 20 point loss to Boise State by a score of 40-20. The Bulldogs
entered the game as 10.5 point home underdogs, making this an ATS loss. For the game, the Fresno
State threw for 134 yards, but did not come up with a passing touchdown. Their overall completion
percentage came in at 53.8%. The team ended the game with 2 rushing touchdowns, along with a
total of 99 yards on the ground.

Quarterback Jake Haener comes in the game having completed 75 of 105 passes for a passer
rating of 104.23. [‘But, leading up to the game, he is listed as questionable on the injury
report (Ankle).’] Through the air, the team will be looking for a big game from leading receiver,
Jalen Cropper. On the season, he has caught 30 for 307 yards. The Spartans have turned to running
back Jordan Mims a total of 87 times for a total of 409 rushing yards.

Over their last 10 games, the Spartans have covered the spread at a rate of 60.0%. In these
games, they posted a straight up mark of 6-4-0. On average, the team scored 24.8 points while
allowing 22.6, leading to a positive scoring differential.

In their last 5 games away from home, the Spartans have a straight up record of 2-3-0 while
going 4-1-0 vs the spread. The team’s offense averaged 22.8 points per game in these
contests.

Against the spread, the Bulldogs have gone 3-7-0 over their last 10 games. Straight up they
have a record of 5-5-0. Their last 10 over-under record comes in at 4-6-0. Fresno State has a
positive scoring differential in these games, averaging 26.7 points per game and allowing
24.6.

Through their last 5 home contests, the Bulldogs offense has averaged 29.2 points per game
while allowing an average of 22.6. Fresno State posted an overall record of 3-2-0 while going
1-4-0 ATS.

Heading into this week’s matchup, the Spartans will look to improve their offensive output, as
they are ranked just 76th in the NCAA in points scored.

Although San Jose State has struggled to move the chains on 3rd down thoughout the season,
they have a chance to take advantage against a Fresno State defense that is allowing an average
of 29.2 points per game and has had its problems getting off the field on third down.

One aspect of the game that could benefit a San Jose State offense that struggles to generate
big plays in the passing attack is that they are facing off a Fresno State defense that has yet
to generate a lot of pressure on opposing quarterbacks. So far, the Bulldogs are just 120th in
sacks per game.

So far, the San Jose State offense is averaging just 115.2 yards per game on the ground. This
production has come on an average of 31.2 rush attempts per game (111th). This week, the Spartans
will be facing a Fresno State defense ranked 181st in rush yards allowed per game. This year,
they have averaged 115.2 yards per game when facing defenses ranked outside the top 50.

Heading into this week’s matchup, the Bulldogs will look to improve their offensive output, as
they are ranked just 101st in the NCAA in points scored. However, a matchup against San Jose
State’s defense figures to be problematic, as they are allowing just 14.0 points per game.

So far, the Fresno State offense is averaging just 119.4 yards per game on the ground. This
production has come on an average of 31.0 rush attempts per game (113th). This week, the Bulldogs
will be facing a San Jose State defense that is ranked 62nd in rush yards allowed per game. So
far, they are averaging 124.5 yards per game when facing defenses ranked outside the top 50.

Heading into the game, the Bulldogs will hope for some improved play from their defense, as
they are currently 89th at 29.2 points per game allowed.

San Jose State -7. Question: When you bet on games with your bookie, do they charge you -110 odds or higher on sides and totals bets? Did you know that you could be laying -105 instead? Find this killer offer at one of the web’s best sports betting sites —> BetAnySports!