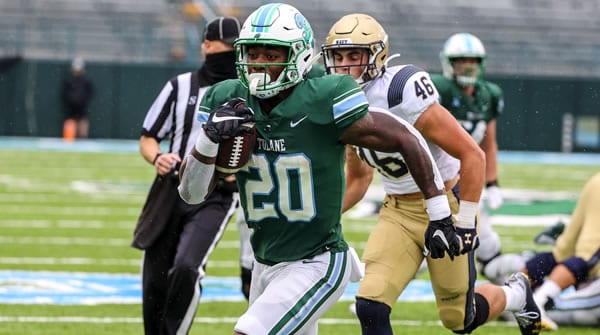 Is SMU finally ready to again take its place among the elites of college football? The Mustangs had one of their best seasons since the Pony Express glory days of the 1980s last year, and their win over Memphis showed that they’re still a force to be reckoned with. But one thing SMU has never been able to do since the program received the death penalty in 1987 is a sustained success, which is why this has all the makings of a trap game for the Mustangs. That’s especially true given what lies ahead, as SMU would host Cincinnati next week in a battle of unbeaten teams and the program’s biggest game in years — if it can avoid stubbing its toes against Tulane.

One thing the Mustangs haven’t had to worry about since joining the American is their annual battle with Tulane. SMU has never lost to the Green Wave as a member of the American and had little trouble with Tulane last year in a 37-20 victory. But that was in Dallas, not New Orleans, and the Wave have given SMU fits when the Mustangs have had to come to Louisiana. SMU has won five of the past six meetings in New Orleans, but only one of those five wins came by more than seven points. When it wants to run it, Tulane has been rock solid on the ground, and SMU’s run defense remains rather suspect. Can the Green Wave catch SMU looking ahead to Cincinnati on a weeknight — a time that often lends itself to upsets?

How the Public is Betting the SMU/Tulane Game

The total has dropped two points from the high of 69, and the line has come under the key number of seven to the current 6.5.

Tulane:
Running backs Tyjae Spears (knee) and Corey Dauphine (Achilles) are both out for the season.

The Mustangs received some awful news to start the week when they learned that both McDaniel, their top running back, and Roberson, their top wide receiver, are done for the season. McDaniel barely played against Memphis, as he was injured after just one carry against the Tigers. Without McDaniel, the Mustangs’ ground game ground to a halt, as they averaged a mere 2.9 yards per carry for the game.

But they were just fine against Memphis because Roberson had an outstanding performance against the Tigers, catching five passes for 243 yards and two touchdowns. However, Roberson went down in the second half, and the Mustangs did next to nothing the rest of the game, scoring just three points after Roberson went out.

So, where does SMU turn from here? Ulysses Bentley has some eye-popping numbers on the ground based on performances against North Texas and Stephen F. Austin, but Stephen F. Austin is an FCS school, and North Texas has an awful defense. Against Memphis and Texas State, Bentley has only managed 81 yards on 24 carries, which is not good. Meanwhile, Roberson was a full third of the SMU passing attack. There’s going to be a lot of pressure on Shane Buchele to show that he can lead this offense without his two best weapons, something he didn’t really do against Memphis. In fairness to him, though, he only had minutes to react to losing both McDaniel and Roberson, whereas now he’s had a full week of practice to prepare for the Mustangs’ new reality.

BET THIS GAME FOR FREE! DEPOSIT $100 TO $300 AND GET A 100% REAL CASH BONUS AT ONE OF THE WEB’S BEST COLLEGE FOOTBALL BETTING SITES: MYBOOKIE!

Last week, I said Tulane would run the ball well against Houston after they’d had success against Southern Mississippi. And oh, how the Green Wave proved me wrong. Tulane averaged just 1.6 yards per carry in blowing a 24-7 lead and wasting five Houston turnovers (and it should have been six if not for a blown replay bailing out the Cougars on a muffed punt). If not for Houston straight-up shooting itself in the foot repeatedly, Tulane would have lost that game by 40 points.

So it’s time to cut bait on the Green Wave and back SMU, right? Not so fast. Tulane’s running game was horrid against Houston, but the Cougars had a deep, healthy, and experienced front seven that had shown in past seasons that they could stop the run. They just hadn’t had a chance to show that they could still do so in 2020.

SMU, on the other hand, has shown that it cannot stop the run. Worse, SMU has shown that it cannot stop the run against rushing offenses that are far worse than Cameron Carroll and the Green Wave’s offensive line. North Texas and Memphis both gashed the Mustangs for more than 200 yards, and Texas State nearly did the same. Plus, even after getting held to two yards a carry at Houston, Carroll is still averaging 5.3 yards per carry. Against this defense, Tulane should be able to do what it couldn’t do against the Cougars.

Clemson at GTech Against the Spread Play

SMU is a strong football team in Dallas. But this game won’t be played in Dallas, and on the road, SMU really struggled against Texas State. The Mustangs have covered just once in their past five away from home, and they’re facing a team that knows how to play on its home turf. Tulane is 7-1 ATS in its past eight home games, and it’s also been an outstanding bounce-back team. In their past seven games following a straight-up loss, Tulane has covered in six of them. The Green Wave are also a team to wager against as a home dog at your own risk, as they’ve covered in five consecutive at Yulman Stadium when they’re getting points.

As far as the total goes, it might be wise to bet the under here. For one, we don’t know what SMU’s offense is going to look like after the injuries. For another, the under has cashed in five of SMU’s past seven and in four straight games where Tulane was a home dog.

It should be a fine night for football in New Orleans, with temperatures at 73 degrees and partly cloudy skies.

I’m going to look really foolish if Tulane comes out and plays poorly again, but I don’t think the Green Wave will have anywhere near as many problems with SMU’s defense as they did with Houston. Plus, the Mustangs’ injuries to their top skill positions scare me far too much to trust them with getting a touchdown against what should be a motivated opponent that tends to play them tough at home.

Throw in that SMU’s got this game sandwiched between Memphis and Cincinnati, and the signs point to the Mustangs being ripe for the upset. Having learned absolutely nothing from last week, I’ll take Tulane and the points. Are you a college kid on a shoestring budget but wants some action? Deposit $25 and get a FREE $50 bet at Intertops Sportsbook! The best college kid bonus on the web!