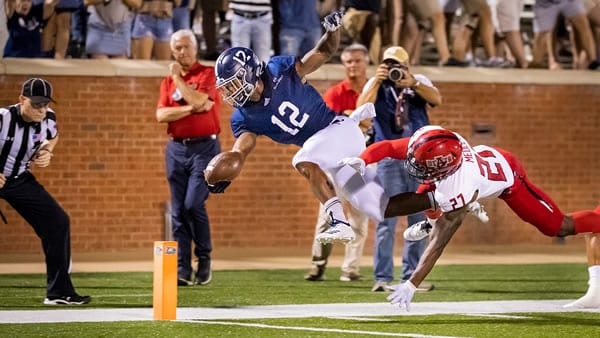 Point Spread: USA +5.5/GASO -5.5 (Bovada – What more could you ask for? 50% real cash bonus up to $250, BEST live betting platform on the web, rebates on ALL your bets win, lose or draw AND fast, no-hassle payouts! Dump your book and start playing with the class of the betting industry today!)

The Sun Belt has been the home of high-powered offenses, but this game might be the exception, as these two teams are more defensive-oriented. Georgia Southern gives up only 20.8 points per game, and the Eagles have done it despite having to play all of their conference games on the road. Thanks to a few bouts with COVID, Georgia Southern has seen a game postponed and a non-conference home game called off, which means this will be the first time all season that they’ve played a conference game in Statesboro.

South Alabama has faced the opposite situation, having played all of their conference games at home and facing a relatively weak slate of opponents to this point in the season. In fact, the Jaguars haven’t played a road game since their season-opening win against Southern Mississippi, a span of nearly two months without leaving Mobile. Facing a tough defense might be a serious problem for South Alabama, as their results have been predicated entirely on their ability to put points on the board. When the Jaguars hit 30 points, they’re 3-0. When they don’t, well…you can do the math on that one.

How the Public is Betting the South Alabama/Georgia Southern Game

The total has dropped a point from the opening, falling from 50.5 to 49.5. The line has remained unchanged.

When South Alabama Has the Ball

Desmond Trotter is back on the field for South Alabama, and the Jaguars’ signal-caller has been careful with the football since returning to the lineup. Over the past three games, Trotter hasn’t thrown an interception, tossing four touchdowns in the process. He missed the Jaguars’ worst performance of the season against UAB, and the offense has appeared to be in much better shape with him on the field.

The problem is that the Jaguars are a bit too one-dimensional on offense, as the running game has seriously left a lot to be desired. Carlos Davis can be counted on for about 20 carries a game, but the Jaguars tend not to get enough of a push for him to take over the game. The only time Davis topped 100 yards in a win was the game against Texas State, and he needed 32 carries to reach that total.

That’s simply not going to get it done, and the Jaguars are going to need to rely on receivers Jalen Tolbert and Kawaan Baker in order to keep pace with the Eagles. Between them, the two have 10 of the Jaguars’ 11 receiving touchdowns, and at least one will need to have a big night.

When Georgia Southern Has the Ball

What Georgia Southern’s offense will look like depends primarily on whether Shai Werts is able to play. If Werts can go, the Eagles will have an experienced passer under center who’s able to hurt the Jaguars with both his arm and his legs. Werts has thrown it more in his senior season, as he’s already got more than half as many pass attempts as he’s had in any previous season. However, Georgia Southern is still an option-oriented team that relies on power running and clock control.

That means that Werts, if healthy, will spend most of the night either keeping the ball or pitching to J.D. King and Wesley Kennedy. King is the most dangerous back on the Eagles’ roster with four touchdowns and 490 yards on the season, and he might have to shoulder a bigger load if Werts is unable to go. The next man up at quarterback, Justin Tomlin, has minimal collegiate experience and will likely rely on his legs and his backs even more than the Eagles already do with Werts. It’s taken four years for Werts to trust his arm enough to make it a regular part of the Eagles’ attack, and Tomlin likely won’t be given that kind of freedom. There’s a reason that South Alabama’s Jalen Tolbert has more yards and just one fewer catch than the top four Georgia Southern receivers put together.

Four different coaches have taken Georgia Southern into a matchup with South Alabama over the past six seasons. All of them have been successful, as the Jaguars have never beaten the Eagles and usually haven’t come close. Last year’s 20-17 loss in Mobile marked the first time in the series that the Jaguars had kept their margin of defeat within two touchdowns, as the Jaguars have usually been helpless against the triple option.

That’s been even more true when South Alabama has made the trip to Statesboro. In three visits to Paulson Stadium, the Jaguars have been outscored 155-30 and haven’t held the Eagles under 48 points. Interestingly, the over has hit on all three occasions in Statesboro, while the under has hit in all three games between the teams in Mobile.

When it comes to spread betting, there hasn’t been much suspense between these teams, especially in Statesboro. South Alabama’s closest loss at Paulson Stadium was a 48-13 beating in 2018, as Georgia Southern has easily covered the number in every meeting in the series, except last year’s edition in Mobile.

With thunderstorms in the area and 86 degree temperatures, the weather could play a significant role here and would heavily favor Georgia Southern’s running game.

With bad weather coming and South Alabama making its first road trip since the opener to a stadium that has served as its personal torture chamber, I see little reason to even touch the Jaguars in this game. The weather, the history, and the way that these teams like to play all favor Georgia Southern, and in fact, the only reason this game might be in doubt from my perspective is the health of Shai Werts.

For that reason, I’d wait to make sure that Werts is healthy enough to play before putting your money on the Eagles. If he cannot go, I’d wait to live bet this game and see if Tomlin can direct the offense properly before I get some skin in the game. But if Werts is on the field, I see little reason to expect South Alabama to slow him and King down. As long as Werts plays, I want the Eagles to cover in this game. Question: When you bet your games, is your bookie charging you -110 odds on sides and totals? If so, YOU ARE OVERPAYING! Did you know that you can bet on games for cheaper (aka: reduced juice) -105 odds? Why pay more for the very same product! Dump your expensive book TODAY and start betting smarter and saving big money at BetAnySports Sportsbook! Home of -105 odds sides and totals!