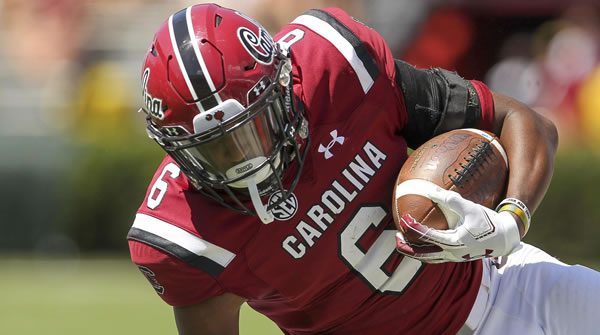 Georgia looks like it could be a genuine national championship contender, while South Carolina looks like it’s going to have a tough time finishing in the top half of the SEC East. The Gamecocks did manage to survive against a decent East Carolina team, but that’s nothing compared to Georgia’s start to the year, as the Bulldogs shut down Clemson and then smashed a solid UAB squad that might compete for the title in Conference USA.

There’s also the revenge factor working for Georgia: the last time the Gamecocks came to Athens, they left with a stunning victory when Rodrigo Blankenship missed a kick in overtime. Georgia won by 29 last year in Columbia, and the Bulldogs have won five of their past six meetings with South Carolina. As long as the Bulldogs play the kind of defense they did against Clemson, they shouldn’t have any issues with the Gamecocks.

How the Public is Betting the South Carolina/Georgia Game

The money is coming in on Georgia, even as the tickets come in on South Carolina, which says the public is a little spooked by this huge number. The spread has jumped from -30.5 to -31.5, with Georgia only getting 39 percent of the tickets. The total has jumped slightly, moving from 48 to 48.5

When South Carolina Has the Ball

There really wasn’t a lot to like about South Carolina’s offense in its win against East Carolina. The Gamecocks didn’t really commit to the ground game, even though Juju McDowell averaged 6.5 yards a carry on his 11 touches. Instead, South Carolina spread the carries around to multiple backs and often found itself getting little offense going. The Gamecocks finished with 106 rushing yards on 39 carries, which won’t be close to good enough against Georgia.

To have a chance, Josh Vann is going to have to find holes in the Georgia secondary, and Zeb Noland will have to find time to get the passing game going. Vann hauled in five catches against East Carolina for 116 yards, but he also lost a fumble, as did Dakereon Joyner. Above all, South Carolina cannot turn the ball over; it’s going to be hard enough for the Gamecocks to get anything going without stopping themselves.

If Georgia is at full strength with J.T. Daniels under center, the offense should be in top shape. If he’s not, Stetson Bennett will again go after torching Alabama-Birmingham in his return to leading the offense. Bennett is a capable backup, good enough to beat the mid-tier SEC teams but not good enough to push the Bulldogs to an elite level.

Daniels, on the other hand, can make Georgia a top-tier offense to go along with its world-class defense. Against South Carolina, he didn’t make a lot of throws, but he did toss two touchdown passes and completed 62.5 percent of his throws. He might have to be better than he was a season ago, but Zamir White should help take some pressure off of him. He rushed for 74 yards against Clemson, and this should be a spot where he gets a fair amount of touches to keep the Bulldogs’ offense moving.

Betting on South Carolina has been a bit of a fool’s errand as of late, as the Gamecocks have just one cover in their past eight contests. The Gamecocks have also really struggled when they’ve been the underdog, as they’ve gone 0-6 ATS in their past six games against the SEC. On the other hand, Georgia has tended to be a reliable play for bettors, covering in four of its past five games.

The humidity could play a factor, as could a late thunderstorm in the evening. Temperatures will hover in the low 70s, but almost no wind will be present, so for now, that looks like it won’t affect the players much.

Nobody from Georgia has forgotten how South Carolina went between the hedges and shocked Georgia in 2019, and I’ll be very surprised if Georgia allows the Gamecocks to hang around in this contest. The Bulldogs’ only worry with the spread is whether they can actually score that many points, but I think they’ll do enough here to keep the game well out of reach.
I’ll take the Bulldogs to score a win in a rout. Bet ALL your Week 3 college football picks for FREE by taking advantage of a 100% REAL CASH bonus on your first deposit up to $1000 at Betnow Sportsbook!