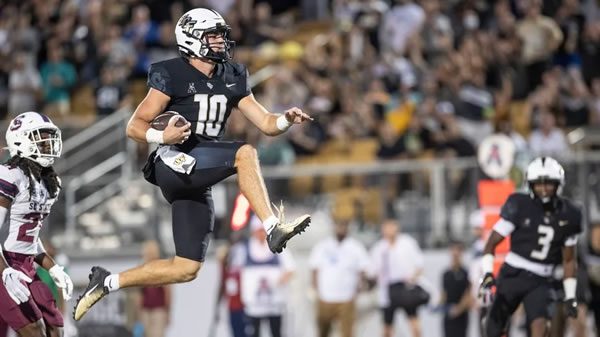 Point Spread: TEM +23/UCF -23 (Bovada – The best sportsbook on the web! 50% bonus up to $250! The BEST live wagering platform on the planet! Rebates on ALL your sports bets; win or lose! FAST crypto payouts! What more could you ask for!)

The Temple Owls come down to Orlando on Thursday for an American Athletic Conference showdown with the Central Florida Knights. A 41-19 win over SMU on the 5th was the Knights’ last appearance, a win that pushed them to 4-1 and gave them their third straight win since losing their only game on the season to Louisville in their second game of the season. They look for another conference win on Thursday against a Temple team coming off a 24-3 loss to Memphis back on the first. They get a little rest coming into this but still face a tall order in Orlando. Can they be scrappy, or will the Knights hold down the fort and cruise to a cover? Let’s break this one down!

While they did beat Lafayette and UMass, it’s been an otherwise tough season for the Owls, as they struggle mightily in spots. Against the better teams they’ve faced, the offense has ground to a halt, and points have been hard to come by. Coming up with a lone field goal in two games against Duke and Memphis attests to that, as did an unsightly 16-14 loss to Rutgers. These point totals in the three toughest games they’ve played this season should warrant concern coming into a spot like this—on the road against a good conference opponent.

Temple head coach Stan Drayton will struggle to find reliable sources of points as they get into the real meat of their conference schedule. Nothing against guys like quarterback EJ Warner, receiver Jose Barbon, or other talented players they have, but this offense lacks direction and identity. There are no real difference-makers, and there is almost no explosiveness on this side of the ball. Going against a Central Florida offense that can put up points in bunches, the question arises as to how the Owls will hope to keep pace in this contest.

The logistics of this game provide another obstacle that the Owls didn’t need. Despite a break where they were able to go home and lick their wounds for close to two weeks, the Owls are back on the road yet again. They haven’t been on their own field since September 16. Contrarily, you have a Central Florida squad that is nice and dug in at home. By the time this game kicks off, the Knights will have been at home for just short of a month. So, in addition to the gap in overall talent and firepower, the Owls are also facing a tough home/away dynamic to boot.

While basing this season’s picks on last season is a faulty tactic, it might be equally simplistic to just ignore the enormous hammering the Knights put on the Owls last season on Temple’s field. The 49-7 beating was thorough and never in question. A lot of the Knights’ players who put up a lot of production last season will be back on the field this season. And there are also a lot of Owls players who likely remember how difficult that game was. And now it’s in Orlando with not a ton of things looking all that different heading into this one.

What the Knights Will Look to Do

Much of their offense goes through dual-threat quarterback John Rhys Plumlee. He is also the team’s leading rusher, but they get production on the ground from multiple sources, including Isaiah Bowser and Johnny Richardson. They have a few good receivers, which gives them good balance, but they’re perhaps not as aerially inclined as we saw last season. It’s still part of their game, but between the contributions on the ground from Plumlee and their backs, it’s more of a complimentary part of their offense.

That’s not necessarily good news for a Temple defense that has actually made some strides this season against all odds. With their offense leaving them out to dry more often than not, you’d figure this “D” would be duck soup, but they generally manage to avoid being destroyed. They are extremely rigid against the pass, with a secondary that is playing pretty well. In the past, that might have resonated better against a UCF bunch, but it’s questionable whether the Owls have the beef up front to adequately assuage the Knights’ ground attack. If the Knights are allowed to just have their way, this Temple defense could really be dusted come late in the game.

Lay the Big Number on the Home Favorite

When scoping the realm of total possibilities, there are enough scenarios where a more run-heavy Central Florida plays in a way that’s not geared toward covering a spread of this nature. If Temple can manage to put a couple of scores up there while keeping UCF’s offense one-dimensional and on the ground, it’s not hard to see them coming within this spread. I think there are a few more scenarios that shake out with the Knights really putting it on Temple in this spot. I see the Knights creating some second-half distance and getting out of this Thursday night special with the win and cover at home. I’ll take the Knights in this one.

Loot’s Pick to Cover the Point Spread: I’m betting on the Central Florida Knights minus 23 points. Bet your Week Seven college football predictions for FREE by scoring a 100% real cash bonus up to $300 when you use bonus code PREDICT100 at MyBookie Sportsbook!