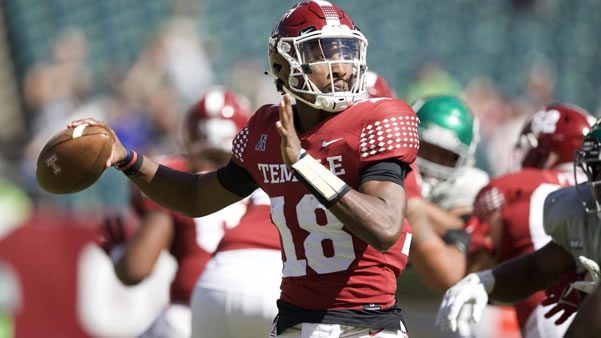 Point Spread: TEM +29/CIN -29 (Bovada - 50% signup bonus! Rebates on ALL wagers; win, lose or draw! FASTEST payouts online! They can get credit cards to work for deposits! What more could you possibly ask for! Signup today to start enjoying a better betting experience!)

The big question is whether Cincinnati is in a letdown spot or whether the Bearcats are ready to roll. The “prove” part of the schedule is over for the Bearcats, who have risen to fifth in the nation after winning at Notre Dame and Indiana and will now be favored in every game they play as long as they keep winning. Now they’ve entered American play, and they open with an opponent that’s actually been tougher on them than people might expect. It’s easy to forget now, given how these programs have gone in different directions, but Temple has actually had the better of this matchup, winning four of the past five meetings and covering in all of them.

But that was a different Temple team, as the Owls haven’t faced the Bearcats since 2019. COVID spared the Owls from a likely rout at Cincinnati’s hands last season, as Temple lost its final four conference games by at least 20 points last season. The Owls did bounce back slightly with a win over Memphis, but if the early goings are believed, there hasn’t been any reason other than history to suggest that Temple belongs on the same field as Cincinnati.

How the Public is Betting the Temple/Cincinnati Game

The public thinks the line has been pushed to the breaking point, as the tickets are starting to turn against Cincinnati. The money was enough to push Cincinnati up to -29 from -28, but 54 percent of tickets are in on the Owls, suggesting this line might claw its way back to -28.5 before kickoff. If you like the Bearcats, it might be a better idea to wait on them. The total can be bet whenever; it’s held firm at 54.

Temple can move it quickly or slowly, depending on what the situation called for. Both came into play in the win over Memphis, as the Owls turned a 17-play drive into points for their first touchdown, then came up with a few quick-strike plays in the second half to score 10 points in seven minutes, essentially slam the door on the Tigers’ comeback.
The Owls have a solid decision-maker in D’Wan Mathis, and they have shown no hesitation in putting the game in the redshirt freshman’s hands. Mathis has only tossed one interception against five touchdowns to this point in the season, and he’s not shy about spreading the ball to his receivers. Mathis was supposed to be the man in Georgia before transferring, and so far, he’s shown why the Bulldogs gave him a start in 2020 under center.

Where Temple struggles is with establishing the run. The Owls can run the ball and like to rely on their ground game near the end zone, as eight of their touchdowns have come on a running play. But they don’t really want to run the ball that much when the goal is to get yardage. Backup quarterback Justin Lynch will run, but when he’s not in the game, Edward Saydee is the main man on the ground for the Owls. Saydee averages an acceptable 3.8 yards per carry, but with only 43 attempts in five games, it’s clear the Owls aren’t going to be pounding the rock to win games.

If you’re thinking Desmond Ridder is salivating to see an AAC defense after taking on Indiana and Notre Dame, you might want to dial those expectations back a bit. Temple can actually defend the pass reasonably well, as the Owls give up just 147 yards a game through the air. Ridder is a quality quarterback, but the main reason he does well is that he does not force what isn’t there, and he won’t be taking unnecessary chances against the Temple secondary.

The man who’s salivating is Jerome Ford, as the Bearcats running back should be able to do almost anything he wants in this game. Temple has been getting gashed on the ground to the tune of nearly 170 yards per game, and if the Owls couldn’t stop some fairly pedestrian running games earlier in the year, they’ll be hard-pressed to stop Ford from doing whatever he wants. Cincinnati has been a throwing team more than a running team, but in this game, the Bearcats will likely take what the defense gives them.

Temple has actually never failed to cover in Nippert Stadium as a conference rival of Cincinnati, as the Owls have gone 5-0 ATS in five trips to Ohio’s southwestern corner. The road team has been a great bet in this series as a result, as the visitor is 8-2 ATS in their last ten meetings. Temple hasn’t been getting the job done as an underdog as of late, as it’s covered in just two of its past seven contests in October and two of seven as a dog.

Friday games usually fell favorites, but Cincinnati is used to this and has covered in five straight games on Friday nights. The Bearcats are also very comfortable against teams with winning records, covering in seven of their past ten games against teams above .500. Cincinnati tends to play under at home, as the total has failed to hit in 12 of its last 17 games at Nippert.

Things should clear up as the day goes on, which should leave a perfect night for football. Temperatures will be in the mid-60s, with the wind blowing at just five miles per hour.

I’m a bit worried that Cincinnati has a letdown here against Temple, but the Bearcats should be able to run all over this Temple defense. The Owls have shown no ability to stop the run, and I don’t think that they get the job done here either. It’s a large spread, but I’m taking the Bearcats. Bet your week 6 college football picks for FREE by taking advantage of a 100% REAL CASH bonus on your first deposit of $100 to $500 at GTBets!