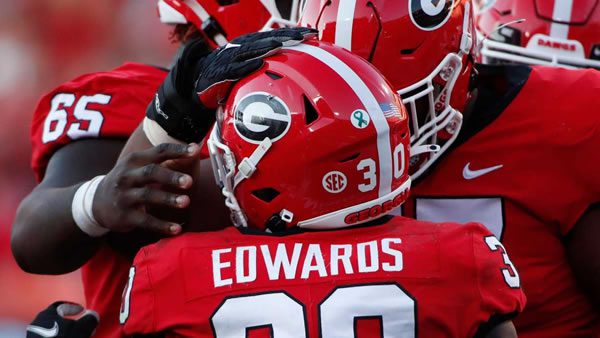 So it’s come to this for the SEC East title: can Tennessee and its offense stand up to Georgia and its fierce defense? This is the game that Tennessee has been waiting to play for years, as the Volunteers appear to finally have the personnel and coaching needed to go toe-to-toe with Georgia, which has basically run over the East for much of the past several seasons.

The Bulldogs have looked like beasts for most of the year despite losing a good chunk of their defense from a season ago. But nobody has stopped Tennessee’s offense all season, and the Volunteers basically demand that you score points to keep up with their abilities. That’s been more hit or miss for Georgia, as the Bulldogs have had good showings and bad ones with Stetson Bennett under center. On their best day, Georgia can easily score points and keep Tennessee from doing much with the football. But if the Dawgs play another languid half, the Volunteers are more than capable of coming up with another signature victory.

How the Public is Betting the Tennessee/Georgia Game

As far as the public is concerned, the Volunteers have already proven themselves. 75% of all tickets have come in on Tennessee, as the public thinks the spread is too high. The sharps disagree, as the money on Georgia has kept the line from moving. The total has also not changed.

The biggest question here is how will Georgia handle Tennessee’s passing attack? Hendon Hooker has emerged as one of the top quarterbacks in the nation because he takes advantage of what defenses have to give him against the Volunteers’ stable of wide receivers. Hooker has just one interception on the season against 21 touchdowns, and that’s because nobody has really been able to slow down Jalin Hyatt. Hyatt has hauled in 907 yards on the year, more than twice that of No. 2 teammate Bru McCoy. He also has 14 of Hooker’s 21 touchdowns, which speaks to just how effective he’s played this season.

But that said, he hasn’t faced a defense as powerful as Georgia. The Bulldogs excel at taking away the thing you do best and forcing you to go to Plan B, or even Plan C. Hooker is likely to see tight windows on Hyatt all night, which means that McCoy and Ramel Keyton have to step up and draw attention away from Hyatt. The Bulldogs will blanket Hyatt until it doesn’t work, so if Tennessee can either establish its ground tandem of Jaylen Wright and Jabari Small right away or find a solid No. 2 receiving option, it will be in control. If not, Georgia has the upper hand.

The Bulldogs’ offense doesn’t get anywhere near the respect it deserves because of a lack of consistency. When Stetson Bennett is at his best, Georgia’s got the ability to move the ball all over the field. The Bulldogs showed just how powerful they could be in rolling over Oregon in the opener, and for the most part, they’ve looked the part of a defending national champion. That said, the Bulldogs have been prone to languid halves where they let another team stymie them in a way that really shouldn’t work. Against Missouri, the Bulldogs needed a late comeback just to survive in a 26-22 victory.

If Bennett and the passing attack show up, Tennessee really doesn’t have much of a chance to slow them down. The Volunteers’ biggest Achilles’ heel is their terrible pass defense, which ranks 127th and all but forces the offense to keep piling up the big numbers in order to win. If Bennett and Brock Bowers get rolling, the over is an absolute certainty.

The over has been a sure thing for years for the Dawgs’ team total, as Georgia has put up at least 31 points in 10 straight meetings with Tennessee. The Volunteers, meanwhile, have found themselves stopped cold by Georgia’s ace defense. Only in 2020 did Tennessee manage to top 17 points against Georgia, as the Dawgs have controlled the offense ever since Kirby Smart took over in Athens.

The favorite and the over have been the way to go in this series for a while, and that’s almost entirely because of Georgia. The over is 8-2 in the teams’ past ten meetings, and the Dawgs are 5-1 ATS in their past six against the Volunteers.

The weather tends to favor Georgia in this situation. The Bulldogs will host on a warm, sticky day that could make traction a problem and make it difficult for the Volunteers to throw the ball properly. Temperatures will sit at 78 degrees with winds blowing at six miles per hour to the souheast.

The Bulldogs have the more complete team, even as Tennessee has attracted more attention. The Volunteers are a very good team, but they are not quite on Georgia’s level on defense, especially with the passing game. Georgia should be able to get ahead through the air and force Tennessee to play from behind and force the issue.

That should make the difference. Give me the Dawgs. Question: Are you happy with your bookie? There’s a good chance that our top tier sportsbooks offer a better experience than where you’re playing. We can’t believe some of the places our readers tell us they’re with! Gross! Check out a ton our top sportsbooks list to see why we only advertise the BEST!