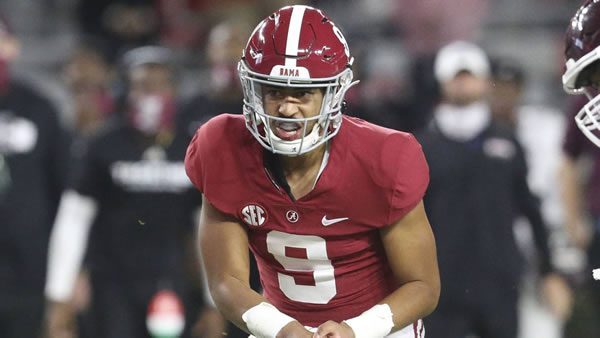 Point Spread: ALA -12.5/LSU +12.5 (Bet it for FREE by taking advantage of one of numerous sportsbook promo codes!)

Hard as it might be to believe, this is a win-or-else situation for Alabama. It’s obvious that the Crimson Tide have to run the table to make it to the college football playoff, but there’s more to it than that. The winner of this game is probably going to represent the West in the SEC championship game, especially if LSU ends up with a victory. The Tigers already beat Mississippi, so if they win here, they’d only need to beat Texas A&M or Arkansas to clinch the division title and get a shot at the Sugar Bowl and a slim chance at the playoff. LSU already carries two losses, so the Bayou Bengals have absolutely no margin for error if they want to make a New Year’s Six bowl. The playoff is unlikely for the Tigers because of the loss to Florida State, but if they have wins over Alabama and either Georgia or Tennessee, they have hope.

If Alabama loses here, there’s little chance that the Tide will be able to shoot higher than the Orange Bowl. A loss would leave the Tide behind not only Georgia and Tennessee but LSU as well, and at some point, the NY6 bowls will run out of slots. The job wouldn’t be over for the Tide by any means if they leave Baton Rouge with a victory, but they would be in pole position with Mississippi and Auburn left on the slate. This has been Alabama’s home away from home for several years under Nick Saban: the former LSU coach is 7-1 all-time against the Bayou Bengals in the state of Louisiana.

How the Public is Betting the Alabama/LSU Game

The public is divided on this matchup, as 50% of the public is on each team. The money has pushed the line half a point, dropping from -13 to -12.5 after initially looking like it would go in the other direction. The total has dropped half a point from 58 to 57.5.

How does Alabama want to attack a defense that has really struggled at times? The Tigers have done well against the lesser offenses of the SEC, but when they ran into Tennessee, LSU couldn’t hang around, even in Baton Rouge. The Volunteers ran all over LSU, and Alabama’s running game with Jahmyr Gibbs is even stronger than that of Tennessee.

To make matters worse for the Tigers, Alabama has an excellent passing game that doesn’t need to force the issue. Bryce Young remains one of the most hyped quarterbacks in the country for a reason, and the Tide have the ability to attack from anywhere on the field when they do need to pass. LSU has a solid pass defense, but the Bayou Bengals are going to have a devil of a time keeping Gibbs from chewing up a lot of yardage. If Alabama constantly has the ball, it’s difficult to see how LSU can get anything going.

With how dominant Alabama’s offense is, LSU has to make sure that it cashes in on all of its possessions. The Tigers don’t really have a great running game unless Jayden Daniels has the football, as virtually everything LSU does flows through him. The Tigers are at their best when they’re able to spread the football all over the field, as four different receivers have at least 20 catches, and tight end Mason Taylor has 19 grabs. Quietly, Jaray Jenkins has caught five touchdown passes on 20 receptions, and if Alabama doesn’t keep tabs on him and leading receiver Malik Nabers, the Tide will have a hard time keeping the Tigers’ offense from getting going.

Alabama’s biggest defensive weakness is its pass defense, so LSU likely isn’t going to spend a lot of time on the run. If Brian Kelly is smart, he’ll learn from Mississippi State and Mike Leach and at least try to mix things up. When Alabama knows what it’s getting from a passing attack, it can shut the opponent down. When the Tide have to keep guessing, they are vulnerable.

More Picks: Get Dan’s Clemson at Notre Dame analysis and pick for Week 10 >>>

The biggest trend here is that LSU just doesn’t score much against Alabama. Over the past 11 meetings, the Tide have gone 10-1 against the Tigers, and all ten victories saw LSU held to 17 points or less. Since Nick Saban took over in Tuscaloosa, he’s had 15 meetings with the Tigers, and 12 of them have seen LSU fail to score at least 20 points.
Conversely, Alabama almost always delivers on offense. The Tide have scored 20 or more in 10 of their last 11 meetings with LSU and usually have the game well controlled late. Even going to Baton Rouge hasn’t fazed them; the Tide scored 55 points the last time they were here and have won the past three matchups here by a combined 94-17.

Rain and thunderstorms make this a tough ask for LSU, as the rain likely means that it’s going to be difficult to sling the ball around. It’s going to be warm but wet, with temperatures hitting 67 degrees and a 65% chance of rain. Wind will blow at 5 miles per hour east-northeast.

The conditions really aren’t favorable to LSU. The Tigers might have had a shot in perfect weather, but in the rain, even the night lights of Tiger Stadium aren’t going to be enough to save them.

Nick Saban just doesn’t show his former employer any mercy. Give me the Tide. Hey! How much are you paying for odds when you bet on games? It’s more than likely -110, but some of these NEW online sportsbooks run by bean counters are socking bettors upwards of -120. Don’t put up with that garbage! Beet on games for cheaper at -105 at BetAnySports Sportsbook! You’ll be so glad you made the switch!