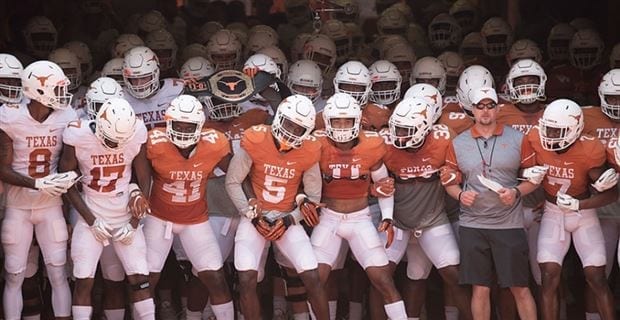 On Saturday, October 6th, 2018 the No. 20 Texas Longhorns and the No. 7 Oklahoma Sooners will treat us to the renewal of one college football’s longest-running and most-storied rivalries, the Red River Showdown. This one is a Big 12 conference collision played at a neutral site because these two teams harbor that much ill will toward each another. This one will take place at the Cotton Bowl in Dallas, Texas to wrap up the storied Texas State Fair. Before the candy apples get flowing, the Burnt Orange have a date with the Crimson and Cream and that contest will take place appropriately enough at High Noon. The affair will be broadcasted across the country on FOX. The rivalry series has been nothing short of a spectacle as the last four meetings have been settled by just one possession. In the last five meetings, the Longhorns have covered each and every time. In 2017, Oklahoma rallied back to edge out their arch rivals 29-24.

The Sooners Continue To Cruise

The defending Big 12 Champions enter off a 66-33 beating of Baylor, successfully covering a 21.5-point line in the process. The victory came on the road in Waco, Texas after the Sooners averted catastrophe at home in Norman, two weeks ago. Conjuring the shades of Iowa State in 2017, the visiting Army Black Knights forced overtime as a 30-point underdog, nearly knocking off the Sooners in what would have been yet another historic upset. Since losing in heartbreaking fashion last year in the Rose Bowl and seeing perhaps its greatest offensive player in school history graduate, the Sooners are undefeated owning wins over Iowa State, Florida Atlantic, and UCLA.

After losing a shocker to Maryland to kick off the 2018 season, the Texas Longhorns have appeared more and more like the team that many analysts touted as a potential contender for the Big 12 crown. Texas would respond with wins over Tulsa, a ranked USC, and then yet another big win against a TCU outfit ranked in the teens. After debuting with a ranking of their own last week, Texas was tested in Manhattan, Kansas by the always formidable Kansas State Wildcats. Affectionately known as “The Wabash Cannonballs”, Kansas State fought its way back into the game after trailing by 19 early. The Hook-Ems closed as an 8.5-point favorite at 5dimes but the Cats would only fall by 19-14.

A Key Match-Up To Focus On: Yes Texas’ Offense Against Oklahoma’s Defense

The big story line surrounding the teams is their respective strengths. For Oklahoma, that lies in their offense and their dual threat quarterback Kyler Murray. For Texas, the star of the show has always been their defense. However, due to some its talent leaving Austin, we have seen Texas’ defense seemingly return to Earth. This is not the key match-up that will decide the affair. If anything, it is how Texas’ offense fares against OU’s notoriously porous defense. On paper, Texas should be able to spring quarterback Sam Ehlinger against the Sooners’ 91st ranked passing defense (252.4 yards per game). The key is whether they can deploy their rushing game into the mix to play clock control. Oklahoma’s rushing defense has improved greatly in 2018 and has already shut down the likes of Army’s triple-option attack and FAU bull Devin Singletary. Texas’ running attack already has had its struggles and if they want to have a shot at getting the W, they will have to get their leading rusher Lil’Jordan Humphrey going early.

TIRED OF YOUR CREDIT CARD NOT WORKING AT SPORTSBOOKS? IT WILL AT Intertops + GET A 50% CASH BONUS!

The narratives we would expect to normally see in the build up to this collision have been rampant. The talk of the town is whether or not Texas can acclaim some of the New Year’s Six Bowl Projections some have prognosticated on their behalf in the pre-season. Many have said that this game will determine the course of the Big 12 race and Texas is likely the biggest threat to the reigning juggernaut of the conference. It’s important however that you don’t tell the Longhorns such things. After all, when the spotlights are on this team, it seems that they begin to itch their neck. Oklahoma is used to having a target on its back and will approach this game like any other. The emotional edge certainly lies with Oklahoma and even if this ones four quarters (which it likely will), the Sooners can still escape with a win and cover in what is likely an underlay for Texas’ stock being so high. Sooners minus the touchdown is the verdict, here.