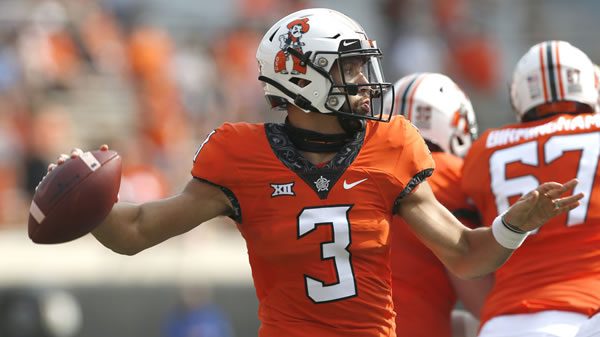 In their most recent game, the Longhorns defeated Iowa State by a score of 24-21. But, they
were unable to grab the ATS win, as their 3 was not enough to cover the spread. The team finished
the game by throwing for 3 touchdown passes. Overall, the Longhorns had 172 passing yards on a
completion percentage of 65.4%. In the rushing game, the Longhorns did not find the endzone,
while finishing with a total of 191 yards on the ground.

So far, quarterback Hudson Card has a passer rating of 110.46 while completing 74 of his 107
attempts. Currently, he has a total of 923 passing yards. Receiver Xavier Worthy heads into the
game, as the team’s leader in receiving yards, with a total of 432. The Longhorns have turned to
running back Bijan Robinson a total of 138 times for a total of 780 rushing yards.

The Cowboys come into the game with an overall record of 5-1. This strong play includes going
2-1 in Big 12 action. This season, the Cowboys have been favored in 3 games while posting an ATS
mark of 3-2-0. Their average over-under betting line is 51.5 leading to an over-under record of
4-1-0.

Oklahoma State is coming off a 3 point loss to TCU by a score of 43-40. The Cowboys entered
the game as 5.5 point home underdogs, making this an ATS loss. In the win, Oklahoma State
completed 44.4 of their 36 passes, 1 of which resulted in a touchdown. The team ended the game
with 3 rushing touchdowns, along with a total of 141 yards on the ground.

So far, quarterback Spencer Sanders has a passer rating of 99.22 while completing 120 of his
205 attempts. So far, the team’s most productive wide receiver is Braydon Johnson, who has caught
20 passes for a total of 398 yards. In the run game, Dominic Richardson has accumulated 427 on
108 attempts to lead the team.

Against the spread, the Longhorns have gone 6-4-0 over their last 10 games. Straight up, they
have a record of 6-4-0. Their last 10 over-under record comes in at 3-7-0. Texas has a positive
scoring differential in these games, averaging 35.8 points per game and allowing 23.3.

Across the Longhorns’ last 5 road games, the team averaged 27.4 points per game while allowing
25.8. Their record vs the spread in these contests was 1-4-0 while going 1-4-0 straight-up.

When looking at their past 5 home matchups, Oklahoma State has an ATS record of 2-3-0 while
averaging 42.4 per game. The team went 4-1-0 overall in these games.

Heading into the game, the Longhorns are ranked 26th in points per game. In this week’s
matchup, Texas has a matchup against an Oklahoma State defense that is giving up 27.83 points per
game. However, their unit has done a good job getting of the field on 3rd downs, allowing
opponents to convert at a rate of just 26.0%. This presents a problem for the Longhorns offense,
as they are one of worst performing team’s on 3rd down this season.

Although the Longhorns have turned to the passing attack at a below-average rate this season,
they have an opportunity to find success through the air vs an Oklahoma State defense allowing
teams to complete passes at a rate of 64.91%.

This season, the run game has not been a big part of the Texas offense, as they are averaging
just 36.14 attempts per game. With their limited opportunites, they have an average of 179.86
yards per contest, good for 42nd in the NCAA. This week, the Longhorns will be facing an Oklahoma
State defense ranked 82nd in rush yards allowed per game. This year, they have averaged 197.8
yards per game when facing defenses ranked outside the top 50.

So far, the Cowboys are averaging 45.33 points per game on offense, which is good for 4th most
in college football. However, they have a tough draw this week as Texas’ defense is allowing an
average of 18.29 points per game.

One aspect of the game that could benefit an Oklahoma State offense that struggles to generate
big plays in the passing attack is that they are facing off a Texas defense that has yet to
generate a lot of pressure on opposing quarterbacks. So far, the Longhorns are just 82nd in sacks
per game.

This season, the Oklahoma State offense has struggled in the run game, averaging just 155.67
yards per game on the ground. In terms of attempts, they rank 37th in the NCAA at 38.83 per
contest. This week, the Cowboys will be facing a Texas defense that is 40th in rush yards allowed
per game. So far, they have averaged 142.67 yards per game when facing top 25 rush defenses.

Heading into the game, the Cowboys will hope for some improved play from their defense, as
they are currently 75th at 27.83 points per game allowed.

Texas ATS. Bet your Week 8 college football predictions for FREE by scoring a 125% real cash bonus up to $400 AND get a FREE half point everytime you bet your favorite team at GTBets Sportsbook!