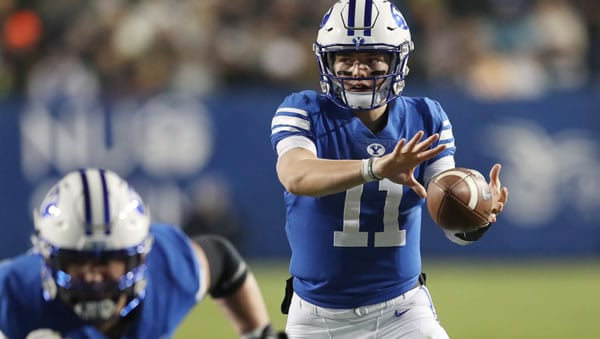 The Texas State Bobcats come into Provo to take on the BYU Cougars on Saturday. For BYU, it’s been a successful season thus far, starting at 5-0 and being pretty solid for bettors at 4-1 ATS. They were impressive on Friday, going into TDECU Stadium and coming from behind to beat Houston, 42-26. It was a massive game for third-year starter QB Zach Wilson, who threw for 400 yards. He looks for more of the same this week against a Texas State team that has had it pretty rough, losing three straight, including a 30-20 loss to South Alabama on Saturday. Can they give BYU any trouble on Saturday?

Challenges for The Bobcats

Frankly, they are numerous. This is a strange season on multiple levels. Texas State doesn’t get out near Provo very often, as this will be a strange setting, and it’s coming against a program that is a higher-level one, at root. And on top of that, it’s a good BYU team, probably the best that coach Kalani Sitake has had in his tenure. That’s a lot for a Sun Belt team to deal with. Particularly a program that has been in the FBS for under a decade and hasn’t surpassed three wins in a season in six years.

Another weird quirk of the season in a frenzy of rescheduled games is the fact the Bobcats now face their fifth straight road game, an unheard-of stretch of road-appearances in any form of football. They’re still covering at a 50% clip, though not in the last two weeks, as this schedule could be getting the better of a team that isn’t really built to absorb these types of obstacles. It’s like their level of resistance is crumbling with each passing week, and this is a spot where the wheels could theoretically come off.

Texas State has some upside on offense. They went with Brady McBride at quarterback last week, as he was splitting time with Tyler Vitt. Running backs Calvin Hill and Brock Sturges lead the run-attack, though they’ve been tinkering with the rotation to jump-start something. They ran for 260 yards last week but had trouble converting drives, though they moved the ball easily at times, with both their backs and their young and talented receiver package. This week, they go against a BYU defense that has given up an average of 14 points per game. They have been strong across all areas while also making many plays, especially against the lower-end offense they have been playing. It also doesn’t look good when BYU beat Troy by 41, who beat Texas State by 20, while also beating a UTSA team that also beat the Bobcats.

A Scary Proposition for Texas State

While their defense is able to be vaguely competitive in a Sun Belt setting, the Bobcats could find themselves out of their depth with a BYU offense that isn’t prone to letting their foot off the gas. Wilson has really grown into his role this season, taking a big step forward. He has 12 TD throws against just one pick, having also run in 6 TDs. RB Tyler Allgeier has become a force in the running back, as the converted linebacker also is also a threat aerially. We see receivers stepping up every week, mainly Dax Milne, who had 184 yards and three TDs on Friday.

When you start to add it up, it gets a little dire for the Bobcats. They have to bank on some kind of letdown from BYU, who could conceivably not be at a fever-pitch for this matchup. But they don’t seem to be the kind of team that is arrogant enough to phone it in, as this is their first taste of real success in a while. They look like a team trying to make a point, even if their opponent isn’t all that threatening. In their one non-cover, however, it was a similar spot, as they beat UTSA only by seven as 34-point favorites. So it wouldn’t be the first time they underperformed this season with a beatable Sun Belt team coming into town.

Other than that, it looks fairly grim. The never-ending run of road games is enough adversity for this Bobcats team without also having to go to a foreign region to play a team that is 5-0. And not that the common-opponent-arithmetic always works, but when it’s as drastic as BYU smashing teams that beat Texas State by three scores, it’s only fair to ask how formidable the Bobcats can truly be in this spot. Having not eclipsed 21 points of scoring in their last three games and now even more road-weary and against a better defense, what’s the prognosis?

I wouldn’t put it past Texas State to put up a couple of scores against a BYU team that isn’t in peak mental form, making it an uphill battle for the Cougars to score enough points to cover the jumbo point-spread. BYU has been in pretty soft through five games, with the west coast conferences where they’d typically play more formidable teams not yet having started their season. And this situation is a byproduct of that. Otherwise, Texas State would have found better spots because to be playing in your fifth straight road game at a team that’s outside your reasonable range is just too much. And maybe it’s too obvious or “square,” but I struggle to find a positive winning case for the Bobcats this week. I’ll lay the number on the Cougars.

Loot’s Pick to Cover the Point Spread: I’m betting on the BYU Cougars minus 29 points Bet your Week 8 college and Week 7 NFL picks FREE by taking advantage of a huge 100% real cash bonus on your first deposit of $100 all the way up to $1000 at Betnow Sportsbook!.