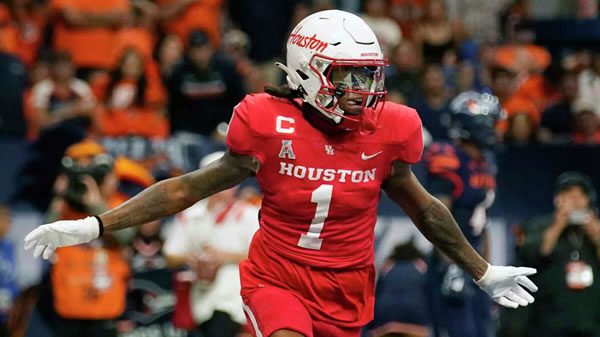 Tulane’s win at Kansas State two weeks ago looks even more like an outlier now, as the Green Wave followed by losing to Southern Mississippi while Kansas State was taking down Oklahoma. The Wave might have been in for a letdown after getting such a big win in Manhattan, but they should have their minds firmly on Houston now.
But will that be enough after back-to-back 18-point defeats against the Cougars? Houston has dominated this series for years, winning three straight meetings in Texas by double digits and never playing out a single close win. Out of the past 17 matchups, the only games that weren’t decided by double digits were 2014, 2017, and 2019: the three games that Tulane won. The last time the teams met in Houston, the Cougars couldn’t hold on to the football at all, losing five turnovers. But Houston still dominated the game in a 40-22 win because the only time Tulane’s offense did anything was when the Cougars set them up with short fields. The Wave has improved on offense since that point, but is it enough to play with a team as explosive as Houston?

How the Public is Betting the Tulane/Houston Game

The public thinks the answer is no, but enough money is coming in on Tulane to balance that out. Even though 67 percent of tickets have come in on the Cougars, it hasn’t been enough to move the needle off -2.5. The total has ticked down slightly from 55 to 54.5.

Houston:
Running back Brandon Campbell (ankle) is questionable. Running back Alton McCaskill (knee) is out.

Tulane’s going to look back on the game with Southern Mississippi and wonder how in the world it managed to lose that one. The answer is an ill-timed pick-six on the part of Michael Pratt, who has mostly been effective with the football but made a mistake at the worst possible time. And that’s the oddity of Tulane football: this is still a young offense that has a lot of talent but also makes a fair amount of mistakes.

When the ground game is effective, Tulane can eat up a lot of clock in a hurry, as the Wave ran 47 times against Southern Miss last time out. But in that loss to the Golden Eagles, the passing game really took the day off, as Pratt reverted to his bad personality and didn’t really do much of anything on the attack.

Against Houston, it’s a question as to what’s going to be the most effective against a defense that has proven rather poor against any opponent it faces. Teams are averaging almost 300 yards per game against the Cougars, and Kansas, in particular, took it right down Houston’s throat on the ground by going for 280 yards. In this situation, Tulane is likely to try to follow Kansas’ plan for as long as it works and let Tyjae Spears try to do damage on the ground. Pratt has been inconsistent against the Cougars, so if the ground game works, that’s likely Tulane’s first plan of attack.

Clayton Tune has dominated this matchup for two years, but Nathaniel Dell has gone MIA in the past two meetings. That could work out, either way, this time around, as Dell is clearly Tune’s preferred option this season and should be a large part of the passing attack. Tune did throw three interceptions against Tulane two years ago, but Houston has been so explosive against the Green Wave through the air that the turnovers haven’t really mattered in past seasons.

But with Tulane’s attack getting better and the Houston defense a real train wreck, this might be a situation where Tune has to take better care of the football. Tulane isn’t giving up much on defense, and there’s no guarantee that Houston is going to be able to move the ball as effectively this year with the improvements Tulane has made on defense. Houston’s going to have to run the ball effectively and take care of the football this time around.

Fading Tulane here has been almost automatic over the years, as Houston has covered 14 of the past 18 meetings and has won 15 times by double digits in that stretch. Tulane has covered in five of its past six games and has never had a better chance to take down Houston on the road given the play of the defense, but they’re also playing the Cougars on a Friday, and Houston handles the weeknight games better than almost anyone. The Cougars are 12-4 ATS in their last 16 Friday games, and they should be ready for a stronger performance after looking shaky against Rice.

With Houston’s defense, points are an expectation, which means something has to give. The Cougars have played to the over in four straight games and five straight in September, but the Wave have gone under in seven of their past nine games overall.

A night game means a cool night in Houston to close out September. Temperatures will drop to 61 degrees in southeastern Texas, with winds blowing north-northeast at six miles per hour.

Tulane is a tough nut to crack after the last two weeks, but Houston really isn’t stopping anyone at the moment. The Cougars have played a tough slate through the first three weeks, but Rice really isn’t all that great of an opponent and still managed to hang around with Houston pretty well because the defense doesn’t stop anybody.

As long as Pratt can avoid the big mistake, this game is there for the Wave to take. I’ll take Tulane and the points. Bet your Week 5 college football predictions for FREE by taking advantage of a 100% REAL CASH bonus on your first deposit up to $300 when you use bonus promo code PREDICT100 at MyBookie Sportsbook!