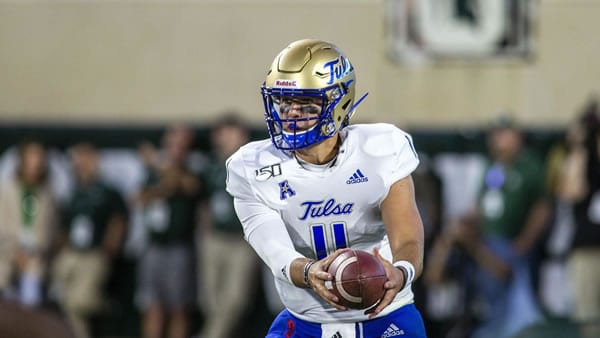 For the first time in this weird season, Tulsa won’t play a team that’s ranked No. 11 in the nation. It’s hard to play a tougher schedule than the Golden Hurricane has without being in the SEC, as Tulsa has opened with Oklahoma State and Central Florida, both of which were on the road. To make matters worse, Tulsa hasn’t played in three weeks since that win over the Golden Knights, as they’ve lost games against Arkansas State and Cincinnati to COVID. Once again, Tulsa’s on the road, as they’re now on the other side of Interstate 4 to take on South Florida.

The Bulls have been playing but probably wish that they weren’t. South Florida has really struggled to get anything going this season, having been ripped by Notre Dame and Cincinnati and failing to challenge East Carolina at home. The Bulls finally put a solid three quarters together at Temple, but they faded down the stretch, failing to hold an 11-point lead and allowing the Owls to swing the game around. After coming so close and falling short, does South Florida still have the motivation to get up off the canvas and challenge a good Tulsa team that’s played and beaten much more formidable opponents than the Bulls? Or does USF look at a remaining schedule that includes Houston, Memphis, and UCF and lose hope?

How the Public is Betting the Tulsa/South Florida Game

Tulsa:
Linebacker Yohance Burnett and running back Shamari Brooks are both out for the year with knee injuries.

Losing a quality running back in Brooks hurt, but Tulsa was able to survive because Deneric Prince has proven to be a solid replacement. Prince isn’t the kind of back who can break the big one, as he’s only managed to top 20 yards a couple of times this season, but he will gain about five yards per carry and keep the offense moving. With four offensive line starters back from a season ago, running the ball is not a concern for the Golden Hurricane.

That’s a big plus, because in this game, running the ball might be the way that they win. For all of their struggles, USF has actually been somewhat effective against the pass, holding opponents to just 173 yards per game through the air. That could be because the Bulls have been so inept that the game is out of hand, and teams don’t have to bother with the pass, but USF has also allowed over 200 yards per game on the ground, which says that teams aren’t just running in the fourth quarter against the Bulls. The holes could be wide open for Prince and TK Wilkerson to run all day long in this game.

If the Golden Hurricane do attack through the air, they’ve got an experienced signal-caller in Zach Smith and reliable pass-catchers in Keylon Stokes and Josh Johnson. But Smith is also an intelligent quarterback who is likely to take what the defense is willing to give. If USF extends the invitation for Tulsa to run the ball against them, the Golden Hurricane will likely accept it.

When South Florida Has the Ball

On the plus side for South Florida, the Bulls can run the ball pretty well and have two backs who can pick up a lot of yards on the ground. Johnny Ford and Kelley Joyner each average more than 4.5 yards per carry and, have combined for 470 yards in five games. But the Bulls’ big problem is in the passing game, where they’ve managed just four touchdowns against five interceptions.

Part of that is because of bad luck, as USF lost Katravis Marsh against Cincinnati and had to move up the timetable for sophomore signal-caller Jordan McCloud. But McCloud probably should have been playing anyway, as he has all four passing touchdowns and just two of the five picks. The main thing he has to do is find a connection with a receiver and consistently attack opposing secondaries. USF has six receivers with at least nine catches this season, which both makes them hard to prepare for and makes it hard for them to establish much in the way of consistency. South Florida is getting yards, but they aren’t getting points, as they only managed 31 points in their first three games against FBS competition. Considering Tulsa held Oklahoma State to just 16 points, that’s problematic.

Tulsa has never beaten South Florida, with all three games going in the Bulls’ favor. All three games have also been close, as the teams have never played a game that was decided by more than one possession. Last year’s game was as close as it gets, as South Florida escaped with a 25-24 win over the Golden Hurricane.

When Tulsa goes on the road, points tend to be at a premium, and that might be even more true with this year’s Tulsa defense. Any team that can hold Oklahoma State and Central Florida to a combined 42 points know what it’s doing, and there’s a reason that Tulsa has seen the under hit in 12 of its past 17 on the road. The under also tends to hit for USF conference games, as five of the Bulls’ past seven in the American have gone under the number.

It’s October in Tampa, which means warm, cloudy evenings are the norm. This will be another of the kind, with temperatures pushing 89 degrees.

To me, this is the kind of game that’s going to hang around the number all night long. The Golden Hurricane have the defense needed to shut down the Bulls and cruise to a win, but the big questions are whether Tulsa is ready to get back to game speed after three weeks off and whether the Golden Hurricane will run the ball as much as they need to in order to best the Bulls.

I think they’ll do what they need to do and get the cover. I’ll lay the points with Tulsa and count on the Golden Hurricane defense. Speaking of laying… Do you lay -110 odds at your book? If so, you SERIOUSLY need to consider making the switch to reduced juice -105 wagering! Betting on games at -105 odds instead of -110 will save you oodles of cash over the long term. Start betting smarter today at BetAnySports, home of -105 odds on sides and totals!

The new go-to for -105 odds is Betanysports!