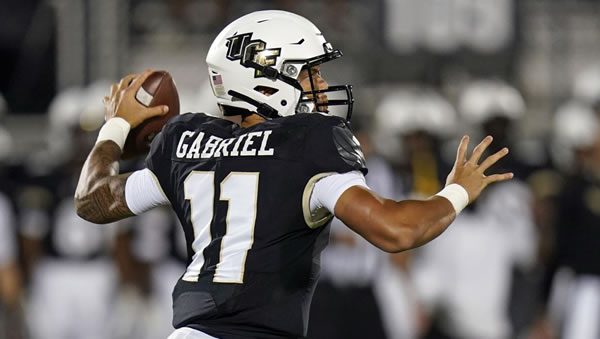 Central Florida’s annual game against a Power 5 school takes place, and once again, the Knights are expected to come out on top after beating Boise State and rolling through Bethune-Cookman in their first two contests. So far, the Knights have looked strong on offense, but the thing that has to scare their opponents is that they’ve actually played some real defense in the first two weeks. After giving up 24 points in their first two-quarters of action, they’ve given up just 21 points in the previous six quarters, with only seven of those coming against Boise State.

On the other hand, Louisville got to 1-1 on the strength of two completely different showings from its defense. The Cardinals had no answers for Mississippi’s potent attack but completely shut down Eastern Kentucky, holding the Colonels to just three points in their win last week. Central Florida is a lot closer to Mississippi than Eastern Kentucky, however, and the Cardinals are facing a challenging task in trying to slow down a squad that rarely finds itself held to fewer than 30 points.

How the Public is Betting the Central Florida/Louisville Game

The public remains biased toward Power 5 schools whenever they play Group of 5 schools, even though UCF is now on its way to the Big 12 and has been the better team over the past few seasons. The public has 57% of tickets on the Cardinals, and the line has dropped from -7.5 to -7 for UCF. The total has increased, jumping from 69.5 to 70.

Central Florida:
Running back R.J. Harvey (knee) is out for the season. Wide receiver Dionte Marks (leg) is questionable.

The main thing that you have to keep in mind with the Knights is that they are never out of the game. Dillon Gabriel has already thrown for six touchdowns in this young season, and the Central Florida offense piled up the yards against Boise State, outgaining the Broncos 573-283. Unlike a lot of teams, the Knights have their primary weapon on the ground in Isaiah Bowser, who tore through the Boise defense and averaged 5.2 yards per carry on 33 touches in the win. For the game, Central Florida managed to get off 73 plays, a large reason why they were able to swing the momentum away from the Broncos.

The problem that almost cost the Knights that game was a pair of poor decisions from Gabriel that Boise State turned into touchdowns. When you give up a touchdown on offense and set up a second, you’re really making life harder than it needs to be. UCF has gotten away with it so far, but against better defenses, these mistakes can really add up. Louisville doesn’t appear capable of taking advantage of that, however, and if the Cardinals can’t get the Knights off the field, this could get ugly.

Everything Louisville has done flows through Malik Cunningham, and that comes with its positives and negatives. On the good side of the ledger, Cunningham has been able to create plays with his feet as well as his arm, rushing for 79 yards and two scores against Mississippi in the Week 1 loss to the Rebels. However, the rest of the offense hasn’t really gotten going for the Cardinals, as nobody else had more than 49 yards in the contest against Mississippi.

That could be a problem against a UCF defense that has been lights-out on the ground so far. Against Boise State, the Knights held the Broncos to just 20 yards on 26 carries, and Bethune-Cookman managed just 24 rushing yards on 14 carries. If Cunningham isn’t able to spread the ball around to the Cardinals’ receivers, the Knights could control the game in the trenches.

You would think that an offense as fast as UCF’s would be right at home on FieldTurf, but the Knights have actually really struggled on the artificial surface, failing to cover in their past seven games on the turf. The Knights are 0-6-1 ATS on artificial surfaces and haven’t gotten the job done much on the road as a part of that, going just 1-4 ATS in their past five road contests. On the other hand, the over has been a consistent cover for UCF; it’s hit in seven straight September UCF games.

Louisville hasn’t exactly done the job against American foes, as it’s just 1-5 ATS in its past six games against American opponents. Nor have the Cardinals seen much success when they’ve been getting points: they’ve only covered eight of their past 29 games when they’ve been an underdog. Louisville has treated its fans to a lot of points, as the over has cashed in seven of the Cardinals’ past nine home games.

Here’s one thing that could slow down the offenses: the weather. It’s supposed to be in the low to mid-80s and humid on Friday, with thunderstorms and up to a third of an inch of rain coming. Wind won’t play much of a factor, blowing at just five miles per hour, but with the rain likely to fall, this will be a new challenge for both teams.

Louisville’s offense tends to get the job done on the ground, and so far, UCF has proven almost impossible to penetrate in the trenches. That could be because Boise State can’t move the football on the ground, as the Broncos couldn’t get going against UTEP either, but for the time being, UCF’s run defense looks like it’s legitimate.

If that’s the case, Louisville is going to have a devil of a time keeping the ball moving in this one. I’ll take the Knights. Did you know that you could be saving $5 every time you bet to win $100. Not a $100 bettor? It’s still the same principle over time. An $11 bettor saves fifty cents when they bet to win $10. The bottom line is that you’re saving 5% on the vigorish the bookie charges you and this adds up to a MASSIVE amount over time! Find out more about betting on games at reduced odds and where you can do this! It’s 5 minutes that’ll save you hundreds (if not thousands) of dollars!