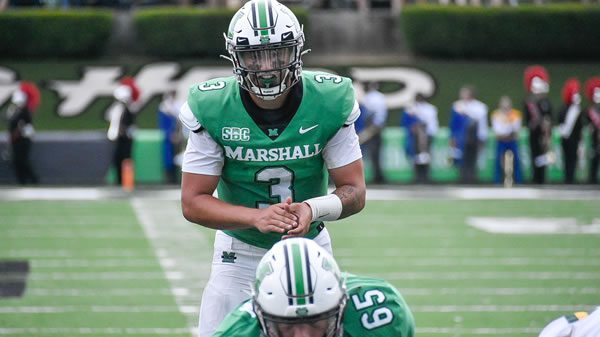 Louisiana has been one of the gold standards in the Sun Belt over the past few seasons, but things appear to be changing this year after the Cajuns managed to lose their first two games of the Sun Belt season. With South Alabama and Troy looking like the top teams in the West Division, Louisiana is going to have a hard time simply making a bowl game this season, let alone making a run at the conference title.

Marshall is new to the Sun Belt this season after coming in with James Madison, Old Dominion, and Southern Mississippi, but the Thundering Herd’s switch hasn’t really worked out for them yet. Marshall has an impressive win over Notre Dame under its belt in the second week, but since then, the Herd has kind of fallen off in a big way. They followed up the win over the Irish with a stunning loss at Bowling Green, then couldn’t get anything going in their Sun Belt debut against Troy. Incredibly, because the Herd scheduled two FCS opponents, the only FBS team they’ve beaten all year is Notre Dame. They’ve looked the better side this season, but are the Cajuns going to go down without a fight after being a top-tier squad for the past several years?

How the Public is Betting the Louisiana/Marshall Game

Louisiana:
Running back Kendrell Williams (undisclosed) is out.

Marshall:
Running back Rasheen Ali (undisclosed) is out.

There’s a saying that if you have two starting quarterbacks, you really have none, and Louisiana has really proved that over the past three games. The Cajuns said that they decided the quarterback battle in training camp, but then they’ve gone the exact opposite route and rotated both Chandler Fields and Ben Wooldridge in the same game and on a different week.
Last week, Wooldridge was the man doing most of the quarterbacking against South Alabama and did an adequate job moving the football, but three critical turnovers wrecked any chance the Cajuns had of getting the win at home. Truthfully, the best part of Louisiana’s offense last week was the running of Chris Smith, but that isn’t likely to work in this game. For one thing, Louisiana has really struggled to run the ball, ranking 105th in rushing offense even with Smith averaging above five yards per carry. The Cajuns simply don’t give him enough opportunities to get into a flow and take over a game. For another, Marshall’s biggest strength is its dominant run defense. The Thundering Herd only allow 71 yards per game on the ground, which ranks third in the nation. The way to attack Marshall is through the air, but Louisiana’s going to have to decide on a quarterback in order to do that.

When Marshall Has the Ball

This is an old-school offense that moves the ball on the ground well and passes when it has to. Khalan Laborn has more rushing attempts than Henry Colombi has passing attempts, and that’s how Marshall operates best. Laborn averages 5.5 yards per carry, has the speed to produce big runs, and has eight touchdowns on the season.
But teams are starting to realize that they can beat Marshall by letting Laborn get his yards and focusing on taking away the pass. Against Troy, Laborn rushed for 118 yards and a score, but he needed 30 carries to do it, and Colombi only managed to throw for 49 yards for the game. That allowed Troy to overcome three turnovers and emerge with a 16-7 win, which speaks to just how weak the Marshall passing attack is. Even against Notre Dame, the Herd’s path to victory was through Laborn and an opportunistic defense, not by trying to attack through the air. Laborn will get his yards; the question is whether Louisiana can get Marshall’s offense off the field by forcing the occasional third-down incompletion when the Herd needs a conversion.

By a stroke of luck, these teams have a slight familiarity with each other because of meeting in last year’s New Orleans Bowl. That’s the only meeting that these teams have ever had against each other, so there are no trends to glean from their head-to-head pasts here. Instead, it’s wise to look at Louisiana’s tendency to play to the level of its competition, as the Cajuns have covered in seven straight games when facing a team with a winning record.
On the other side of the ledger, Marshall has gone just 8-25 ATS in its last 33 home games and really hasn’t handled being the favorite very well. When they’ve faced a team with a losing record, they’ve gone just 3-7 ATS over their past ten such instances. The under has also got a long history: it’s cashed in seven straight when Louisiana was coming off a loss, and it’s gone 6-1 in Marshall’s past seven games in Huntington.

Want another reason to take the Under? Here it is: the weather for this game is going to suck for both of these teams, as temperatures are going to drop to 60 degrees at kickoff, and there’s a 95% chance of rain in the forecast. By the end of the evening, up to 2/3 of an inch of rain could fall in Huntington, and with wind gusts of up to 20 miles per hour and sustained winds of seven miles per hour to the south-southwest, kicking will likely be an adventure.

Louisiana is a team that rubber-bands to its competition, and I don’t think Marshall has the kind of offense needed to put up big numbers against the Cajuns. This reads like a close win for the Herd at home, not a blowout of double-digit proportions.

Louisiana might not stop the Marshall ground game, but it should slow it down long enough to keep the game respectable. I think both the under and Louisiana +10.5 represent strong plays here.