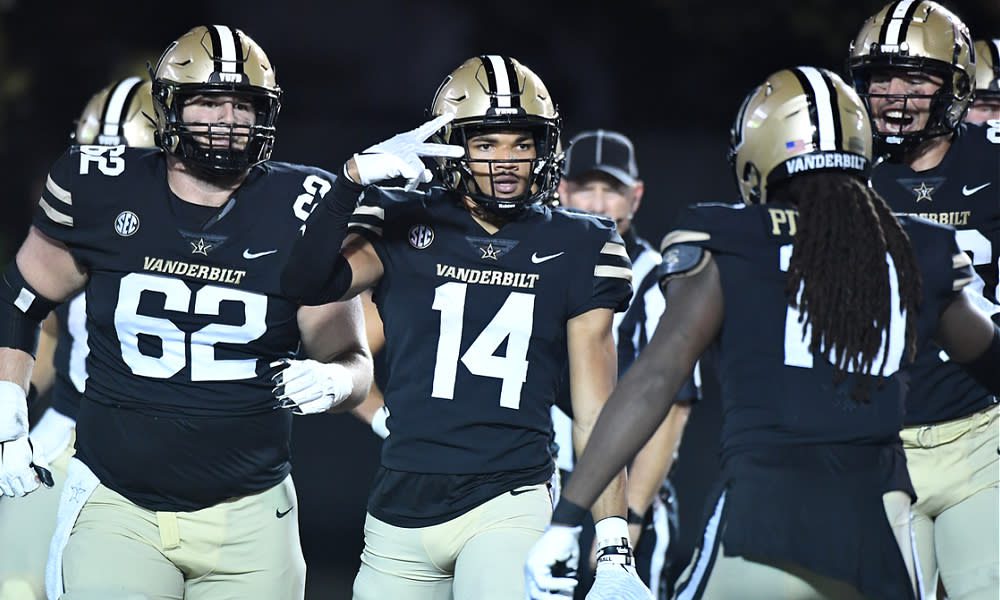 Timmy Chang is back on the sidelines in Honolulu, but he doesn’t have a lot of returning pieces with him as he starts his head coaching career at the school where he once put up dizzying numbers. Twenty years ago, Chang was averaging more than 4,000 yards a year, but Hawaii’s going to have to work to find the next Chang in a group that includes just six returning starts on both sides of the ball.

It’s been a rough few years at Vanderbilt, which has gone just 5-28 in its past three seasons and dropped 21 consecutive SEC games since beating Missouri in 2019. Worst than that is the fact that Vanderbilt opened last year against FCS East Tennessee State and got drilled by 20 points at home. The Commodores should be a little bit better this time around, as they’ve got some experience this time around and should be better off than they were last season. But they’ve got to get that defense fixed after giving up at least 31 points in seven of their eight SEC games. Even though the Commodores’ slate included weak teams like Connecticut and Stanford last year, a 21-20 loss to South Carolina was the only one of their final 10 games where they held an opponent under 28 points.

How the Public is Betting the Vanderbilt/Hawaii Game

Even though it’s SEC vs. Mountain West, the public isn’t buying the idea of Vandy giving a touchdown to anybody. The line has dipped from -7 to -6.5, and the total has ticked up a half-point from 55 to 55.5.

The Commodores report no injuries.

The Warriors report no injuries.

When Vanderbilt Has the Ball

Vanderbilt coach Clark Lea used SEC media day to announce that Mike Wright is his starter at quarterback based on how productive he was over the final three games of the season. The passing offense wasn’t great with either Wright or Ken Seals last year, but Wright managed to top 200 yards against both Mississippi and Tennessee in the final two games of the season and adds a running element that Seals doesn’t bring to the table.

The key will be whether Wright can actually attack the Warriors’ inexperienced secondary, as Hawaii brings back none of its defensive backs from a season ago. Vanderbilt doesn’t have much back in the way of receivers, but the Commodores do have Will Sheppard returning and should be able to get something going as long as the ground game can produce something. Too often last year, Vanderbilt was entirely dependent on whether the running game did anything; the Commodores averaged 35 carries a game last season and will have to get a better average than 3.5 yards per carry to get anything going.

If this looks like the offense Chang ran 20 years ago, look for Hawaii to take to the skies with its limited experience. Cammon Cooper made the move from Washington State to take over the offense here, but he’s seriously lacking in experience with just 23 college passes to his name. The good news is that three of the four starters who return from last season are on the offensive line, so Cooper should have plenty of time to make decisions.

There’s more good news to be had: Vanderbilt has given up at least five yards per carry for five straight years and only returns two of its four starters in the secondary, so the Warriors should have plenty of opportunities to attack this defense. Whether their own defense can hold up is another question entirely, but there’s reason to think that the Warriors can at least score.

Vanderbilt has actually been a solid bet once the Commodores get out of Nashville. Vandy has covered in eight of its past 10 games on the road, in large part because they usually face ridiculously high spreads in the SEC. That’s not going to work this time, because Vanderbilt is favored against an opponent that isn’t East Tennessee State for the first time since facing UNLV in 2019. And that wasn’t exactly a moment the Commodores want to remember; they gave 15.5 points to the Rebels and lost the game by 24. Vandy is just 1-3 ATS as a favorite over the past three seasons and lost the game outright on two occasions.

When Hawaii plays an August game, it’s been effective, covering in six of its past seven games played in Week 0. The Warriors also have a tough home stadium in the tiny Ching Athletics Complex, as only 9,000 people can fit in the building while they’re rebuilding their traditional stadium. Hawaii went 4-2 SU and 3-2-1 ATS in Honolulu last year, including two outright upsets of Fresno State and Colorado State.

People usually don’t associate Hawaii and Honolulu with rough conditions, but this might be tough on the kickers. Winds are set to blow at 14 miles per hour to the east-northeast, with winds getting as strong as 23 miles per hour gusts. Temperatures won’t be a problem here; the temperature will sit around 73 degrees at kickoff.

I’m not sold on Vanderbilt’s experience here. I think Hawaii’s going to be able to put up a fair amount of points and I really don’t trust the Commodores to cross three time zones and the Pacific and still come up with a solid performance on the road.

I lean toward the over in this situation, as I don’t think either side is going to be able to stop the other. As for the overall result, I might buy a point to get this to a football number, but I’m taking Hawaii and the points at home. Kick your college football season off right with a big win before you even place your first bet! Get a 100% real cash bonus on your first deposit of $75 to $500 when you use bonus promo code PREDICTEM at Betnow Sportsbook!