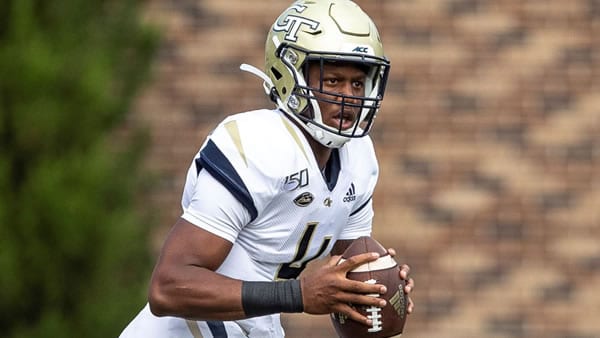 Point Spread: UVA +3/GT -3 (GTBETS – Get a FREE half point everytime you bet your favorite team!)

The Georgia Tech Yellow Jackets will welcome a nationally televised audience into Bobby Dodd Stadium on Thursday when they host the Virginia Cavaliers. This season has been a roller coaster of emotions for Georgia Tech. Just three weeks ago, Georgia Tech fired Head Coach Geoff Collins following a 1-3 SU start. Since then, interim Head Coach Brent Key has gone 2-0 as the man in charge with following back-to-back wins over no. 24 Pittsburgh and, most recently, a narrow 23-20 overtime victory over the Duke Blue Devils.

The Yellow Jackets upset, as 21-point underdogs, against Pittsburgh appears to have been a turning point for a program in shambles just a week prior. Now the Yellow Jackets are 2-1 SU in conference play and in an unexpected position near the top of the ACC Coastal Division. While we should not expect Georgia Tech to seriously challenge for the division crown, Interim Head Coach Brent Key could be auditioning for his next coaching role, especially if the Yellow Jackets can get past the Cavaliers this Thursday as mere 3-point favorites.

The visiting Cavaliers have lost four of their last five games this season going into this Thursday’s contest with Georgia Tech. Most recently, Virginia dropped a 34-17 defeat to Louisville despite the fact the Cardinals were with a backup QB in Brock Doman. New Head Coach Tony Elliott inherited a Cavaliers program that was in shambles and has hardly had any time to gain any ground with the program. To complicate matters, Virginia has been beat up with injuries on both sides of the ball in recent weeks, and like the position Georgia Tech was in just two weeks ago, the Cavaliers are in a position where they desperately need a victory to get things turned around.

From a match-up standpoint, Georgia Tech has been pretty solid on the ground this season, and if they get the running game going, it tends to open up the rest of the offense. The problem is that QB Jeff Sims has struggled with accuracy issues and has been sacked 18 times on the season. While the Georgia Tech offense is not pretty, they are pretty relentless with the ground attack, and Virginia’s defense has been hit pretty hard with injuries. Starting LB Nick Jackson is battling a knee injury, and WILL LB in Josh Ahern has already been ruled out with an injury. Therefore, Virginia has some concerns in the middle of their defense going into Thursday’s primetime showdown.

For the Cavaliers’ offense, I would start with the fact that QB Brennan Armstrong has also been very inconsistent this season, with a 55% completion rate totaling five touchdowns and seven picks on the season. With that being said, I would also state the Cavaliers have slightly better talent at the skill positions with WR Keytaon Thompson and RB Perris Jones. Furthermore, the offense will get WR Billy Kemp back this week, who has missed several games on the season. The talent at the skill position provides Virginia some paths to compete as the road underdogs this week, but that is still likely dependent on the play of the defense as well.

Jay”s Pick: Take Georgia Tech -3. Bankroll running low? Fix that issue and give it a fat boost by grabbing a 100% bonus at one of the many top tier sportsbooks on our best bookies list!