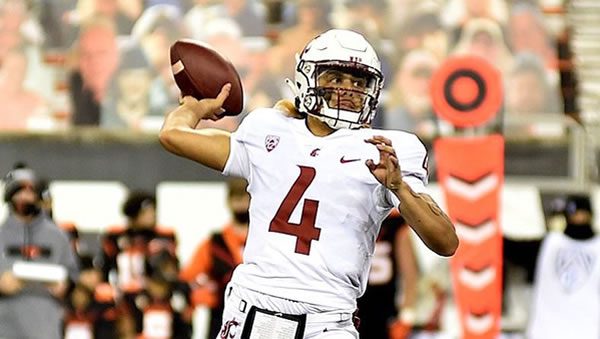 The Washington State Cougars come to Eugene for a big Pac-12 showdown with the Oregon Ducks on Saturday. In the Pac-12 North, the Cougars are the only ones who can threaten the supremacy of the 8-1 Ducks, a team that could have some big things of the table if they win out. But the Cougars have gotten their act together in conference play, while overcoming adversity to be in a pretty good spot. Will Oregon keep it rolling or will the Cougars upset the applecart?

Who is in a Better Spot?

Perhaps having last week off served and helped settle a Washington State team that has been through a lot with the untimely loss of their head coach. They were still able to beat a pretty good ASU team before the extra week off, a needed development following a loss to BYU. After a rough start to conference play, the Cougars got on the right track and rattled off some wins. They enter this having won their last four conference games. And with three of those coming on the road, they’re not a team to overlook in this spot.

On Saturday, Oregon went into Washington and scored the 26-16 win, their fourth in a row since the inexplicable loss to Stanford. A big day on the ground was responsible with Travis Dye going for 211 yards. QB Anthony Brown is also a threat with his legs, though his aerial performances can sometimes be subdued. But finally finding answers on the ground after losing CJ Verdell for the season is big and it’s definitely something they should be able to wield against the dicey Washington State run-stop.

Granted, the Ducks are in a better spot overall, the only team in this game who has a chance at making a national splash. But in the sense of betting on teams and winning money, they shouldn’t be regarded as a superior choice this season to the Cougars, a team that has covered six of nine spreads. After covering one of their first six spreads, the Ducks have covered two of three, but being 3-6 ATS shows a team in a lot of close games and not often laying it on thick against seemingly-outmanned opposition.

Daylight for the Cougars

This wouldn’t be the first time Washington State spoiled things for a favored Oregon team. Last season, it didn’t really play out, with the Ducks winning, 43-29, in Pullman. A very green Washington State QB Jayden De Laura still managed to throw for over 300 yards. Now a more-experienced presence behind center in a season where he has experienced success, he looks to kick it into high gear in what would be his signature moment as Cougars’ quarterback. But on defense, they will be facing some of the same guys that put together a compelling offensive performance.

Oregon’s defense has been all over the place in conference play this season, but there have been enough injury setbacks on that side of the ball to make them dicey in spots. That’s especially true against the pass, an area where this Washington State offense can do some damage with De Laura, along with targets Travell Harris and Calvin Jackson, Jr., among others.

Washington State is pretty solid. Not long ago a pass-heavy team where defense was an afterthought, they’ve since achieved a balance on both sides of the ball, while not totally giving up their big-play edge. And while they’ve been a little better and more consistent aerially than Oregon, the overall gap in production is small. Anthony Brown has hit some high notes this season through the air. A steely and experienced starter, he can get you a number of ways and he really helps diversify a run-game that far surpasses whatever Washington State offers with Max Borghi and Deon McIntosh.

With Kayvon Thibodeaux up-front making plays and opening things up for others, the Oregon “D” a bit more-thorough of a unit than what is on the opposite sideline. LB Noah Sewell gets all over the field, with secondary ball-hawks such as Verone McKinley, III. and Bennett Williams making a lot of difference-making plays. On both sides of the ball, the Ducks would seem to have the potential for greater playmaking

A game with a well-regarded Oregon team is really the high-point of urgency for the Cougars this season. A win puts them on the precipice of getting into the conference running. All in all, it doesn’t seem like there’s a ton separating the teams. Oregon is maybe a little better overall, but Washington State flexes an aerial game that more consistently helps put over the offense. Their respective defenses have been about equally effective overall against conference foes.

Take the Number on the Road Dog

Maybe a rested Washington State team that has collected its senses is ready to come into Eugene for their game of the year with some fire. With some losses in personnel, I’m not sure Oregon can gain significant separation on a capable Washington State team. If the Cougars can just hold up somewhat against the Ducks’ ground-game, they should be able to keep this one close and cover the spread. I’ll take the Cougars.

Loot’s Pick to Cover the Point Spread: I’m betting on the Washington State Cougars plus 14 points. Bet your Week 11 college football picks FREE by taking advantage of a 100% REAL CASH bonus on your first deposit of $100 to $1000 at Betnow Sportsbook!