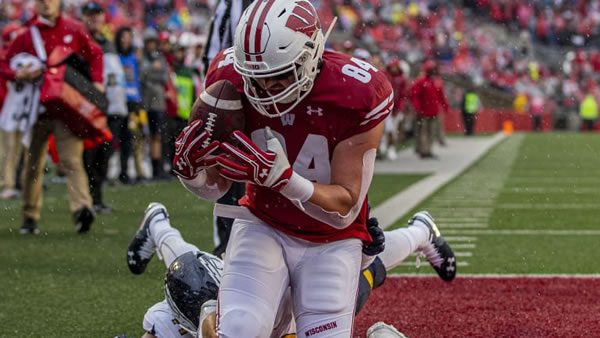 Penn State Nittany Lions (0-0, 0-0 ATS) v. Wisconsin Badgers (0-0, 0-0 ATS) NCAA Football Week 1 When: Saturday, September 4 at 12:00 ET Where: Camp Randall Stadium - Madison, WI TV: FOX Point Spread: PSU +4.5/WISC -4.5 Over/Under Total: 51 (Find the best sportsbooks >>> 100% bonuses! -105 odds instead of -110! Rebates! Same day payouts and more!) The autumn chill isn’t yet on the air but there is a fall feel in the Big Ten as it kicks off the 2021 season with some big time conference matchups. The best game on the conference slate in Week 1 has #19 Penn State heading to Madison to take on #12 Wisconsin. This is a cross-division contest so the loser isn’t necessarily in bad shape right away but both teams are looking for a fast start after uneven campaigns in 2020.

Penn State’s 0-5 start to last season was the worst start in program history but give credit where it’s due, the Lions finished with four straight wins, including a 4-0 ATS mark over the stretch. PSU is 6-1 against the spread in their last seven September games and 7-3 ATS in the last ten as the underdog. Wisconsin is just 1-4 against the spread in their last five games with the lone ATS win coming against Wake Forest in the bowl game. The Badgers are also 1-4 ATS in their last five as the favorite. Both defenses are reported to be stronger than their respective offenses so watch for the under to see plenty of action with the UNDER riding an 8-2 mark in Penn State’s last ten on the road and four of the last five overall for Wisconsin. These teams are not common foes considering they share a conference but Penn State has won each of the last four dating back to 2012.

A five game win streak to finish 2020 gives Penn State some momentum heading into the opener and a confident squad is a dangerous one. Any success in Madison - and perhaps the season as a whole - rests on the shoulders of QB Sean Clifford. The third year starter has the experience, the arm and good mobility but turnovers have been an issue at times and a lack of big plays hurt the offense last season. He lost a reliable target with TE Pat Freiermuth now in the NFL but the WR group is exciting with Jahan Dotson leading the way. Wisconsin has a good secondary but Dotson racked up 884 yards last season and will be a factor in this one. The offensive line is reported to be much improved in spring camp and their play could make the difference. The OL was one of the worst pass protections units in the Big Ten last season and it hampered the running game as well. That rush offense could boom with better line play as Noah Cain and Keyvonne Lee are joined by John Lovett who averaged 6.4 yards per carry for Baylor in 2019. The PSU defense returns the top-two tacklers from last season in LBs Ellis Brooks and Jesse Luteska but gone is leading pass-rusher Shaka Toney. Penn State may stand a decent chance at keeping Wisconsin’s run game down with solid play in the middle but it is unclear who will be counted on to pressure the QB. The secondary is very experienced with multiple fifth-year players slated to start. More Picks: Michigan State at Northwestern Point Spread Play >>>

2020 was not the typical Wisconsin season and it started with a disappointing running game. After decades of being one of the best in the business, the Badger rush offense fell to 62nd in the country and the offense finished 12th in the conference. After a fast start, Graham Mertz struggled with the consistent long down-and-distance situations. Covid took down Mertz and several receivers and things never really got on track in Madison. Mertz does have Danny Davis and Kendric Pryor back with TE Jake Ferguson completing a solid group of receivers. Jalen Berger might not be Jonathan Taylor but Berger showed enough flashes to think he can power this offense to its former glory behind another massive Badger offensive line. The Wisconsin defense did not disappoint last season and nine starters return to a unit that was top-5 in the country in yards allowed and third down stops. The linebacker group should produce at least one All Big Ten performer with Leo Chenal and Jack Sanborn poised to lead the team in tackles. The secondary is almost exclusively seniors that have at least three years of starting experience so watch for that group to lead the turnover charge again as Wisconsin has been 2nd in turnovers created since Jim Leonard became Defensive Coordinator.

Madison is a tough place to play and there will actually be fans to jump around this season so look for Wisconsin to ride that energy to a win. Penn State tends to solve issues under James Franklin but it takes some time - see Franklin’s 13-25 ATS record following a loss - and there were just too many issues last season to think the Lions are past them all. Wisconsin had their own failures to be sure but their constants of leading time of possession, winning the turnover battle and having solid line play on both sides makes their turn-around feel like more of a sure thing. The offenses as a whole may wash out to reveal no big advantage to either squad but Wisconsin’s defense is clearly the best unit on the field come Saturday and they should feel less pressure with the Badger offense slated to be more consistent. I think this one stays close with both teams trying the run early but the Wisconsin pass rush creases that PSU offensive line and puts Clifford in too much trouble to stay turnover-free. That swings the fortunes to the home team and the game script goes Wisconsin’s way in the second half en route to a 27-17 win. Ted Walker’s pick to cover the spread: Wisconsin Badgers minus the points! Question: Where are you betting your college football picks this season? Does your bookie offer you the ability to bet on games at -105 odds? Not likely! Did you even know that you could be betting ALL sports at reduced odds? Most don’t! Get on the reduced odds train TODAY by signing up at BetAnySports! Home of “Less Juice” betting!