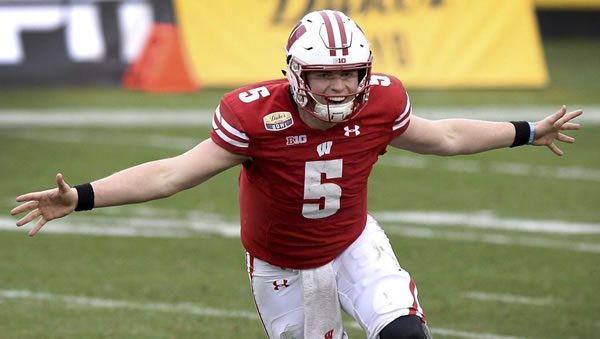 Wisconsin didn’t take the field until late October last season, and while things started off well with a 45-7 win against Illinois, much of the 2020 campaign was marred by Covid interruptions and cancellations. Graham Mertz showed promise at times but ultimately struggled with consistency and was clearly hampered by the irregular practice schedules. The Badger defense remained productive, but it wasn’t enough to make up for the offensive struggles, and Wisconsin finished with a 3-3 regular-season record. A win against Minnesota kept the Axe in Madison, and UW parlayed that into a Duke’s Mayo Bowl win to give them some momentum heading into 2021. ESPN has the Badgers at No. 16 in their preseason Power Rankings.

Mertz is the highest-rated QB recruit in Wisconsin history, and he looked the part against Illinois, going 20-for-21 for 248 yards and five touchdowns in the opener. That was as good as it got for Mertz on the season, and he finished with just eight touchdown passes in six games but did have a positive outing in the Bowl game and should only benefit from a return to standard practice and prep routines. Wisconsin will always be a running team, but Mertz could be the key figure in turning the tide against the likes of Ohio State.

Berger appears to be the next great running back in UW’s storied history after averaging 5.9 yards per carry in his first season. He played in just three contests due to Covid but was the best pure runner on the team, although he needs to develop a more patient style. Wisconsin will feature a massive offensive line, including seniors Kayden Lyles and Logan Bruss, who will open plenty of holes for Berger.

Ferguson is on the Mackey Award watch list after putting up 1,088 receiving yards and eight touchdowns in his first three seasons. He has been the most consistent pass catcher in each of the last two years and is a good bet to lead the team in touchdown receptions this season. He projects as a mid-round NFL draft pick at the moment, but a flashy season could improve that stock, and he will be a matchup problem for every defense the Badgers face.

Covid sidelined much of the Wisconsin receiving corps last year, which pushed the true freshman Dike into service well ahead of schedule. The youngster showed some flash with 154 yards receiving and 50 yards rushing in just a few contests, posting a 15.5 yards per catch average. He will be in the mix with seniors Danny Davis and Kendric Pryor, who chose to return for super-senior seasons under NCAA rules, giving Wisconsin depth at the position. Dike should factor in on the outside in what was Quintez Cephus’ old role with the other Badger wideouts more suited to the slot and the jet sweep game.

Sanborn enters his third year as a starter on the watch list for the Butkus award after a 2020 season that saw him rack up 52 tackles in five games. He has 6.5 career sacks and four interceptions over the last two seasons and will be the focal point of Jim Leonhard’s defense that has ranked third in scoring (17.2 ppg) since 2017.

Chenal led the team in tackles last season while chipping in three sacks and one interception. His presence alongside Sanborn gives Wisconsin one of the best LB groups in the Big Ten, and Badger linebackers have played a big role in UW recording the 2nd most interceptions in the NCAA under DC Jim Leonhard’s tenure.

The Wisconsin secondary is heavy on experience with seniors Faion Hicks and Caesar Williams at cornerback, but Nelson at safety could be the best performer of the back seven. Nelson was sixth on the team in tackles despite missing a game, and he played in just one game during his sophomore season. A full season on the field in 2021 should have Nelson among the team leaders in tackles and passes defended.

Wilder was fourth on the team in tackles in his first season as a starter and capped off the year with an interception in the bowl game. Wilder and Nelson can both help in the run game or cover the TE over the middle, and Wisconsin again has the safeties to produce another top-5 defense in pass efficiency.

Wisconsin plays most of its toughest games in Madison, and they luck out by missing Ohio State during the regular season. A date in Indy against the Buckeyes is likely if the Badgers win the Big Ten West, which they have done four times under Paul Chryst. Wisconsin’s hardest contents on paper also come early in the season, which limits the chances that key injuries would affect those games. Camp Randall is one of the toughest venues for visitors, and Madison will be in full jump-around mode with fans once again in attendance.

Wisconsin currently sits as a 4.5-point favorite in the opener. Despite being in the same conference, these teams have not met often, and PSU has won each of the last four, dating back to 2012. This could be a make-or-break type of game right out of the gate.

The Badgers recorded three wins over the Eagles under Barry Alvarez in the 1990s, but Eastern Michigan has proven tough for the Big Ten in recent years with wins over Rutgers, Purdue, and Illinois. Wisconsin should be just fine, provided they don’t get caught looking ahead.

Wisconsin gets a bonus with a bye week ahead of this marquee matchup at Soldier Field. It will be the first meeting between these schools since 1964 and one that could be made even more interesting if former Badger QB Jack Coan is under center for the Irish. Wisconsin has the advantage in terms of returning starters, but Notre Dame went 10-2 in each of the last two seasons. Notre Dame has struggled with top-10 teams in recent years. Will Wisconsin be that caliber this season?

This looks like the second half of a potentially brutal two-week stretch, but the game is in Madison, and Wisconsin has won five of the last seven against Michigan, beating the Wolverines by a combined score of 84-25 over the previous two. Michigan was just 2-4 last season and has finished better than 3rd in the Big Ten East just once under Jim Harbaugh.

Wisconsin has won nine of the last ten in this series, but that one likely cost UW a spot in the Playoff in 2019. They got some revenge with a 45-7 win last season and will look to put up another big number against an Illini defense that allowed at least 28 points in five of eight games last season.

This will be the first meeting between the programs, with Army going 9-3 last season with a tough 24-21 loss against West Virginia in their bowl game. The service academies have often given Power-5 schools trouble, but Wisconsin should have the discipline and line play to take care of business.

Wisconsin has won each of the last fourteen games in this series, and the defense has been spectacular, allowing more than 24 points on just one occasion over that span. Purdue has a 5-10 conference record over the last few seasons.

Iowa’s 28-7 win last year was one of the more lopsided results in a series that routinely features close games. Wisconsin had won seven of the previous eight heading into last year. Iowa finished 6-2 last season, with the losses coming by a combined five points. Wisconsin has a good record in Iowa City but benefits from this game being in Madison.

The Wildcats have been a pesky team in recent seasons with a 4-4 record against Wisconsin, and the Badgers have lost six of the last seven in Evanston. This one is at Camp Randall but will still be a challenging game with NW coming off a 7-2 campaign that included a Citrus Bowl win against Auburn.

The Huskers are just 1-8 against Wisconsin since joining the Big Ten, and there have been some truly embarrassing performances along the way. Scott Frost was supposed to change the direction at Nebraska, but he has a 12-20 overall record in three seasons, and the Huskers have never finished better than fifth in the division in that time.

Minnesota won the 2018 meeting in Madison but has a 1-16 record against Wisconsin dating back to their last home win in the series, which came in 2003. The Gophers were 3-4 last season after an 11-2 record the year prior. The Axe is a huge motivator for both teams, but a division title could be on the line this time around, as it was in 2019 when Wisconsin upset Minnesota to take the title.

Wisconsin has never made a Playoff appearance but had a close call in 2017-18 with a 12-1 record and lost what amounted to a play-in game against Ohio State in 2019. If Mertz proves to be the future NFL quarterback that some think he is and Jalen Berger continues the RB tradition, the Wisconsin offense should be a top-25 unit with upperclassmen at the other skill positions. Jim Leonhard’s senior-laden defense turns in another top-5 season in yards allowed and turnovers, giving Wisconsin the ability to hold down Ohio State and UW gets the nod as the Big Ten Champion. This scenario could even play out with a neutral-site loss to Notre Dame early, or even a slip against Iowa or Penn State, provided either school is an eventual 10-game winner.

If Covid wasn’t at the heart of Wisconsin’s struggles last season, this year could be eerily similar where a lack of consistency on offense puts too much pressure on the defense, and neither unit can help the other. With some tradition-rich programs on the early schedule, the Badgers could sit at 1-3 and be in danger of a 6-6 kind of season. Mertz looked great at times and very much a first-year starter at others. He absolutely needs to take a full step forward, or Wisconsin has no real shot of winning the West. Similarly, Berger needs to evolve as a patient runner that can keep Wisconsin in the short down-and-distance scenarios that have led to decades of success in Madison. The offensive and defensive lines should perform, as should the back-seven on defense, but injuries could lower the ceiling as Wisconsin isn’t particularly experienced beyond the two-deep. Bucky is in trouble if the consistency issues of 2020 continue or injuries mount. UW has gotten fat on the likes of Purdue, Nebraska, and Minnesota over the years, but those teams are always looking to reverse those trends, and a mediocre Wisconsin team can’t sleepwalk to wins against them all.

This will be a return to form kind of season but also one that includes some head-scratching moments that have been all-too-common for Badger fans. Wisconsin pounds its way to wins against the lesser teams but loses two during the run through Penn State, Notre Dame, Michigan, Iowa, and Minnesota. If they win the West, they will be in that familiar position of trying to knock off a juggernaut Ohio State team that is looking to win a National Championship. Wisconsin likely drops that contest and heads to the Citrus or Outback Bowl, although the Rose Bowl is in play if the Badgers would be ranked ahead of the other Big Ten teams and OSU is Playoff-bound. Where are you betting on college football this season? If you haven’t checked out the live betting platform at Bovada Sportsbook, you really should! It’s amazing! They also carry more games than all other sportsbooks. Your credit card will work for deposits, they give rebates on ALL your bets; win or lose! Lightning fast payouts too! Click here to register for an account at Bovada today! (It helps us stay in business too!)