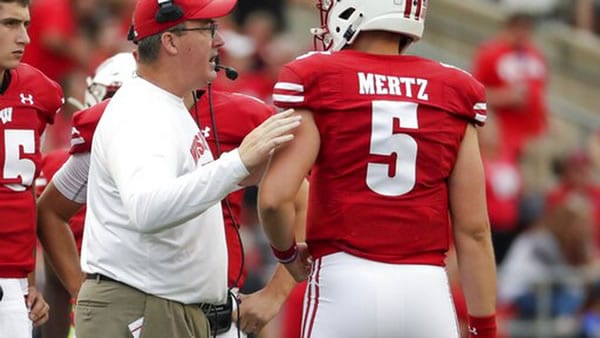 Point Spread: WISC -4/MICH +4 (Bet on games at -105! - Switching to reduced vig will save you thousands of dollars! WAY better than any bonus you could receive!)

The Big Ten has just a few games under its belt after a late start, but the conference is already at the halfway point of the season. One of the biggest matchups of their Week 4 has the Wisconsin Badgers heading to Ann Arbor for a night game against the Michigan Wolverines. Wisconsin had their last two contests canceled due to CoVid-19, but they have gotten a handle on that issue and should have their starting QB Graham Mertz back at the helm. The Badgers can still win the Big Ten West, but they need to play every game from here on out as a minimum of six games is required to qualify for the championship game, and they may need to win them all with Northwestern and Purdue also undefeated. Michigan has struggled since winning their opener, and distraction has now crept in with some openly wondering about the future plans of Jim Harbaugh. Wisconsin has won four of the last six in this series but will be looking for its first win at Michigan since the 2010 season.

There are some strong betting trends working in Wisconsin’s favor this week, starting with a 5-1 ATS mark against Michigan in the last six games in this series. UW has won each of the previous three when favored by six points or fewer against Michigan. Wisconsin is 13-4 against the spread as a road favorite and 16-7 ATS on the road overall. Michigan is 2-5 ATS in their last seven as the underdog and just 2-7 against the spread immediately following an ATS loss. The Over has some strong trends as well, with a 6-0 mark in the last six when Wisconsin is favored and a 6-1 record in the previous seven Badger games overall. The Over is 8-0 when Michigan is a home dog and 6-2 in the last eight when these teams have met. Wisconsin is getting about 65% of the action in early week betting with 58% of the money coming in on the Over.

COLLEGE KID BONUS! DEPOSIT $25, USE BONUS CODE ROOKIE200 AND THEY’LL ADD AN EXTRA $50 TO YOUR BETTING ACCOUNT AT INTERTOPS SPORTSBOOK!

Back in the Game

Wisconsin looked like they could be nationally relevant after a 45-7 rout of Illinois in the opener, but Bucky has been on the shelf since. The good news is that Graham Mertz - who went 20-for-21 in his first start - is scheduled to start, and he looks to be in a good spot with Michigan, allowing 287 passing yards per game. Garrett Groshek and Nakia Watson combined to rush for 100 yards against Illinois, but the yards per carry were down from the Jonathan Taylor days. Groshek is the more patient runner and could see the higher carry share while also being the better receiver of the two. Tight end Jake Ferguson caught three touchdowns in the opener and should be the #1 target going forward with WR Danny Davis (2-72-1) providing the deep threat. It is hard to know how good this defense is after just one game, but the early returns are good as Wisconsin held Illinois to eight total first downs while racking up three sacks and two takeaways. The Badger secondary is talented and experienced, and they will need both with Michigan averaging 290 passing yards per game.

It has been an ugly couple of weeks for Michigan, and they enter this game unranked for the first time in three years. The defense has failed to record a sack or take away in the losses to Michigan State and Indiana, allowing 330 passing yards and six total touchdown passes in those games. There is no defense that can survive without producing some negative plays, and Michigan is allowing over 400 yards and 29.7 points per game. Joe Milton has been as good as advertised, throwing for 869 yards and rushing for 102 more. The running game hasn’t helped much and really bottomed out against Indiana with just thirteen total yards on eighteen carries. Hassan Haskins leads the team with 157 rushing yards and is averaging nearly eight yards per tote. Ronnie Bell has 269 yards on 11 catches to lead the pass catchers and is in line for a good battle against Wisconsin’s Rachad Wildgoose. If Bell can win that one-on-one, Michigan should be able to keep up their pass game success.

There was plenty of uncertainty and still a few depth chart questions surrounding Wisconsin as they came out of quarantine, but the public feels good about UW, and this game has quickly been bet up to the current line after opening with Michigan as 1-point dogs. Michigan doesn’t look better now than the team that was on the wrong side of a 35-14 decision in Madison last season, and they won’t have a raucous Big House crowd to fuel them either. If Wisconsin has a quality quarterback, as it appears they do, they remain the class of the Big Ten West and could potentially give Ohio State a run for their money in the coming years. They certainly can take down a flailing Michigan squad as the Badgers still possess strong line play on both sides of the ball. Wisconsin hasn’t had the benefit of a typical bye week scenario, but this team runs their bread-and-butter regardless of opponent or situation. The Badgers may start slow after the layoff, but I expect the intermediate pass game to work for them, and that will open up the run. Michigan’s best bet would be to get in a bit of a high-paced back and forth contest, but they haven’t proved to be deep at the skill spots beyond Bell and Haskins. Wisconsin can scheme to take one away and leave Michigan playing a bit one-handed. Look for Milton to have some success with his legs, but Michigan comes up short with Wisconsin getting a 32-23 win.

Ted Walker’s Pick to Cover the Spread: Wisconsin. Bet your Week 11 college football picks for FREE by taking advantage of a 100% REAL CASH bonus on your first deposit of $100 to $300 at BetNow Sportsbook!