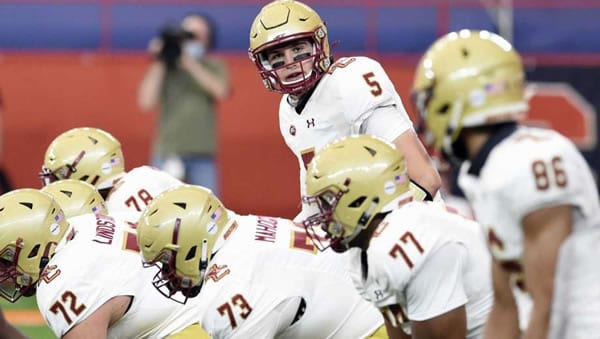 In what will be the 26th matchup of the now dubbed ‘Holy War,’ Boston College hosts Notre Dame for a Saturday afternoon showdown at Alumni Stadium. The Fighting Irish lead the all-time series 16-9 and have had a clear upper hand of late, having won seven in a row against the Eagles, including the last two by an average of 31 points per game and the previous three at Alumni Stadium by an average of over 20 points.

Notre Dame comes into the week on the highest of highs after upsetting top-ranked Clemson a week ago. The Irish have now ended three of the top five winning streaks in NCAA history (Oklahoma 45 games in 1973, Miami 36 games in 1988, and Clemson 36 games in 2020) and currently have the nation’s longest run of consecutive wins with 13. The toughest regular-season game the Irish have left is a road trip to Chapel Hill to take on UNC at the end of November. If they can get past them along with the rest of their remaining conference foes, they will be likely lined up with a rematch against Clemson in the ACC Championship Game on December 19th.

One of the major reasons that Notre Dame was able to pull the upset a week ago was the play of quarterback Ian Book. The Irish signal-caller passed for over 300 yards against Clemson, which marked the second time in three weeks he has been able to reach that total after only doing so once in his fifteen games prior. Book has also now gone six straight games without throwing an interception, with his only pick coming in week one against Duke. This has been an area of his game that has far improved over time, as he threw at least one interception in six of the last seven games of the 2018 season, but since has only thrown a pick in 4 of his past 20 games.

As the season has progressed, six players on the Irish roster have become the focus of the passing game, made evident by the fact they are the only ones on the team with over six receptions on the season. Javon McKinley is the team leader in receiving yards with 366, with 195 of those coming in the past two weeks, though he is still looking for his first touchdown reception of the season. Tight end Michael Mayer and receivers Avery Davis and Ben Skowronek have each caught two scores apiece, while tight end Tommy Tremble finally bounced back to relevance with three receptions against Clemson after putting up just one per game in his previous four contests. Fourth on the team in catches and receiving yards is sophomore running back Kyren Williams, who continues to show future stardom potential on a weekly basis.

Get Jay’s Georgia vs. Missouri Pick >>>

On the season, Kyren Williams has rushed for 740 yards and ten touchdowns with an average of 6.1 yards per carry. Two of those touchdowns came in the overtime last week against Clemson to go along with a third he scored on Notre Dame’s second offensive play of the game. The sophomore back has now scored six times in his previous three games and will undoubtedly be the focal point of the Irish running game for the remainder of the season.

This Saturday’s matchup will have special meaning for Boston College as it is their now annual ‘Red Bandana Game.’ The team will wear special uniforms to honor the memory of one of many heroes of 9/11, Welles Crowther. The Eagle alumni lost his life while saving 18 others in the south tower of the World Trade Center, selflessly going back up and down the stairs while leading as many people as he could to safety. The tradition started in 2014 with an upset win against 17-point favorite USC and has since led to further unexpected victories against Miami and Florida State. BC will hope to add to that list as a 13-point dog this week against the Irish, though win or lose, it’s a victory for all to honor a true hero the likes of Welles Crowther.

Leading the way for Boston College at quarterback is sophomore quarterback Phil Jurkovec, who transferred over from Notre Dame in the offseason. The dual-threat signal-caller has been efficient at avoiding turnovers this season with an impressive 15-4 TD/INT ratio and has also been able to show off his running ability with three scores on the ground. Jurkovec has performed well against ranked teams this season, with a 300-yard performance against UNC and Virginia Tech, and has also been especially adept at protecting the ball of late, having gone three straight games without throwing an interception. It will be interesting to see if he is able to press the Irish pass defense down the field at all, as, despite his impressive numbers, Jurkovec hasn’t had much success throwing deep and is just 13th in the 14 team ACC in yards per attempt and 9th in quarterback rating.

The Eagles passing game has been relied upon more than ever this season, with the rushing attack ranking just 110th in the country this season. They clearly miss AJ Dillon, but it’s not just the loss of the now Green Bay Packer that has hurt the team, as the BC line up front is no longer close to being the force it once was (Chris Lindstrom in 2019 is the only Eagle offensive lineman to get taken in the draft over the past five years). Junior David Bailey is the best BC running back this season and has scored three touchdowns over his past three games while also coming off the best performance of the year a week ago against Syracuse with 125 yards rushing. Bailey is the only Eagles running back to rush for a touchdown this season and will undoubtedly have his work cut out for him on Saturday against an Irish run defense that ranks 5th in the NCAA in yards allowed and was just able to near shutdown Clemson superback Travis Etienne on the ground.

Wide receiver Zay Flowers and tight end Hunter Long are the top two Eagle targets for quarterback Phil Jurkovec. Flowers is riding a current three-game scoring streak, and his six receiving touchdowns are tied for the ACC conference lead. Long is the team leader in receptions with 43 and has already almost matched his team-leading yardage (509) output a season ago with 501 yards to go along with three touchdowns this season. Both are expected to see plenty of action this weekend in a game in which BC will likely need to pass a great deal in to stay competitive.

For those interested in against the spread trends, there are some you may find interesting for Saturday’s game. In their previous head-to-head matchups, the underdog in ND/BC games is 9-4 in the last 13, the road team is 5-2 in the last seven, and the under has hit in the 8 of the last 9. The under continues to be a popular trend, as it has hit in 8 of Boston College’s last 11 games and seven of Notre Dame’s last ten road games. One difference between the teams has been their response to success, as Notre Dame has gone 8-3 against the spread in their previous 11 games following a victory, while Boston College is an exact opposite 3-8.

There is undoubtedly a reason to be concerned if backing Notre Dame this weekend due to the letdown factor after their big upset last weekend against Clemson. They are also going up against a BC team that has been incredibly successful at Alumni Stadium versus the odds, with the Eagles having gone 10-0-1 against the spread in their last 12 games as a home underdog. Despite those two points, I still believe the wiser choice this week is the Irish. Since the start of the 2017 season, Notre Dame is 40-6, and their only losses have come against top 20 opponents. BC did look strong against Clemson in the first half, but they aren’t that close to being a ranked caliber team, especially when you consider they lost all three games they played against top 25 opponents this season, and of their five victories, four have come against Texas State, Syracuse, Duke, and Georgia Tech, who are a combined 5-25 this season. The Eagles losing to ranked opponents is certainly nothing new, as they have dropped their last 18 straight against top 25 teams with just one win in their previous 28 such games. I expect that streak to continue on Saturday, with Notre Dame eventually pulling away enough in the second half to get the win and cover on the road against Boston College.

Mike’s Pick to Cover the Point Spread: Notre Dame -13. Question: Why would you bet on games at -110 odds when you could be laying only -105 at BetAnySports? It just doesn’t make sense!