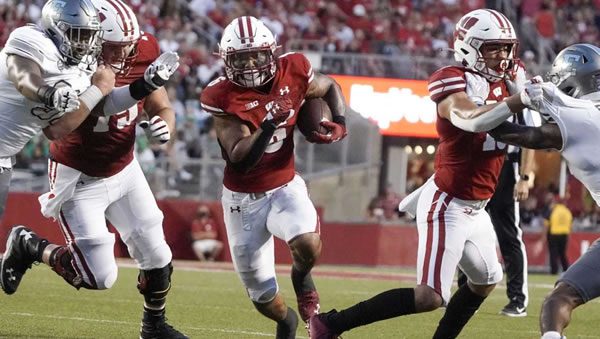 Point Spread: WISC -13/RUTG +13 (Opened at -11) You can make Wisc a touchdown underdog by placing them in a massive 20 point teaser at Wagerweb Sportsbook!)

In the Big 10 West, the Wisconsin Badgers started the season 1-3, and it seemed that all was lost before the Badgers even hit the halfway point of the year. The Badgers suffered back-to-back 20+ point losses to Notre Dame and Michigan, where their defense kept them in the game until the 4th quarter. Following their 38-17 loss to Michigan, the Badgers rattled off four straight wins, including a huge win last week over the ninth-ranked Iowa Hawkeyes. Offensively the Badgers snuck back into the top 100 and average 353.2 YPG in total offense. Defensively, the Badgers are the No. 1 defense in the country, allowing just 214.6 YPG and 3.8 yards per play through eight games.

In the Big 10 East, the Rutgers Scarlet Knights had a very different start compared to the Badgers, with a 3-0 record after three games. The Scarlet Knights then saw a difficult three weeks, facing ranked Michigan, Ohio State, and Michigan State. In those three games, the Rutgers offense could only muster 13 points in each game. The skid continued one more week with a loss to Northwestern before they finally got back into the win column last week against Illinois. Rutgers finds themselves outside the top 100 offensively, averaging just 342.4 YPG. Much like the Badgers, Rutgers is far better defensively as they allow 359.9 YPG, which is 52nd best in the country.

Back to the Run Game

Growing up as a Badgers fan my whole life, the identity of the Wisconsin Badgers has always been their dominant run game. When the Badgers started the year with their 1-3 start, they heavily leaned on the passing game for the first time since the Russell Wilson era. Following their loss to Michigan, where they only rushed for 43 yards on 32 attempts, a switch went off in the Badgers locker room to get back to who they truly are. On their four-game win streak, the Badgers have had a 100-yard rusher in all those games. The 1-2 punch of Allen and Mellusi combined last week for 152 yards against the Iowa defense. Look for Wisconsin to keep that trend this weekend against the Rutgers defense, who gives up 143.8 YPG on the ground and allows just shy of four yards per carry.

Part of the Scarlet Knights’ success this season has been their ability to force turnovers. Going into Saturday’s game against the Badgers, Rutgers holds a +5-turnover margin, which includes seven fumble recoveries and four interceptions. The Badgers, on the other hand, with the top-ranked defense in the country and 11 turnovers forced, hold a -5-margin due to their 16 turnovers offensively with nine interceptions. Since the Badgers have returned to the run game the last four games, they have only turned the ball over five times compared to 14 in their first four games. So long as the Badgers offense keeps with their running trend and keeps the ball out of Mertz’s hands, the Badgers should be able to run away with this game. If Rutgers can keep the Badgers run game at bay and force the Badgers offense to pass more, we may see a closer game than expected on Saturday, but I don’t see that happening.

Best Defense in the Country

With a 5-3 record, the Badgers must be thankful for their defense to step up when needed to give them cushions offensively, which allows them to chew the clock with their run game. The Badgers have the top-ranked defense in the country, allowing just 214.6 YPG of total offense. A developing situation on the Rutgers side, which may allow the Wisconsin defense to have another field day this weekend, is Rutgers losing QB Noah Vedral in their last game. Vedral is listed as “questionable” for Saturday’s contest, which may force the Scarlet Knights to lean more on the run game. The problem with that is the Badgers defense only allows 49.6 YPG on the ground. No matter what way you look at it, the Badgers defense has been terrorizing opposing offenses all year, and that trend will continue Saturday with or without Rutgers QB1.

Saturday’s matchup will be only the fourth time these teams have met since the 2014 season. Even though this year’s game features very different rosters, this cross Big 10 matchup has been lopsided as the Badgers have won the last three games by comfortable margins. The most recent game in 2018 was the closest one when the Badgers won 31-17. The Badgers offense gashed the Rutgers defense with 317 yards on the ground in that game as well.

How the Public is Betting the Wisconsin Badgers vs. Rutgers Scarlet Knights

65% are betting the Badgers against the spread.

Saturday’s matchup features two teams on opposite sides of the spectrum defensively. So long as the Badgers stay mistake-free, they should take an early lead and then dominate the time of possession with the run game. I wouldn’t be surprised if the Badgers defense only gives up one or two scores late with backups in the game. In Badger’s country, we say, “Bucky by a billion”, but I’ll just say take the Badgers to cover the -12 point spread. Bet your Week 10 NCAA football picks for FREE by taking advantage of a 100% REAL CASH bonus on your first deposit of $100 to $300 at MyBookie Sportsbook! (Must sign up through this special link AND use bonus code PREDICT100 to receive the special bonus!)