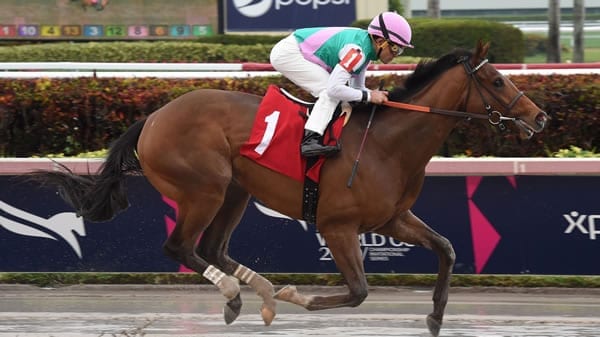 There are numerous ways to go with your wagers in the 2019 Fountain of Youth Stakes, which is the highlight of a stakes-filled card at Gulfstream Park on Saturday. It is also a must-watch race as the most important Kentucky Derby prep to date this year.

Morning-line favorite Hidden Scroll is the horse everyone will be watching. Trained by Hall of Famer Bill Mott and ridden by top jockey Joel Rosario, Hidden Scroll comes off a 14-length in-hand score going a mile over a wet track at Gulfstream Park in his first and only lifetime start on January 26. Mott doesn’t push his horses, which made Hidden Scroll’s debut win even more impressive.

Rated inside while under pressure on the lead through a very fast pace, Hidden Scroll opened up after a half and drew off without urging to earn the field’s highest Beyer Speed Figure at 104. He’s had three maintenance works since that race, he looks like he can rate, and he should at a minimum take care of all the other speed in here. We don’t know how he’ll react if he gets into a stretch battle, but he might not have to. A repeat of his last race will make him tough to beat.

Hidden Scroll appears to have the most raw talent in the Fountain of Youth, but his lone start and win came on a wet track and he’s moving way up in class. That’s balanced by the fact that he arguably has the best trainer in the field in Bill Mott and a top rider in Joel Rosario. At 9/5 he’s probably the play. Any lower and we look elsewhere.

Code of Honor also has a great trainer in Shug McGaughey III and retains Hall of Fame rider John Velazquez, which almost guarantees him a great trip in the Fountain of Youth. He made an early move in his first start off the layoff in the one-mile Mucho Macho Man Stakes at Gulfstream Park on January 5 and looked like a short horse finishing an even fourth.

That was surprising considering his trainer is one of the best in the business, but that race could very well have been designed as a tightener for this race and more. Runner-up in the Champagne Stakes-G1 as a 2-year-old, Code of Honor has had a number of good works and should move forward off his last.

Undefeated 2-for-2 Global Campaign is a half-brother to San Felipe Stakes-G2 winner Bolt d’Oro, who was also one of the favorites for last year’s Kentucky Derby. He’s done everything asked of him in both his races, he learned how to rate in his last, and he was wrapped up late in both his victories, the second going the Fountain of Youth distance of 1 1/16-miles. His stride looked a little green in the stretch in his opener but improved slightly in his second start. His best Beyer Speed Figure was the 85 he scored in his debut, but there appears to be lots of upside here based on both talent and pedigree. We’ll be very surprised if this horse goes off at anything close to his 10-1 morning-line odds.

Also undefeated, 2-for-2 Vekoma makes his first start since winning the Nashua Stakes-G3 going a mile at Aqueduct last fall. He gets first-time Lasix and comes into the race with a bullet five-eighths work, which isn’t surprising, as he looks like a horse that loves to run. He has natural speed and stalked a quick duel while rating in the Nashua, but he does have a bit of an odd way of going and he lugged in late in both of his wins.

BET ON HORSE RACES ONLINE USING CREDIT CARD? VISIT BOVADA GET A 50% BONUS UP TO $250 FREE!

Vekoma recorded a 97 Beyer Speed Figure winning the one-turn Nashua, so he does appear to have some talent, but you have to think he is going to need a race and these are probably tougher than what he faced as a 2-year-old. Trainer George Weaver is winning at a 24% clip right now and is a solid 23% off the layoff but has only a seven percent win clip in graded stakes.

Everfast made a determined willing run in in his second start off the layoff to finish a good second in the Holy Bull Stakes at Gulfstream at 128-1. He’ll probably get overlooked again in the Fountain of Youth, and if the others don’t feel like running this horse can make them pay. The 83 Beyer Figure he got for his runner-up finish in the Holy Bull likely won’t be good enough to win this, but at long odds if he gets a duel to stalk, he could finish in the money.

Signalman makes his first start of the year after parlaying inside trips last year into a third-place finish in the Breeders’ Cup Juvenile-G1 and a win in the Kentucky Jockey Club Stakes-G2, both at Churchill Downs. He looked nowhere near mature running those races and could make a big move forward if he’s grown into himself.

Trainer Kenneth McPeek is winning at 10% off the layoff and 15% in graded stakes. Signalman won his second career start off a similar layoff going seven furlongs, has already won at the Fountain of Youth distance and might just be a natural router, which would make him easier to have ready for this race. There’s a chance we might have this horse rated too low based on his proven class as a 2-year-old and the fact that he has won off a layoff. If he’s 5-1 or better, he might be worth a flyer, at least your exotic wagers.

Frosted Grace adds speed but may not even be fast enough to keep up with the real speed in here if it decides to go early. He had a bit of an uncomfortable trip behind horses in his most recent start in the seven-furlong Swale Stakes-G3, never really steadying but wanting to make a move early in the race and being forced to wait. When he finally did get clear in the stretch he flattened out.

Union’s Destiny made his first start off a four-month layoff on December 8 in the Smooth Air Stakes at Gulfstream Park and was hard-rated early before coming with a bit of rally wide behind a stretch battle to earn a 79 Beyer Speed Figure. He has some natural speed and could improve as another in here that is still learning how to run.

Epic Dream was sent early in his first start of the year in the Holy Bull-G2 and had things all to himself until the stretch. Although he has passed horses in his career, his game looks to be speed, and there is too much of that in here for him. Jockey Irad Ortiz Jr. also takes off him to ride Bourbon War.

An even fourth in the Remsen-G2 going 1 1/8-miles last year, Bourbon War comes into the race with a decent win in an N1X allowance at Gulfstream after getting a nice guided trip between horses and earning an 89 Beyer Speed Figure for his efforts. Although it was a comfortable 2 ¼-length win, he was still being ridden at the end. His recent win at the distance and his rider both give him a shot in here at what could be a nice price.

Longshot Gladiator King has been beaten double digits every time he has tried these kind and he is impossible to recommended in here. He comes into this race off a third-place finish in the five-furlong Texas Glitter Stakes on the turf at Gulfstream on February 23 and his trainer has a three percent win clip. He’ll show speed but we’re guessing not for long.

The race sets up with Epic Dreamer, Gladiator King, Hidden Scroll and maybe even Union’s Destiny and Frosted Grace wanting the lead, followed by likely presser/duel stalker types Vekoma and Global Campaign. Behind them will be Bourbon War and Everfast followed by Signalman and possible trailer Code of Honor. It’s difficult to tell how close the latter will be, as he does have some speed, although not enough to go with the leaders early.

If Hidden Scroll doesn’t open up from the gate, he will rate next to the other speed horses, but should put them away on the turn. He’ll then have to turn back Global Campaign, Vekoma, Bourbon War and Signalman. If he can’t turn that group back and open up, we’ll guess that Global Campaign and his pedigree will take over. If Hidden Scroll turns back all four of the aforementioned rivals, he will then have to hold off Code Of Honor to complete our exactor.

It’s always easy to predict what will happen, before the race!

Visit and bookmark to get Gulfstream Park racing picks every race day!