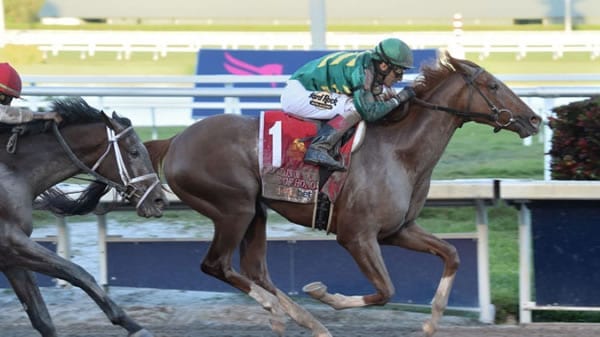 Code of Honor came rolling home as predicted and won the Fountain of Youth Stakes-G2 at Gulfstream Park as a huge 9-1 overlay on Saturday, while favorite Hidden Scroll faded to fourth after engaging in a pace battle with a 132-1 longshot Gladiator King, but Predictem.com box players still made a healthy score when our top five picks finished in the top five spots!

As suggested in our advance, when our top pick Hidden Scroll went off at less than his 9/5 morning-line odds, we went looking for value elsewhere and found it with our second pick, Code of Honor, who we thought should have been 4-1. When he went off at 9-1, we made a small win bet, wheeled him up and down in the exactas and boxed our top five selections.

The race set up somewhat as predicted, with Hidden Scroll taking care of the other speed in the race. The problem was that he went too fast up front outside Gladiator King and probably should have rated behind that one.

Hidden Scroll took a pressured lead outside of Gladiator King early and was pressured through quick fractions of 22.80 and 45.69 before shaking that pretender and opening a clear lead on the turn. Hidden Scroll then shook off a bid from Global Campaign, who had been tracking the fast pace from just back in third.

Global Campaign tired in late turn when unable to get to Hidden Scroll through six furlongs in 1:10.42, but at the same time, Code of Honor, who had been stalking from a nice position inside, and Vekoma, to his outside, both made their moves to go after the Hidden Scroll.

Vekoma couldn’t match strides with Code of Honor when that one challenged outside Hidden Scroll in early stretch, but he did make a place bid in the drive while clearly needing the race. The quick pace and additional effort required to turn back Global Campaign on the turn took its toll on Hidden Scroll, and by mid-stretch, he gave way to Code of Honor.

Code of Honor opened up and had just enough left to hold off a hard-charging Bourbon War, thanks to a perfectly timed rider by Hall of Famer John Velazquez. Code of Honor got the mile in 1:36.84 and saved just enough to win by three-quarters of a length over Bourbon War. It was two lengths back to Vekoma in third, a neck in front of Hidden Scroll. Global Campaign finished fifth, 2 ½-lengths behind Hidden Scroll.

So how do the performances in the Fountain of Youth influence our 2019 Kentucky Derby Picks?

The top five finishers plus one will stay on the road to the Derby. The remainder will need to find their fortune elsewhere.

Winner Code of Honor can probably improve a few more notches and fits into the Kentucky Derby picture as a rallier with a top trainer. Runner-up Bourbon War ran big for the second time in a row and was absolutely flying at the end of the race while also moving up in class. He looks like he’s just learning to time his run and is also on the improve. Third-place finisher Vekoma made a nice move outside the winner but came up short off the four-month layoff. He gets another chance to improve.

Fourth-place finisher Hidden Scroll might have been able to finish second with a better rating job. He’s also still learning and needs to harness his natural speed and talent before he’ll be able to make a serious run at winning the Kentucky Derby. He was making a big step up in class for the Fountain of Youth and still ran decently considering he didn’t have the seasoning of the rivals that finished ahead of him. Hall of Fame trainer Bill Mott can’t be underestimated, and it will be interesting to see what he does with this horse next.

Fifth-place finisher Global Campaign was moving up in class for the Fountain of Youth off two easy wins, and after staying close to the fast pace and making his bid on the turn, he wilted in the drive. Sagamore Racing reported after the race that he had grabbed himself out of the gate, which may have had some bearing on his performance, but horses that win their preps easily (as he did) often don’t get the air they need to move to the next fitness level. This horse should be much fitter now, and his next race will tell us quite a bit about where he stands on the road to the Derby.

Sixth-place finisher Union’s Destiny was wide early and passed tired horses late in a rather lackluster effort. We really can’t see why he’d stay on the road to the Derby after that performance. Seventh-place finisher Signalman came into the race off a four-month layoff, had a decent trip and had nothing to offer in the stretch. He was a short horse and gets another chance, but he’s really going to have to step it up a notch in his next start.

McGaughey said that winner Honor Code came out of the Fountain of Youth fine and had already shipped back to Payson Park to prepare for his next start, which will likely be the Florida Derby-G1 on March 30. McGaughey took a similar path when he won the 2013 Kentucky Derby with Orb.

Next Saturday we have three more Kentucky Derby preps including the one-mile Gotham Stakes-G3 at Aqueduct, the San Felipe Stakes-G2 going 1 1/16-miles at Santa Anita and the Tampa Bay Derby-G2, also at 1 1/16-miles, at Tampa Bay Downs.

Make sure to follow our 2019 Kentucky Derby Picks page, which will now be updated Monday’s after the weekend Derby preps have been run. If you get to know the contenders before the Kentucky Derby runs on Saturday, May 4, 2019, you’ll have a much better chance of making a big score on Derby Day!