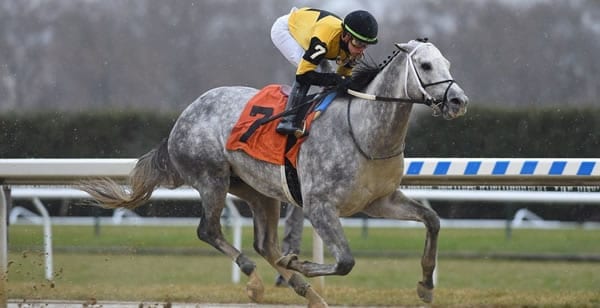 Three solid speed horses should set the 2020 Louisiana Derby up for the ralliers on Saturday, and Enforceable looks to be the best of the bunch.

Enforceable made a nice move to win the Lecomte Stakes-G3 two starts ago at Fair Grounds and made a bit of an early move in the Risen Star-G2 in his last before waiting just a touch on the turn and rallying to finish second. He’s the classiest of the ralliers, but will still need a perfectly timed ride and a battle up front to set up his run. He’s the win-place-show part-wheel horse for your superfectas.

Chestertown was checked for the first quarter in his most recent, advanced between horses on the turn for home and waited briefly before showing good energy late and finishing second beaten a neck by fellow Louisiana Derby entrant Shake Some Action, who had a better trip. Chestertown’s numbers don’t quite match up with the best in here, but he looks like he’ll go further, and he might just get a perfect trip with the rider switch to Johnny V.

Sharecropper finished fourth in the same race that Chestertown and Shake Some Action come out of. He had to wait a bit inside at the top of the stretch in that race and was willing when he got clear, but we’re guessing his trouble wasn’t enough to make a difference in the outcome.

Royal Act ran a good wide race in the R. B. Lewis-G3 and signaled his possible class with a second-place finish behind gamer Thousand Words. He’s another who could get a nice trip in here stalking a duel at a good price. Portos dropped well back in the Withers Stakes-G3 at Aqueduct before rallying to finish third. He looks like he’s still learning and could improve. Is he ready to wake up? Maybe. But will that be good enough?

New York Traffic is all speed, and Modernist and Wells Bayou will likely pressure him on the front. Modernist put him away in the Risen Star and should do so again here, while Wells Bayou had a clear lead in the Southwest Stakes-G3 in his last and couldn’t hold it in the drive.

Lynn’s Map seems to be the wise guy horse, but we’re not sure we agree. He rallied from last to finish sixth beaten four lengths by Modernist in the Risen Star, and he could improve on that placing with a fast pace up front a perfectly timed ride, but we’re guessing no better than third or fourth.

We’ll key Enforceable in the superfecta and bet him across the board as the class rallier of the field. We’ll also bet a little win-place money on Chestertown as our longshot to stalk a likely duel and pounce into action in the stretch on the rider switch to Johnny V.

Modernist should force the pace from his wide post and take a few notches out of the other speed horses when the running starts. He should hold on for a piece. Royal Act is a bit of a question mark, but he did face a very tough horse in his last and could make a dent in the superfecta, also at a price. The last horse we’ll mention is Major Fed. He looks like a grinder who could get a perfect trip from the rail and rally late to slip into your superfectas.