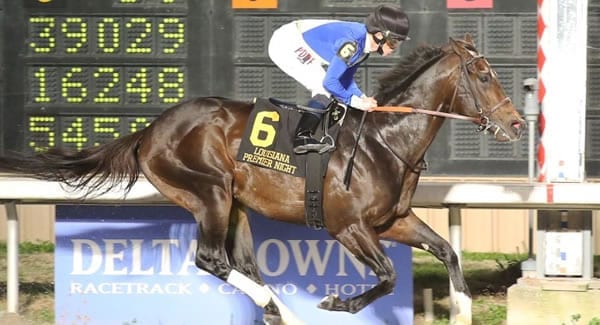 No Parole attempts theft in Rebel Stakes at Oaklawn Park

Nadal appears to be a standout on paper in the Rebel Stakes at Oaklawn Park today, but at a short price we’ll be looking elsewhere. We can’t blame you if you stick with him, as he has shown both talent and heart, but you already know we have an aversion to favourites. We want to make a score, not just cash a bet.

Nadal has certainly been impressive in both of his lifetime starts for trainer Bob Baffert, who has won this race six times. In his most recent start in the 7-furlong San Vicente-G2 at Santa Anita on February 9, he dueled throughout on a fast pace, turned back his game duel rival in the stretch and still had enough left to hold off comebacking champion Storm the Court.

The question is, will Nadal go the same route as Thousand Words, another Baffert trainee that ran two huge winning races only to come up with a dud in his latest. The San Vicente was not an easy race.

One of the two main speed horses in the Rebel, Nadal gets blinkers off today and might just let outside speeder No Parole rival take the lead early. Whether Nadal can come from off the pace remains to be seen. He’s probably deserving of his morning line favourite status at 5/2, but there are some minor question marks, including the fact that there is another solid speed horse in here, and he’ll have to go further to today.

No Parole has been listed at 8-1 on the morning line and he might just steal the race. He’s won three in a row against state bred company and now gets a severe class test, but he is quick and top trainer Tom Amoss thinks he’s earned his shot against the better horses he’ll meet in the Rebel. He’s definitely got some talent and is much too good for the restricted company. We think he’s worth a shot on the front end at a price, especially considering rain is in the forecast for Oaklawn Park. No Parole wired a field in the wet two starts ago. Jockey James Graham is also an underrated jockey. The question is whether his restricted-company speed will be enough to overcome the proven class speed of Nadal, which is why we’ll get a price.

Trainer Steve Asmussen has entered three horses in the Rebel in an effort to beat Baffert. Silver Prospector won the Southwest Stakes-G3 at Oaklawn in his last start after a perfect trip inside. He’ll be coming from just off the pace and has some proven class to him. Basin hasn’t run since winning the Hopeful Stakes-G1 in the slop last year with a perfect trip stalking a duel at Saratoga and is a bit of a surprise package, but is also listed at only 3-1 on the morning line and doesn’t appear to be much of bargain at that price. Asmussen is 23% off this type of layoff however, and top jock Javier Castellano is in the saddle for today’s race. Excession finished fifth in the Risen Star-G2 at Fairgrounds in his last after breaking through the gate and looks like he could rally into the superfecta as a longshot if he gets some pace to run at.

Three Technique made his first start off the layoff in the muddy $150,000 Smarty Jones at Oaklawn Park on January 24 and finished a solid second while obviously running out of air late, but he also left Silver Prospector in his wake that day, which makes him interesting in here. The problem is his morning line odds of 7/2, which is a bit of a short price.

Rounding out the field are Coach Bahe, who broke his maiden in the slop at Fairgrounds going a mile in his third lifetime start on February 5, and American Theorem, who makes his first start since finishing second in the American Pharoah-G1 at Santa Anita on September 27 last year.

Coach Bahe gets first-time Lasix for this stiff class jump and could improve, but he’ll need to be quite a few lengths better to compete with this bunch. American Theorem was making only his second lifetime start in the American Pharoah-G1, but that turned out to be a key race that included third-place finisher Storm the Court, who came back to win the Breeders’ Cup Juvenile-G1. A horse to watch for sure, and he might need a race, but he did win his first lifetime start.

The race sets up with No Parole on the lead and Nadal likely to be close while rating without blinkers. Nadal’s natural class speed may be too much for No Parole, but at 8-1 No Parole is the steal play. If these two hook up at some point, the best of the ralliers should be Silver Prospector and Three Technique.

We’ll pass on Nadal at a short price knowing full well he could beat us. Instead we’ll play No Parole and Three Technique to win and wheel No Parole, Three Technique and Silver Prospector to the board in 20-cent superfectas, hoping Nadal runs out of the money and gives us a big payoff.