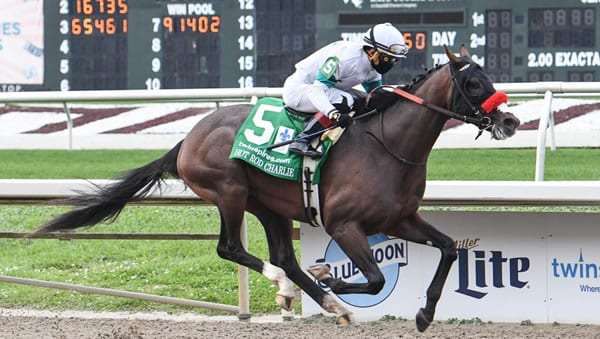 Bet your Kentucky Derby picks for FREE by taking advantage of a 50% REAL CASH bonus on your first deposit of $100 to $500 at Bovada Sportsbook! Your credit card WILL work there for deposits AND you’ll receive rebates on ALL your bets; win or lose!

There are only two or three days a year when you can truly make a big score at the races, and the first Saturday in May — Kentucky Derby Day — is definitely one of them.

Hot Rod Charlie has been our 2021 Kentucky Derby pick since long before winning the Louisiana Derby-G2 on March 20. The big strapping son of 2013 Preakness Stakes winner Oxbow has been flourishing since he arrived in Kentucky with his multi-millionaire companion Lava Man and it appears that all systems are go.

Second in the Breeders’ Cup Juvenile last year at 94-1, he’ll be a long way from those odds in the Kentucky Derby, but he should still be 6-1 or better, and we’ll certainly take those odds. In his comeback race before the Louisiana Derby, Hot Rod Charlie finished a gutsy third beaten a neck to fellow Derby entrant Medina Spirit in the Robert B. Lewis-G3 at Santa Anita, going 1 1/16-miles, which indicated he was for real. He outclassed his rivals in the Louisiana Derby (remember we picked him in that race!) and wired the field going 1 3/16-miles, which set him up perfectly for the Kentucky Derby.

Two-time Derby winning trainer Doug O’Neill knew what he had after that race, as did we. For some strange reason, jockey Joel Rosario switched to fellow Derby entrant Rock Your World after the Louisiana Derby, and we have no idea why even though rumors abound. Hot Rod Charlie now gets top California jockey Flavien Prat for the Derby, and that shouldn’t be a problem even though this is a tricky horse to ride.
Hot Rod Charlie has multiple moves in him, and if Prat uses too many of them before the stretch run, that could be a problem late. But this horse is fit. He’s loving Churchill Downs in the morning. He’ll get the distance, he has multiple gears, and he has guts. He should also get a perfect trip just behind the pacesetters, which is the ideal spot for a Kentucky Derby winner. Prat will have to time his move perfectly, but if he does, it should be just enough to win.

We were really torn between the undefeated Essential Quality and Florida Derby-G1 winner Known Agenda for the runner-up spot, but we’re going to go with Known Agenda despite his terrible Post 1 draw. Trained by Todd Pletcher, who has won the Kentucky Derby twice, Known Agenda will get the services of the best rider in the country in Irad Ortiz Jr., and we’re hoping Ortiz can work his magic to give this horse some kind of a shot when they turn for home. In a perfect world, he would get a dream trip along the rail and do a Calvin Borel on them, but that’s a 50/50 proposition.

Known Agenda is still learning, but he has more talent than many in here, and we have a feeling we haven’t seen the best of him yet. He romped by late to win the Florida Derby and still looked like he barely knew what he was doing. He’s been getting a little sharper in each of his races, and he’s definitely going to get educated again in the 20-horse Kentucky Derby field. The son of 2007 Preakness and Breeders’ Cup Classic winner Curlin will likely be coming out of nowhere late, and there should be a solid early pace battle to set up his late run.

This year’s Kentucky Derby could easily turn out to be a rematch between morning-line favorite Essential Quality and Hot Rod Charlie when they turn for home, and it’s tough to go against an undefeated champion.
Essential Quality has won four graded stakes in a row, and he proved he could do it the hard way in both the Breeders’ Cup Classic last year and his latest, the Bluegrass Stakes-G2, in which he was pushed to the limit to win after a stretch-long drive to defeat fellow Derby entrant Highly Motivated by a neck.

There are two reasons we’ll play against Essential Quality in the Derby, besides the fact that he’ll probably be heavily favored. We’re not sure if he’ll go the 1 ¼-miles and we’re thinking the tough Bluegrass stretch battle might have taken something out of him. That being said, this horse hates to lose, and in the courage category, we rank him equal to Hot Rod Charlie. He just finds a way to win. Luis Saez, who was disqualified from first in the 2019 Kentucky Derby aboard Maximum Security, gets a shot to redeem himself here, and he’s been aboard Essential Quality for his last four wins, all stakes.
Rock Your World rounds out our top four selections for this year’s Kentucky Derby, and we’re not quite sure what to make of him yet. After two grassy wins, he switched over to dirt and rather easily won the Santa Anita Derby-G1 on the front end to remain undefeated. We’re wondering if he beat anything in the Santa Anita Derby that wanted to run further than 1 1/16-miles, and he’s likely going to face much tougher pace pressure in the Kentucky Derby, not to mention Hot Rod Charlie and Essential Quality breathing down his neck on the final turn.

This race is much tougher than the Santa Anita Derby, and Rock Your World may not be quite battle-hardened yet. Still, he’s one of three undefeated horses in this year’s Derby, and he has to be respected with top jockey Joel Rosario in the saddle. Could his high-class California speed help him steal it? Anything’s possible.

The other undefeated horse in the year’s Derby is Helium, who won his first start as a 3-year-old off a 17-week layoff despite a wide trip in the Tampa Bay Derby-G2. Listed at 50-1 on the morning line, he was game to hold on for the win over fellow Kentucky Derby entrant Hidden Stash in the Tampa Bay race, and he did quite a few things only good horses can do off a layoff. Not that trainer Mark Casse couldn’t have a horse ready, and route horses are much easier to prepare off a layoff than are sprinters, but still, this horse was 15-1 in that race. Did we miss something? Can he improve again at monster odds to finish in the money? Seven-time Breeders’ Cup winning jockey Julien Leparoux gets the call.

This group will be tracked in the early stages by Hot Rod Charlie, Essential Quality, and possibly Helium, Mandaloun, Sainthood, King Fury, and Super Stock. It will then be back to the closers Known Agenda, O Besos, Hidden Stash, Keepmeinmind, Dynamic One, Like the King, Brooklyn Strong, and Bourbonic.
The pace should start to collapse on the turn, and we’re not sure who will be the first to fold. We’re going to take a shot that Rock Your World gets the best of the other speed just before Hot Rod Charlie and Essential Quality make their moves in late turn. Those two should battle it out from the top of the stretch and we’re picking Hot Rod Charlie to win the rematch against Essential Quality this time, with Known Agenda trying to find a way to rally by those two late.

The remaining horses that had been just back of the pacesetters should tire through the stretch after not being able to go with Hot Rod Charlie and Essential Quality. That will leave the bottom two, or at least the final slot in the Kentucky Derby Superfecta, open for a longshot rallier.

We’ll use Helium, O Besos, Super Stock, and King Fury third and fourth in the superfecta and key them with our top four selections. We’d like to take All in either the third or fourth leg of the superfecta, but with it being a minimum $1 bet this year, it makes that play basically out of reach for most players.
Instead, we’ll bet Hot Rod Charlie across the board, wheel him in all three positions in the Kentucky Derby Trifecta, with extra tickets using Known Agenda, Essential Quality and Rock Your World, key him first and second in the Kentucky Derby Exacta with those horses, and wheel him first and second to the board in $1 exactas, just in case something crazy happens.