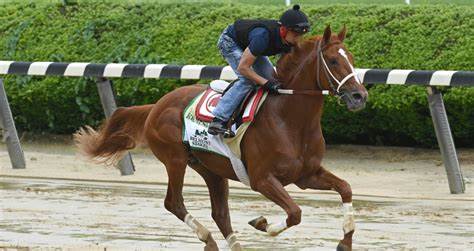 Morning-line favourite We the People (2-1) appears to be the lone speed in the 154th running of the Belmont Stakes on Saturday, which is the major reason he’s been made the favourite, but we’re going to stick with Kentucky Derby (G1) winner Rich Strike (7/2) for a number of reasons, including the fact that he should an overlay.

We the People has won three of his four starts including a romping 10 ¼-length wire-to-wire win in the Peter Pan Stakes (G3) going 1 1/8-miles at Belmont in his most recent start on May 14. His only career loss came two starts back in the Arkansas Derby (G1) on April 2, when he was washy before the race and wide early. That’s unlikely to happen in the Belmont, but the fact is he looked terrible in that race, and his recent romp in the Peter Pan was accomplished on a sloppy sealed track over a nondescript field.

We the People will be ridden by top jockey Flavien Prat and there’s little doubt he’ll be on the lead by himself, but this time he’s facing some tough, seasoned horses going farther than any of them have ever run before. If he gets away with a slow pace, he could hold on to win the Belmont, but at a short price we’re looking for a fit horse who has been honed in battles against some actual warriors.

The son of Travers Stakes (G1) winner Keen Ice is out of Canadian Oaks winner Gold Strike and all his races leading up to the Kentucky Derby were better than they looked. Three of them came over a synthetic track he probably didn’t like at Turfway Park, and when he did try to rally in those races, he always seemed to be stuck in traffic without being in any actual trouble. In the Derby he got a perfect ride behind a sizzling pace, BUT, when he did lay it down in the stretch he looked like a monster.

Rich Strike comes into the Belmont Stakes as a fresh horse, having skipped the Preakness Stakes, and he’s been working enthusiastically. Trainer Eric Reed says he’ll be closer to the pace in the Belmont, which can often negate a rallier’s late kick, but the pace is going to be slower regardless, so he should naturally be closer early. If first-time Belmont rider Sonny Leon has any kind of clock in his head, he should be able to time Rich Strike’s move just right, and you certainly can’t fault Leon’s ride in the Kentucky Derby.

Bet on the win , place and show, exacta, trifecta and more at Bovada!

The same can’t be said of the ride on Belmont Stakes second choice Mo Donegal (5/2), who was beside Rich Strike until the final turn of the Derby under top jockey Irad Ortiz Jr. but decided to go wide and ended up fifth beaten 3 ¾-lengths. It was a decent race by Mo Donegal, but he always looks like a reluctant rallier. The Wood Memorial (G1) winner does what he’s told to do, but he has yet to indicate either a quick turn of foot or the ability to seriously lay it down like Rich Strike did in the Derby.

Mo Donegal finished a length in front of fellow Belmont Stakes entrant Barber Road (10-1) in the Derby, and while Barber Road doesn’t seem to have the talent of the top choices in here, his grit and determination were clearly on display late in both the Rebel Stakes (G2) and the Arkansas Derby, in which he finished third and second respectively, with late surges. He simply gives his best every time.

Nest (8-1) is our sleeper longshot. The only filly in this year’s Belmont Stakes, she could take a run at We the People before Rich Strike, Mo Donegal and Barber Road get motivated, and she should have enough pedigree to get the distance. Nest comes into the Belmont off a solid second-place finish behind star filly Secret Oath in the Kentucky Oaks (G1) after having to wait mildly in late turn, and she might have made it into the win photo with slightly better racing luck.

Nest had won three in a row including the Ashland Stakes (G1) before the Kentucky Oaks and she did break her maiden at Belmont Park. Her Beyer figures are slightly lower than many in here, but they may not be a true indication of her actual chances. This horse is a tryer, and she is not out of her element with this bunch. The sleeper.

Creative Minister (6-1) ran better than we thought he would in the Preakness Stakes, finishing third beaten 3 1/4-lengths after a reasonably good inside trip, but he certainly didn’t catch your eye. He could make a bid to get near lone speeder We the People before the closers do, and the conditioning he gained in the Preakness should help him, but we just can’t see him moving forward enough off that race.

Skippylongstocking (20-1) is a rallying type who finished third in the Wood Memorial behind Mo Donegal, and fifth in the Preakness, but he just doesn’t seem to have the powerful finishing kick needed to win against the best in here. Golden Glider (20-1) finished second beaten 10 ¼-lengths by We the People in the Peter Pan Stakes and now meets an even tougher bunch in the Belmont going further.

We’ll play Rich Strike to win and wheel him up and down in the exotics with Mo Donegal, Barber Road, We the People and Nest, hoping the latter completes what would be an excellent Belmont Stakes Exacta! Before we go, in case you aren’t aware… we offer FREE daily horse racing picks!