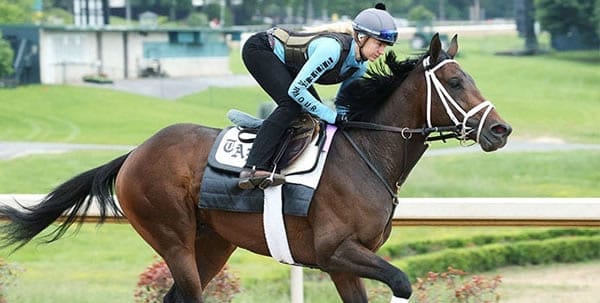 A favorite and a longshot for the Arkansas Derby, PLUS Secretariat!

The Kentucky Derby was supposed to be run, but due to the COVID-19 pandemic, it was postponed until September 5. Instead, we’ve got the Arkansas Derby-G1 and two Bob Baffert-trained favorites that should prove tough to beat. And we’ve also got the Kentucky Derby: Triple Crown Showdown, which will pit all 13 American Triple Crown winners against each other in a virtual race on NBC from 3-6 pm EST.

The Triple Crown Showdown is attracting interest from around the world, as it should! Can anyone really beat Secretariat at his best? Not likely. But that’s why they run horse races! You can’t bet on the Showdown, but you can pick a winner and make a donation to COVID-19 relief efforts here.

You can actually bet the Arkansas Derby, and if you’re going to win, you’ll have to beat the Baffert horses, both of which have shown more talent than any of their rivals in each division.

Charlatan makes his stakes debut in the first division of the Arkansas Derby in Race 11 and Rebel Stakes-G2 winner Nadal heads the second division in Race 13. Charlatan has been extremely impressive winning his only two starts on the front end at Santa Anita, while Nadal has won all three of his starts, including the San Vicente-G2 two starts ago and the Rebel Stakes at Oaklawn Park in his last start.

Both Charlatan and Nadal like to be on the lead, but Nadal is proven under pressure and should also be better odds than his stablemate. On the other hoof, Nadal faces a much tougher field in the second division than his stablemate does in the first.

Charlatan has been listed at even-money in the first division, and he breaks from post one, which means he’ll likely be sent to the lead. Even if they don’t send him, he looks like he’ll be on the lead, as there is only one other speed horse in the field, Shooters Shoot, and he may be totally outclassed by Charlatan, who has looked like a monster in his only two starts.

If something goes haywire on the front end, we’ll take Gouverneur Morris to rally for the win off his fourth-place finish in the Florida Derby-G1. We’ll throw Shooters Shoot, longshot Winning Impression and blinkers-off Anneau d’Or into our superfectas.

In the second division Nadal may not get the lead if Louisiana Derby-G2 winner Wells Bayou sends from post 11. He was sent to the lead in the Louisiana Derby and never looked back, so likely the same tactics here. That means Nadal will have to press and show what he’s made of in the stretch.

If the two-speed horses hook up, 49-1 Tampa Bay Derby winner King Guillermo could be worth a shot. He improved dramatically in the Tampa Bay Derby-G2 in his first start since finishing third in the Pulpit Stakes on the turf at Gulfstream on November 30. He owns the highest Beyer Speed Figure in the field at 99, and if he doesn’t bounce…

Other contenders for the superfecta include the undependable but nice odds in-an-outer Silver Prospector, San Vicente third-place finisher Fast Enough and longshot Farmington Road. The latter looks enticing as a rallier with Javier Castellano aboard for trainer Todd Pletcher, and would likely need a heated duel up front to produce his best, but we’re going to take a shot with him at long odds.

In the Triple Crown Showdown, we’ll take Secretariat on top as the most talented horses in the field. He’s really only beatable if he has an off day. On his best day, he’s much too good for these. We’ll take Seattle Slew next, as he’s a super gutsy speed horse who put away Affirmed twice in his career. Citation looks next best as an iron horse, who was also the first to earn $1 million on the track. And finally, we’ll take American Pharoah in fourth, not really knowing how good he could be on his best day.

Interestingly, our top three picks in the Triple Crown Showdown won their Triple Crowns in the era before Lasix and medication became a crutch for so many horsemen. The fact that they won the big three classics while racing drug-free makes them real horses with true speed, class, guts, and talent.

Our kind of horses.