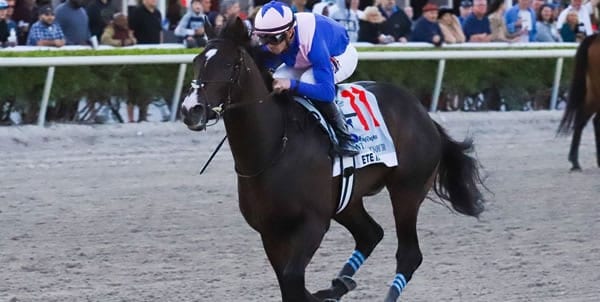 With the powers that be trying to shut down Gulfstream Park racing after Saturday, this could be the last chance to make a score over the next few months. There’s a $1.66 million carryover in the Rainbow 6, and the mandatory payout on Saturday means there will be millions more poured into the pool, especially considering there are few other sports betting opportunities these days.

The Florida Derby is the final race in the Rainbow 6 sequence, so let’s see if we can get it right.

Ete Indien will likely attempt to steal the Florida Derby the same way he did the Fountain of Youth-G2 in his last start, but he’ll have to go a sixteenth of a mile further to do it against more speed and a horse that beat him handily two starts ago, morning-line favorite Tiz the Law.

Ete Indien drew post 12 for the Florida Derby, and you have to think he’s going to be sent early to clear the field and slow down the pace. There’s more speed in this race than there was in the Fountain of Youth, but he did look awfully good running away from the field in that race and should be a square price at morning-line odds of 4-1.

Tiz The Law was forced to take back midway through the Holy Bull Stakes-G3 in his first start off the layoff, but he still disposed of Ete Indien rather easily in that race to win by three lengths. Listed as the morning-line favorite at 6/5, if he runs back to that race, he might not even need any pace to set the race up for him. If he improves, he’ll be too good for this bunch.

The other off-the-pacer we like a bit in here is Gouverneur Morris, who makes his second start off the layoff for trainer Todd Pletcher after winning an N1X allowance race at Tampa Bay. He’s not flashy, and his numbers are lower than the top pair in here, but there’s a chance he could improve enough to knock one of the top two out of the exacta.

Despite the large field in the Florida Derby, it’s difficult to find anything else to play with any confidence. Almost every other horse in here seems to have already run as fast as they are going to run, which isn’t good enough to beat Tiz the Law or Ete Indien.

As Seen On TV tracked Ete Indien from between horses in the Fountain of Youth and finished 8 3/4-lengths back of that one in third. Sprinter Shivaree ran an okay race in the six-furlong Hutcheson at Gulfstream Park in his last but couldn’t out finish an 18-1 shot and lost by a neck. Disc Jockey also looked average in his last, when despite running a decent number in the seven-furlong American Fabius Stakes, he couldn’t hold off a 75-1 longshot in the drive. These horses are much better than what he faced in that race.

My First Grammy is still a maiden and is being thrown to the wolves here after showing speed and tiring to finish second in his first start off the layoff going a mile. The highly thought of Independence Hall has some class speed but can also come from just off the pace, as indicated by his second-place finish in the Sam F Davis-G3 at Tampa Bay in his last start. The problem with him is that he didn’t show much willingness to fight back in that race in the stretch, and Sole Volante easily ran by him. That won’t be good enough to win this race.

To win this Florida Derby, a horse is going to have to be a “tryer”. Taking a flyer on Candy Tycoon at 20-1 on the morning line might not be a bad idea for exotic wagers. He was wide in the Fountain of Youth but did give his best to rally and hold the place behind Ete Indien. That was his first stakes try, and a little improvement with a nice trip could gain him a superfecta slot.

Sassy But Smart comes into the race off an average fourth-place finish in the Palm Beach-G3 on the turf at Gulfstream. He’s only run once on the dirt, finishing third going five furlongs in his second-lifetime start after showing speed. He’ll need more of both class and speed in here.

Rogue Element draws into the widest post outside Ete Indien with the scratches of Ajaaweed and Soros. Still a maiden for Calumet Farm, he gave bettors a thrill in his last when he showed speed going a mile and just failed to hold on, finishing second beaten a neck at a whopping 116-1! He looks like he could press from the outside. If he improves slightly and speed is holding, he might just hold on for a small piece of the superfecta at big odds. He’s definitely only a crazy flyer play though, as jockey Tyler Gaffalione moves to Disc Jockey for this race.

We’ll stick with a proven class speed, and tryer in Ete Indien to win and place and hope he gets the lone speed or slow pressing trip he needs to hold off Tiz The Law in the drive, but we’ll be using both on our Rainbow 6 ticket.

Let’s hope they can get it home for us!