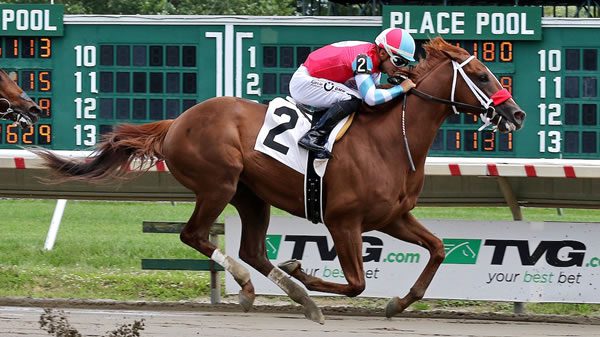 We just missed with our last longshot in the Rebel Stakes (G2) when Ethereal Road finished second at 15-1, but we did bet him to place, and a 75-1 shot beat him, which made both the exacta and the place payoff very lucrative! Can we do the same this week over a notoriously speed-biased track in the Fountain of Youth at Gulfstream Park? Why not? We’ll need an all-out duel and a fast pace, but that looks very possible, and the ralliers we like should all be excellent odds. Here’s the rundown from the inside post out. Markhamian proved that he was both quick and game in the Pasco Stakes at Tampa Bay in his last start and now faces other speed while stretching out and moving up in class. Simplification was off slowly in the Holy Bull Stakes (G3) in his last and couldn’t make up ground on pace presser White Abarrio, who got a nice breather up front. Howling Time makes his first start off a three-month layoff and a fifth-place finish in the Kentucky Jockey Club Stakes (G2) at Churchill Downs. He was taken out of his element and put on the lead in that race before tiring to finish fifth, but the top three finishers all came back to win graded stakes. In his two races previous to that, he came from off the pace to break his maiden and rallied to win the Street Sense Stakes at Churchill. He’s got both class and company lines, he’s proven off the layoff (won his debut), and he’ll likely get a good pace to run at. Trainer Dale Romans is 10% off the layoff, but this horse has three nice bullet works coming into the race. His morning line odds of 15-1 are too high. At 5-1 or better, he’s worth a play. In Due Time looked like he was having fun out there winning a one-mile allowance race at Gulfstream Park in his last. Not only did he show a winning attitude in that race, but he also showed a turn of foot to gain position when he needed it. He’s moving up in class but has two nice works since that race. Listed at 6-1 on the morning line, he should be a decent price at post time.Dean Delivers always gives his best, and he did defeat In Due Time by four lengths when they met in their 2022 debuts on January 8. There’s no questioning his heart, and he could make a bid in the stretch. We just think others here have more upside.

Click Here
Rattle N Roll hasn’t run since a romping victory in the Breeders’ Futurity (G1) at Keeneland on October 9. He made a nice move on the turn in that race, and if he’s improved at all as a 3-year-old, he could be a major force here. Trainer Ken McPeek is 14% off this type of layoff, and good recent works are nice to see. This may not be his primary objective, but he definitely can’t be dismissed, especially if he goes off anywhere close to his morning line of 8-1. A.P.’s Secret is another speed horse in here that showed good character after leading under pressure in his last to open up in the stretch and hold safe. He looks like he’s still learning and improving, but he’ll face more speed and better horses this time. One of those is Emmanuel, who has won two in a row on the front end. He broke his maiden at Gulfstream and then romped in an allowance race going a mile and 40 yards at Tampa in his last, a race in which he totally outclassed his rivals. He hasn’t been seriously tested yet, and this race will be a good measure of his true ability and class. High Oak looked good winning the Saratoga Special (G2) last year at Saratoga but came back to run a dull fourth in the Hopeful Stakes (G1). He also comes into this race off a long layoff. He’s been working well for Hall of Fame trainer Bill Mott, but we’re not sure of his class. The race setup should favor his off-the-pace style, but he’ll need to improve and be at his very best to win this. O Captain finished fourth in the Limehouse Stakes sprinting at Gulfstream in his seasonal debut on January 1 and now moves up in class while also stretching out. He could be sent from the outside, but the speed horses in here are much tougher than anything he’s faced in his two lifetime starts. Galt is a bit of a sleeper for trainer Bill Mott. He looked good breaking his maiden from off the pace routing on December 26, but then found himself on the lead in the Holy Bull Stakes and almost looked like he didn’t know what he was supposed to do when the winner passed him in late turn. He regrouped and kept coming to end up fourth beaten 5.5-lengths. We’re not sure if he was just green, or maybe just needed that experience against better horses. He could go either way here. With a well-timed ride from off the pace, he could make a bid at a nice price. He also gets a major rider switch to Joel Rosario.

Gulfstream Park often favors speed, but there are ample amounts of that in here, and there could be an all-out duel, so we’ll take a shot on a few off-the-pace types at what should be decent prices.

We’ll box In Due Time (6-1), Howling Time (15-1), and Rattle N Roll (8-1) in our exacta and key all three in a Florida Derby Superfecta to the board with ALL in every spot. They’ll need to fire their best shots, and the speed will have to totally collapse, but… The price will be right.