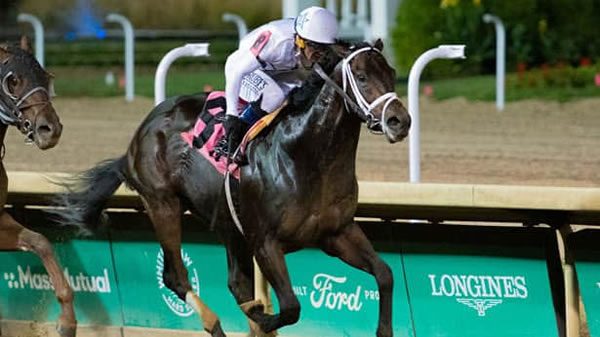 One Longshot, One Overlay Worth a Play in Tampa Bay Derby

Tampa Bay Derby morning-line favorite Classic Causeway should get the same front-end style trip he got while winning the Sam F. Davis (G3) off a layoff in his last start at today’s track, but there’s a chance he’ll need to run better today.

Classic Causeway rocketed out of the gate in the Davis and ran away from his opposition in the stretch without overdoing it. He could improve off that run, but he’ll face more speed today, and he’ll likely need to keep moving forward to win. At a short price, we’re going to try and beat him.

The most intriguing horse in the race is the undefeated Major General, who is coming into the Tampa Bay Derby off a six-month layoff with a ton of bullet works for trainer Todd Pletcher. Major General had solid reasons to lose his previous starts and turned back numerous challenges in both races.

In his last start on September 18, Major General won the Iroquois Stakes (G3) at Churchill Downs, going today’s distance. In his first lifetime start, he showed good quickness to get to the front and turned back more than one challenger before holding on to win by a neck. This horse looks like a hate-to-lose type, he can go to the front or come from off the pace, and if Pletcher has him fit enough, he is a definite upset possibility at a nice morning-line price of 9/2.

Belgrade is another undefeated runner in here, winning his first start sprinting easily as the heavy favorite at Fair Grounds and coming back to win a race he should have lost at Tampa Bay, going seven furlongs off the layoff on February 19. In that race, he stumbled at the break, dropped back to last, advanced quickly before a quarter had been run and ran into a wall of horses, dropped back to last again on the turn, and rallied outside to win by head. It was an impressive performance by a horse who is listed at 20-1 on the morning line, and he has to be included on your tickets at those odds.

Click Here
Davis runner-up Shipsational was also coming into the Davis off a layoff, and he broke a step slow before getting caught behind a slow second quarter and looking mildly uncomfortable between horses heading into the turn. He needs more pace to run at but could improve with a better trip. And he’ll have to based on the winner’s performance. Golden Glider finished fifth in the Davis after having to wait just a bit on the turn. He finished willingly enough late, but he was coming into that race fit, and he couldn’t get close to Classic Causeway late.

Happy Boy Rocket had a decent trip, although wide in an allowance race at Gulfstream Park in his last and outclassed his opposition in the drive while also appearing to be a little green. He could improve for Hall of Fame trainer Bill Mott and also gets a positive rider switch to Jose Ortiz.

Spin Wheel didn’t show much while finishing sixth beaten ten lengths in the Holy Bull (G3) at Gulfstream, and although that was a classy bunch, he would need a huge improvement to make a dent here. Grantham rallied and hung to finish fourth in the Withers Stakes at Aqueduct in his last start and would need a hot pace to run at to get into the trifecta here.

Trademark looks like a speed horse, and when he couldn’t get the lead in his first start off the layoff in the Davis, he ended up twelfth beaten 33 lengths. Even if he can get the lead here, he’ll be hard-pressed to hold it.

Giant Game finished third in the Breeders’ Cup Juvenile (G1) last year but came back off the layoff to finish eighth beaten 25 lengths in the Holy Bull Stakes at 4-1. He had a good trip tracking the pacesetters but went straight backward from the late turn. Trainer Dale Romans occasionally pops with these kinds of horses, but Giant Game is still hard to recommend off that dull 2022 debut.