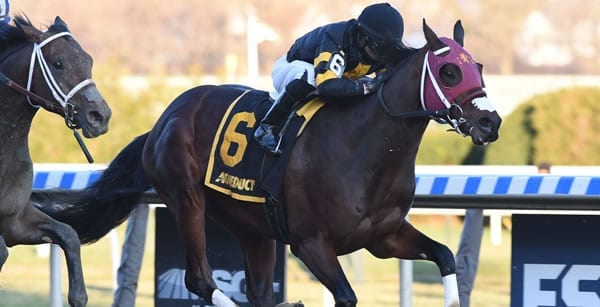 Road to the Kentucky Derby

Shotski the horse to beat in Withers, but upset possibilities exist

Shotski looks like the horse to beat based on stakes experience and numbers in the Withers, but an upset is very possible in this race. He set a slow pace under increasing pressure on December 7 in the Remsen-G2 going the same distance as today’s race at Aqueduct and opened up into the stretch before holding safe late. He’ll get the distance, but there is more speed today and his odds will be low.

Portos looked uncomfortable early while wide in the slop breaking his maiden in his last start at Aqueduct on December 31, but that was at today’s distance and he had lots left at the end. He looks like he could have some upside and this race could set up perfectly for him.

Prince of Pharoahs is interesting at a price. He made his stakes debut and first start off a layoff in the $150,000 Jerome Stakes going a mile at Aqueduct on January 20 and made a move before finishing an even second. He could improve in his second start off the layoff and might get just the right trip here.

Monday Morning Qb has won two in a row and was full of run outside before moving to the lead in the stretch in his last, the $100,000 Heft Stakes going seven furlongs at Laurel on December 28. He looks like he can go further and he did hold well at the end of that race.

Vanzzy cold be the longshot in the Withers. He set a slow pace in the Display Stakes at Woodbine going 1 1/16 miles on December 14 and held on to defeat a favourite who had some minor trouble. Not likely to get a slow pace lead today but he has won twice at a route and he might not need the lead to win.

Max Player had to be urged to keep up early in his last while breaking his maiden at Parx in the slop but outclassed his field once they turned for home in the mile race. Moves up in class here, but it might rain at Aqueduct and there is lots of speed in here to set up his rally.

New Commission finished a hard trying second in the Heft Stakes behind Monday morning Qb in his first stakes try after a decent trip between horses but also moves up in class here. Could have some upside but the pace will likely be faster here and not we’re not sure if he’ll be able to keep up when the running starts.

Mr. Shortandsimple pressed outside came with a sustained run to be just up to win a $50,000 NW2 claiming race going a mile in his last. He moves up in class here but has the pedigree to stretch out.

Thinking we might take a shot on Prince of Pharoahs at a price.