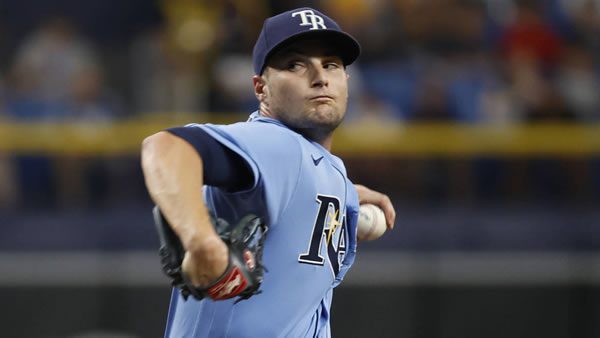 The Tampa Bay Rays host the Los Angeles Angels on Wednesday August 24th at Tropicana Field. The first pitch in this matchup is scheduled for 07:10 ET. The MLB Odds Board places Tampa Bay as the favorite (-260), with an OU line set at 7.0.

The Angels will look to bounce back from a tough loss to Tampa Bay by the score of 11-1. Los Angeles’s pitching staff finished the game by allowing 5 hits, leading to 11 runs. On offense, the Angels finished with 1 run on 11 hits. The loss came as Los Angeles was the betting underdog, getting 145.0 on the moneyline. This game went over the posted over-under line of 7.0 runs. Even with this game going over the total, Los Angeles still has an over-under record of just 52-62-9.

Over the Angels’ last 5 contests, they have a record of just 1-4. In this rough stretch of games, the team’s run differential comes in at -15. A key reason for Los Angeles’s recent struggles is an offense averaging just 1.2 runs per game over their last 5 contests, compared to a season average of 3.75. Los Angeles’s overall series record is just 14-21-4.

In their last game, the Tampa Bay Rays picked up a 10-run win over the White Sox by a score of 11-1. For the game, the pitching staff held the White Sox to 1 run on 11 hits. Offensively, they finished with 11 runs on 5 hits. Tampa Bay picked up the win while being favored at -175.0. So far, the team has won 60.0% of the games in which they were favored. The Rays and White Sox went over the run total line set at 7.0 runs. On the season, the team has an over-under record of just 54-58-10.

In their last 5 games, the Rays have put toget

Mike Mayers gets the start for the Angels, with an overall record of 1-0. So far, Mayers has put together an ERA of 5.22. In his appearances leading up to today, he has lasted an average of 1.62 innings. Teams have been able to rack up runs against him, as he has a batting average allowed of 0.254. Opponents are hitting for power against Mayers, as his HR/9 figure sits at 2.47. In terms of strikeouts, Mike Mayers has a strong strikeout percentage of 21.0%, including a per game average of 1.5. For the season, he has struggled with command averaging 2.76 walks per outing.

In today’s game, Tampa Bay turns to starter Shane McClanahan. For the year, he has a record of 4-3. So far, McClanahan has put together an ERA of 4.04. In his appearances leading up to today, he has lasted an average of 4.59 innings. Teams have been able to rack up runs against him, as he has a batting average allowed of 0.265. Throughout the season, McClanahan has done a good job at limiting home runs, allowing 1.04 per 9 innings. Overall, he is averaging 2.82 per game, on a K rate of 14%.

For the season, the Los Angeles Angels and Tampa Bay Rays will be playing their 6th game of the season. Currently, Tampa Bay is winning the season series 3-2. Through 5 games, the series over-under record is 3-2, with the average run total sitting at 9.86 runs per game. The averge scoring margin in these meetings is 6.6 runs. Dating back to last season, Tampa Bay picked up 6 wins compared to 1, taking the season series. In these 7 meetings, the two teams combined for an over-under record of 5-2. Last year, the Angels and Rays averaged 9.86 runs per game. On average, the winning team won by a margin of 4.14 runs per contest.

Heading into Wednesday’s American League matchup between Los Angeles and Tampa Bay, the Rays are the heavy favorite on the moneyline. This game features a lopsided pitching matchup, as Shane McClanahan has a WHIP of just .86 and is facing a light-hitting Angels lineup. Look for the Rays to cover the runline.

Free MLB Pick: Rays -1.5 Runline. Bet your Halos vs. Rays prediction and ALL your baseball wagers for FREE this week by taking advantage of a 125% real cash bonus up to $400 in free bets when you use bonus promo code PREDICTEM at GTBets Sportsbook! Note: They also give you a FREE half point on your favorite NFL, college football, NBA and college basketball bets! Sweet loyalty program too! A must have in your sports betting arsenal!