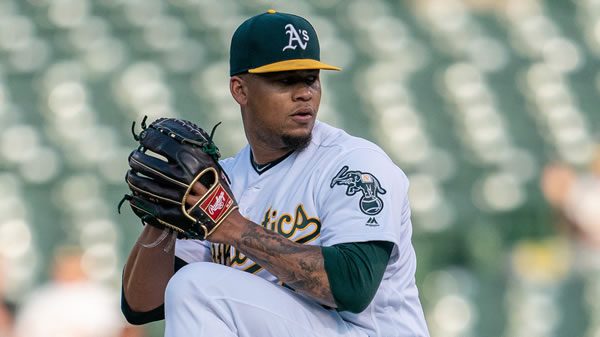 Money Line: Athletics +139 / Angels -165 (Bovada - 50% bonus! Rebates on ALL your wagers! FAST payouts! The BEST live wagering platform on the web! What more could you ask for?)

The Los Angeles Angels host the Oakland Athletics on Saturday, May 21st at Angel Stadium of Anaheim. The first pitch in this matchup is scheduled for 09:07 ET. The MLB Odds Board places Los Angeles as the favorite (-165), with an OU line set at 7.5.

In their most recent game, Oakland picked up a 2-run win over the LA Angels (4-2). On their way to the victory, the pitching staff gave up 2 runs on 6 hits. The Athletics benefited from an offense that generated 4 runs on 8 hits. This victory came despite being the betting underdog, getting 160.0 on the moneyline. Combined, the Athletics and LA Angels fell short of the over-under betting line of 7.5 runs. With this result, Oakland’s over-under record dropped even further, moving to just 14-22-5.

In their last 5 games, the Athletics are below .500, at 2-3. This mark has come on an average run margin of just -10. During this stretch, the offense is averaging 3.0 runs per game, similar to their season-long average of 3.32. Oakland’s overall series record is just 4-8-1.

The Angels will look to get back on track after dropping their last game by a score of 4-2 to the Athletics. Despite the losing effort, the team’s pitchers held the Athletics to 4 runs and 8 hits. The Angels’ offense ended the game with just 2 runs on 6 hits. Los Angeles came away with a loss, despite being favored on the moneyline (-195.0). So far, the team has won 62.0% of the games in which they were favored. With this result, the Angels and the Athletics combined to fall below the over-under line of 7.5 runs. The Angels now have a .500 OU record of 19-19-3.

In their last 5 contests, Angels have just 1 win, going 1-4. This recent slump is backed by a scoring margin of -8 over their last 5 games. Even with their recent struggles, the offense has been steady, averaging 4.0 runs per game. This is right in line with their season average of 4.83. On the season, Los Angeles has won more than half of their series, going 8-4-1.

Frankie Montas gets the start for the Athletics, with an overall record of 2-4. So far, Montas has put together an ERA of 3.67. In his appearances leading up to today, he has lasted an average of 6.12 innings. Through 8 outings, opposing teams have combined for a batting average of 0.201. Home runs have been a concern for Montas as he is allowing 1.1 per 9 innings. On the season, Frankie Montas has had no problem racking up strikeouts, posting a strikeout percentage of 27.0% while averaging 6.625 K’s per game. For the season, he has struggled with command averaging 2.39 walks per outing.

Los Angeles will roll with Michael Lorenzen (4-2) as their starter. To date, Lorenzen has an ERA of 3.57 while lasting an average of 5.85 innings per appearance. So far, Lorenzen has a batting average allowed of 0.22. Opposing batters are hitting for power at a below-average rate against Lorenzen, as he is allowing just 1.03 per 9 innings. Lorenzen has accumulated a strikeout percentage of 17.0% and a per-game average of 4.0. Command has been a problem for Lorenzen, as he is giving up 2.8 walks per outing.

For the season, Oakland Athletics and Los Angeles Angels will be playing their 5th game of the season. Currently, Los Angeles is winning the season series 3-2. Through 5 games, the series’ over-under record is 1-3-1, with the average run total sitting at 6.95 runs per game. The averge scoring margin in these meetings is 3.2 runs. Last season, Oakland picked up the series win, 15 games to 4. The over-under record in last year’s matchups was 6-12-1, with the average run total being 6.95 runs per game. The average scoring differential in this series was 2.95 runs per game.

In Saturday’s matchup between the Angels and Athletics, I recommend taking the under at 7.5 runs. Throughout the season, Oakland has been one of the worst hitting teams vs right-handed pitching. Overall, they are batting just .214 with 6 home runs against righties. On the other side, Frankie Montas has an expected ERA of just 2.93.