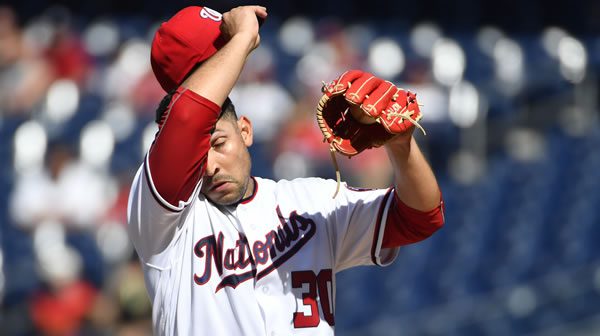 The Washington Nationals host the Oakland Athletics on Thursday September 1st at Nationals Park. The first pitch in this matchup is scheduled for 04:05 ET. The MLB Odds Board places Washington as the favorite (-110), with an OU line set at 7.5.

The Athletics are hoping to get back on track after falling to Washington by a score of 5-1. In the loss, Oakland’s pitchers gave up 5 runs on 9 hits. The Athletics ended the game with just 1 run on 6 hits. This defeat came despite being favored at -109.0. So far, the team has been the favorite in 21 of their games, winning at a rate of 38.0%. This matchup remained below the over-under line set at 8.5 runs. This outcome pushed Oakland’s over-under record further below .500 at 54-69-8.

The Athletics are looking to continue adding wins, as they are 3-2 over their last 5 games. Over this stretch, the team has a positive run differential at +3. Their hot play has been driven by an offense that typically averages 3.39 runs per game. But, over this stretch, this figure has bumped up to 4.0. Oakland’s overall series record is just 11-26-5.

In their last game, the Washington Nationals picked up a 4 run win over the Royals by a score of 5-1. For the game, the pitching staff held the Royals to 1 run on 6 hits. In the victory, the Nationals came up with 9 hits and 5 runs. Washington picked up the win while being favored at -101.0. So far, the team has won 36.0% of the games in which they were favored. With this result, the Nationals and Royals combined to fall below the over-under line of 8.5 runs. This result comes as no surprise, as the team’s over-under record is just 61-62-7.

In their last 5 contests, the Nationals have just 2 wins, going 2-3. This recent slump is backed by a scoring margin of -7 over their last 5 games. In their 5 most recent contests, the team is scoring at a rate of 3.8, similar to their season-long average of 3.73. Washington has a below .500 series record of just 8-28-5.

The Oakland Athletics will turn to rookie Ken Waldichuk, making his first appearance of his career. Throughout his tenure in the minors, Waldichuk has shown the ability to rack up strikeouts. With a matchup against a light-hitting Nationals team, he could be in line to see some success in his first outing.

On the other side, the Nationals send right-hander Paolo Espino to the mound with a record of 0-6 and ERA of 4.35. Even though Espino is 0-3 over his last 5 outings, the team has also picked up 2 wins in this stretch. This year, opposing teams have a batting average of .275 off the veteran.

For the season, the Oakland Athletics and Washington Nationals will be playing their 3rd game of the season. Today’s game will be a rubber match for the two teams, as Oakland and Washington each have 1 win. The over-under record in this series sits at 1-1. The average run total in these games is nan runs per game. In these matchups, the average scoring differential sits at 4.0 runs. Last year, the team’s split the season series at 0-0. The over-under record in last year’s matchups was 0-0, with the average run total being nan runs per game. The average scoring differential in this series was nan runs per game.

More Picks: Get our Dodgers vs. Mets recommended bet for their 9/1/22 game

Heading into Thursday’s game between Oakland and Washington, the oddsmakers see this game going either way at -110 on both sides. Look for rookie Ken Waldichuk to kick his career off with some success as the Athletics take down the Nationals.