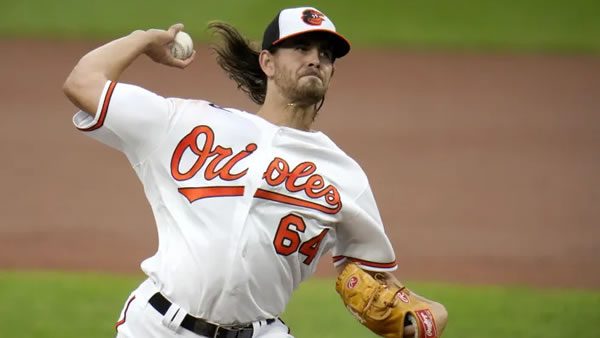 Money Line: Athletics +139 / Orioles -165 (Did you know you can bet 20-point college football teasers at Wagerweb?)

The Baltimore Orioles host the Oakland Athletics on Friday September 2nd at Oriole Park at Camden Yards. The first pitch in this matchup is scheduled for 07:05 ET. The MLB Odds Board places Baltimore as the favorite (-165), with an OU line set at 8.0.

The Athletics come into this game having suffered a 7-5 loss to Washington. In the loss, Oakland’s pitchers gave up 7 runs on 11 hits. On offense, the Athletics’ 11 hits and 5 runs ended up not being enough to pull out the win. This defeat came despite being favored at -105.0. So far, the team has been the favorite in 22 of their games, winning at a rate of 36.0%. Together, the Athletics and Washington combined to surpass the over-under betting line set at 8.5 runs. Games involving the Athletics have stayed below the over-under line more than half of the time, at 55-69-8.

The Athletics come into this game with a 3-2 record over their last 5 contests. During this time, they have an average scoring differential of +2. A key to their recent success has been an offense averaging 4.6 runs per game, compared to their season average of 3.40. Oakland’s overall series record is just 11-27-4.

Baltimore is coming off a 3 run win over the Guardians (3-0). In the win, the pitching staff allowed just 0 runs on 2 hits. The Orioles’ offense ended the game with just 3 runs on 7 hits. This was a good win for the Orioles, as they were underdogs at 160.0 on the moneyline. So far, the team has gone into 102 games as the underdog, still finding the win column at a rate of 51.0%. With this result, the Orioles and Guardians combined to fall below the over-under line of 7.5 runs. Now, Baltimore had an over-under record of 57-68-5.

Across their last 5 contests, the Orioles are above .500, going 3-2. During this time, the team’s run differential sits at +3. Baltimore has played above .500 baseball, despite averaging just 2.4 runs in their last 5 games. This is a drop in production compared to their season average of 4.20. On the season, Baltimore has won more than half of their series, going 22-17-4.

JP Sears gets the start for the Athletics, with an overall record of 3-0. In his previous outings, Sears has lasted an average of 3.14 innings, putting together an ERA of just 2.05. So far, batters are hitting just 0.184 against him. Not only does Sears have a strong batting average allowed, but he has also avoided giving up home runs. In his previous outings, opponents are averaging just 0.41 HR/9. Up to this point, Sears has a strikeout percentage of just 18.0% and a per-game average of 2.14. Leading into the game, he has shown a strong command of his pitches, averaging just 2.05 walks per contest.

Dean Kremer gets the start for the Orioles, with an overall record of 6-4. In his previous outings, Kremer has lasted an average of 5.54 innings, putting together an ERA of just 3.24. Across his previous starts, opposing teams have put together a batting average of 0.269. So far, Kremer has managed to keep the ball in the ballpark, allowing just 0.76 home runs per 9 innings. Per game, Dean Kremer is averaging 4.13, on a strikeout percentage of 18.0%. Kremer has done a good job at limiting walks, averaging just 1.94 per contest.

For the season, the Oakland Athletics and Baltimore Orioles will be playing their 5th game of the season. So far, Oakland is leading the season series, 3-1. The over-under record in this series sits at 1-3. The average run total in these games is 8.5 runs per game. In these matchups, the average scoring differential sits at 2.0 runs. Last year, the team’s split the season series at 3-3. In these 6 meetings, the two teams combined for an over-under record of 3-3. Last year, the Athletics and Orioles averaged 8.5 runs per game. The average scoring differential in this series was 3.5 runs per game.

Coming into Friday’s matchup between Oakland and Baltimore, the over-under line is set at 8 runs. However, look for this to be a low-scoring game, as both JP Sears and Dean Kremer have been pitching well for their teams. I recommend taking the under.

Free MLB Pick: Under 8 Runs. Bet your baseball predictions for FREE this week by scoring a massive unadvertised 100% real cash bonus up to $500 at Everygame Sportsbook when you use bonus code PREDICTEM on their special offers page AFTER you’ve made your deposit!