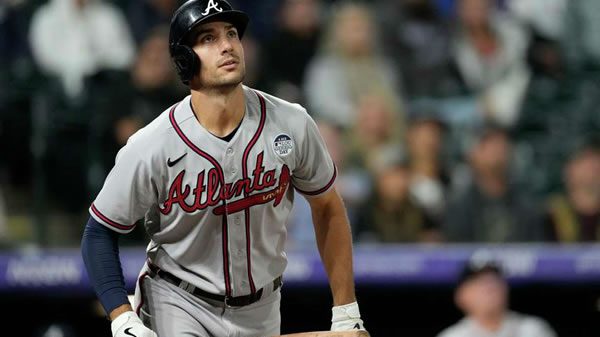 Money Line: Braves -105 / Phillies -115 (Bet on games at reduced odds at BAS Sportsbook! It saves you TONS of money and trumps ANY bonus you can get!)

The Philadelphia Phillies host the Atlanta Braves on Friday, October 14th at Citizens Bank Park. The first pitch in this matchup is scheduled for 04:37 ET. The MLB Odds Board places Philadelphia as the favorite (-115), with an OU line set at 7.5.

Heading into today’s game, Atlanta will be looking to tack on another win after taking down Philadelphia by the score of 3-0. Overall, the team’s pitching staff limited Philadelphia to 0 runs on 3 hits. The team was able to pick up the win despite scoring just 3 runs on their 4 hits. Heading into their last game, Atlanta was the betting favorite at -145.0. So far, the team has been the favorite in 138 of their games, winning at a rate of 69.0%. Combined, the Braves and Philadelphia fell short of the over-under betting line of 7.5 runs. Even after this game, Atlanta’s overall over-under record sits at 81-75-8.

The Braves will be hoping to pick up a win in today’s matchup, as they have gone just 2-3 over their last 5 games. This mark has come on an average run margin of just -4. A key reason for Atlanta’s recent struggles is an offense averaging just 4.0 runs per game over their last 5 contests, compared to a season average of 4.87. So far, Atlanta has won over half of their 52 series played, going 28-16-8.

Philadelphia will be looking to move on from a tough loss to the Braves by the score of 3-0. For the game, the pitching staff held the Braves to 3 runs on 4 hits. With their 3 hits, the Phillies could only plate 0 runners. Leading into Philadelphia’s loss, they were the underdogs, getting 125.0 on the moneyline. So far, the team has gone into 55 games as the underdog, still finding the win column at a rate of 44.0%. With this result, the Phillies and Braves combined to fall below the over-under line of 7.5 runs. Philadelphia still has an above .500 over-under record at (84-77-5).

Across their last 5 contests, the Phillies are above .500, going 3-2. Their recent success is backed by an average scoring margin of +2 (last 5). Philadelphia has benefited from strong pitching, as their offense has slipped in their last 5 games, averaging just 3.4 runs per game. Their overall average sits at 4.59. On the season, Philadelphia has won more than half of their series, going 25-22-6.

Atlanta will roll with Charlie Morton (9-6) as their starter. To date, Morton has an ERA of 4.35 while lasting an average of 5.52 innings per appearance. Morton comes into the game with a batting average allowed of .232. Opponents are hitting for power against Morton, as his HR/9 figure sits at 1.47. Per game, Charlie Morton is averaging 6.61, on a strikeout percentage of 28%. For the season, he has struggled with command averaging 3.3 walks per outing.

In today’s game, Philadelphia turns to starter Aaron Nola. For the year, he has a record of 11-13. Heading into the game, Nola has appeared in 32 contests, posting an ERA of just 3.25. On average, he pitches 6.41 innings per appearance. Overall, opponents have a batting average of just .218 against the right-hander. This year Nola is allowing just 0.83 home runs per 9 innings pitched. On average, he averages 7.34 K’s per game. Nola comes into the game hoping to improve his walk numbers, as he is averaging 1.27 free passes per outing.

Today’s matchup between the Atlanta Braves and Philadelphia Phillies will be their 22nd meeting of the season. Atlanta has the lead in the series at 12-9. Through 21 games, the series over-under record is 13-7, with the average run total sitting at 8.37 runs per game. In these matchups, the average scoring differential sits at 3.67 runs.

Heading into Friday’s NL Divisional Round matchup between Philadelphia and Atlanta, the Phillies have a slight edge on the moneyline. Even though Charlie Morton was a key part of last year’s World Series run for the Braves, he has been up and down all season long. Look for Aaron Nola to put together a strong outing as the Phillies take the 2-1 lead in the series.