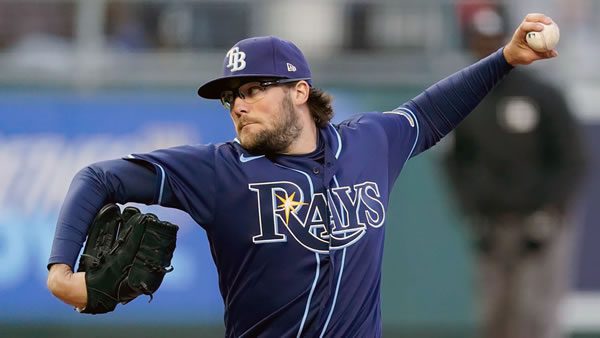 Money Line: Yankees OFF / Rays OFF at time of print

The Tampa Bay Rays host the New York Yankees on Tuesday, June 21st at Tropicana Field. The first pitch in this matchup is scheduled for 07:10 ET. The MLB Odds Board places Tampa Bay as the favorite (OFF), with an OU line set at OFF.

New York looks to keep things rolling after taking down the Rays by the score of 4-2. On their way to the victory, the pitching staff gave up 2 runs on 3 hits. The Yankees lineup had a good night at the plate, coming up with 7 hits, leading to 4 runs. In the matchup, New York was favored at -145.0 on the moneyline. So far, the team has been the favorite in 62 of their games, winning at a rate of 74.0%. Together, the Yankees and Rays stayed below the over-under line set at 6.5 runs. With this result, New York’s over-under record dropped even further, moving to just 30-36-1.

The Yankees are looking to continue adding wins, as they are 4-1 over their last 5 games. Over this stretch, the team has a positive run differential at +15. Their hot play has been driven by an offense that typically averages 5.13 runs per game. But, over this stretch, this figure has bumped up to 6.2 So far, New York has won over half of their 22 series played, going 18-2-2.

In Tampa Bay’s last outing, they fell by a score of 4-2 to the Yankees. Even in the loss, the pitching staff allowed just 4 runs on 7 hits. At the plate, the Rays only came through for 2 runs on 3 hits. This loss came as no surprise, as Tampa Bay came into the game as the underdog, getting 125.0. So far, the team has gone into 18 games as the underdog, still finding the win column at a rate of 33.0%. Combined, the Rays and Yankees’ run total fell below the over-under line of 6.5 runs. Now, Tampa Bay had an over-under record of 28-36-3.

Nestor Cortes gets the start for the Yankees, with an overall record of 6-2. Through 12 appearances, Cortes has an ERA of just 1.94 while averaging 5.77 innings per appearance. So far, batters are hitting just 0.19 against him. In addition, to his strong BA allowed, he has been able to limit power, allowing just 0.78 home runs allowed per 9 innings. Per game, Nestor Cortes is averaging 6.25, on a strikeout percentage of 28%. Leading into the game, he has shown a strong command of his pitches, averaging just 2.2 walks per contest.

Josh Fleming gets the start for the Rays, with an overall record of 2-3. So far, Fleming has put together an ERA of 6.38. In his appearances leading up to today, he has lasted an average of 3.02 innings. Opposing teams have hit the ball well against the left-hander, with a batting average of 0.329. Opposing batters are hitting for power at a below-average rate against Fleming, as he is allowing just 0.99 per 9 innings. In terms of strikeouts, Fleming is averaging just 2.83 K’s per game. So far, he has struck out 18.0% of the batters he has faced. Fleming has done a good job at limiting walks, averaging just 4.42 per contest.

For the season, the New York Yankees and Tampa Bay Rays will be playing their 9th game of the season. New York has the lead in the series at 6-2. The over-under record in this series sits at 2-6. The average run total in these games is 7.79 runs per game. In these matchups, the average scoring differential sits at 2.12 runs. Dating back to last season, the Tampa Bay picked up 11 wins compared to 8, taking the season series. In these 19 meetings, the two teams combined for an over-under record of 9-10. Last year, the Yankees and Rays averaged 7.79 runs per game. On average, the winning team won by a margin of 4.0 runs per contest.

In yesterday’s series opener between New York and Tampa Bay, the Yankees continued to separate themselves in the AL East, as they now have a 12 game lead in the division. Look for New York to pick up another win, as Nestor Cortes has given up just 2 runs in his first 2 outings against the Rays. Look for the Yankees to cover the runline.

Free MLB Pick: Yankees -1.5 Runline. Note: Football season is right around the corner! Be sure to bookmark our Free NFL Football picks page as we’ll have more content than ever this season!