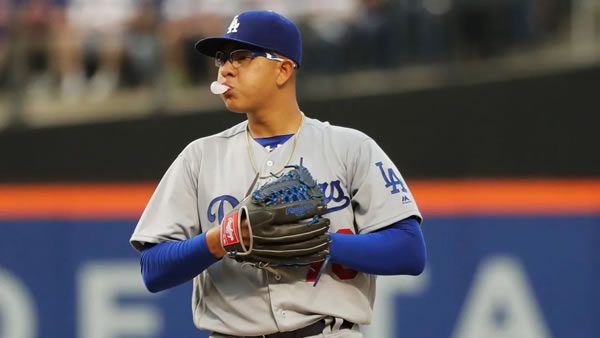 The Los Angeles Dodgers host the Arizona Diamondbacks on Thursday September 22nd at Dodger Stadium. The first pitch in this matchup is scheduled for 10:10 ET. The MLB Odds Board places Los Angeles as the favorite (-200), with an OU line set at 7.0.

The Arizona Diamondbacks will look to pick up another big win after they defeated the LA Dodgers by a score of 6-1. Overall, the team’s pitching staff limited the LA Dodgers to 1 run on 3 hits. The Diamondbacks lineup had a good night at the plate, coming up with 7 hits, leading to 6 runs. This victory came despite being the betting underdog, getting 270.0 on the moneyline. Combined, the Diamondbacks and LA Dodgers fell short of the over-under betting line of 8.5 runs. This outcome pushed Arizona’s over-under record further below .500 at 68-78-4.

Over the Diamondbacks’ last 5 contests, they have a record of just 2-3. In this rough stretch of games, the team’s run differential comes in at -1. On offense, Arizona’s offense has experienced a dip in production, averaging 3.8 runs per game over their last 5 contests. Arizona’s overall series record is just 17-22-8.

Los Angeles is coming off a 5 run loss to the Diamondbacks. Dropping the game 6-1. On their way to giving up 6 runs, the Dodgers staff allowed 7 hits. The Dodgers offense ended the game with just 1 run on 3 hits. Los Angeles came away with a loss, despite being favored on the moneyline (-330.0). So far, the team has won 70.0% of the games in which they were favored. With this result, the Dodgers and Diamondbacks combined to fall below the over-under line of 8.5 runs. This result comes as no surprise, as the team’s over-under record is just 63-74-12.

Zac Gallen gets the start for the Diamondbacks, with an overall record of 12-3. Currently, Gallen has an ERA of just 2.58 while pitching an average of 5.86 innings per outing. So far, batters are hitting just 0.188 against him. In addition, to his strong BA allowed, he has been able to limit power, allowing just 0.66 home runs allowed per 9 innings. In terms of strikeouts, Zac Gallen has a strong strikeout percentage of 26.0%, including a per game average of 5.96. In his previous outings, walks have been an issue, as Gallen is averaging 2.36 free passes per outing.

Julio Urías gets the start for the Dodgers, with an overall record of 17-7. Currently, Urías has a strong ERA of just 2.27 while pitching an average of 5.65 innings per outing. So far, batters are hitting just 0.197 against him. This year, home runs have been an issue for Urías. So far, he has allowed 1.19 per 9 innings. Overall, Julio Urías has struck out 24.0% of the batters he has faced. On average, he averages 5.43 K’s per game. For the season, he has struggled with command averaging 2.1 walks per outing.

Today’s matchup between the Arizona Diamondbacks and Los Angeles Dodgers will be their 19th meeting of the season. Los Angeles holds the edge in the series at 13-5. Through 18 games, the series’ over-under record is 5-13, with the average run total sitting at 9.32 runs per game. In these matchups, the average scoring differential sits at 3.5 runs. Dating back to last season, the Los Angeles picked up 16 wins compared to 3, taking the season series. The over-under record in last year’s matchups was 10-8, with the average run total being 9.32 runs per game. On average, the winning team won by a margin of 4.68 runs per contest.

Heading into Thursday’s matchup between Arizona and Los Angeles, the over-under line is set at 7 runs. Despite playing in the same division, both teams don’t have a lot of experience against today’s starters. So far, Julio Urias has yet to face the Diamondbacks this year, while Zac Gallen has faced LA just 1 time. Look for this pitching matchup to live up to its hype in what should be a low-scoring contest. I recommend taking under.

Free MLB Pick: Under 7 Runs. Bet your baseball picks for FREE this week by taking advantage of a 100% REAL CASH bonus up to $500 when you enter promo code PREDICTEM at Betnow Sportsbook!