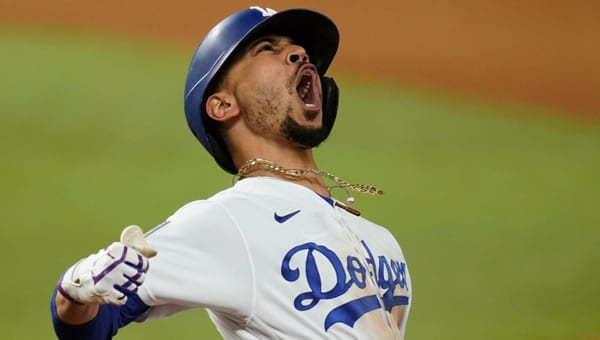 After taking the opener of this series Monday night, the Dodgers shoot for the series victory when they host the Cardinals again Tuesday night at Chavez Ravine. Los Angels sends veteran lefty David Price to the mound here, probably as an “opener,” against walk-happy John Gant for St. Louis. The Dodgers face another hefty price on this game, which brings the run line into play. Here’s how we homeworked this game and today’s MLB pick.

Tuesday’s baseball betting odds opened Los Angeles at around -175 over St. Louis with an over/under of eight runs. Early betting action then steamed LA 25 cents to -200 and bumped that total to eight.

Los Angeles won Monday’s series opener 9-4. The Dodgers actually trailed St. Louis 3-2 through 5 ½ innings, then put up a four-spot in the bottom of the sixth and cruised from there for the victory and the money as -185 favorites. LA also cashed in at a price of +115 against the run line. Monday’s game played over its total of seven runs in that Dodgers sixth inning. Monday’s win snapped a three-game losing skid for Los Angeles. At 32-22 overall, LA trails first-place San Francisco by two games in the NL West. The Dodgers are also playing slightly off the pace against their season wins O/U of 102.5, which was the highest total in Baseball. With Monday’s loss, the Cardinals are 4-2 over their last six games. At 30-24 overall, St. Louis now sits in second place in the NL Central, a half-game behind the first-place Cubs. But the Cardinals are also playing just ahead of pace against their season wins over/under of 86.5. This series is the first meeting between these two teams since 2019.

Lefty Price is 0/2 on quality starts this season, serving as an “opener” both times, to go along with nine appearances in relief. In his first start of this season 12 days ago, he held Arizona scoreless on three hits through two innings of a 3-2 Los Angeles victory. And last Thursday, he held San Francisco scoreless and hitless through 2 2/3 innings, with five strikeouts, in a 4-3 Dodgers win. Over his last four games, Price has thrown 6 2/3 scoreless innings, allowing four hits, with zero walks and eight whiffs. This will be Price’s first start against St. Louis since 2015 when he was with Detroit, and that’s a long time ago. Gant is just 1/9 on quality starts this year, but that’s thanks mainly to a short leash. Five times this season, he’s gotten within three outs of a QS only to get pulled. And he’s been tough as of late. Last Wednesday, he held the White Sox scoreless on five hits and three walks through five innings of a 4-0 St. Louis victory. And over his last six starts, he’s allowed just six runs – only four earned – and 24 hits through 30 2/3 innings. He’s also, however, walked 20 guys over that span, thus the short leash. The Cardinals are 5-4 with Gant this season, and that’s about what they should be. This will be Gant’s first start against the Dodgers since 2018, and that’s also already a long time ago.

Splits With the Sticks

The Dodgers get the check-mark in the pitching match-up here because of the combination of Price and the LA bullpen against Gant and his walks and the St. Louis pen. So we like Los Angeles. But we don’t like that Price. So we’ll take a chance and play LA against the run line, getting around +110, giving the run and a half.