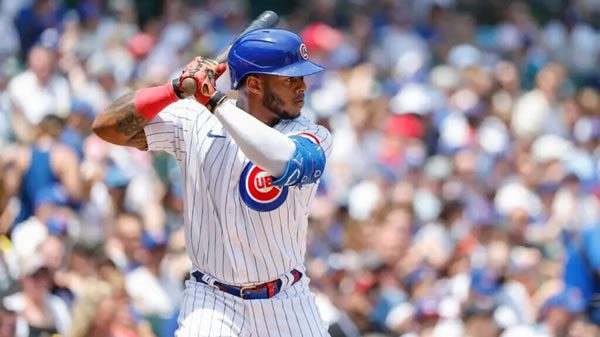 The Chicago Cubs host the St. Louis Cardinals on Thursday, June 2nd at Wrigley Field. The first pitch in this matchup is scheduled for 08:05 ET. The MLB Odds Board places Chicago as the favorite (-110), with an OU line set at 8.0.

St. Louis looks to keep things rolling after taking down the Padres by the score of 5-2. On their way to the victory, the pitching staff gave up 2 runs on 6 hits. The Cardinals benefited from an offense that generated 5 runs on 8 hits. This victory came despite being the betting underdog, getting 119.0 on the moneyline. This matchup remained below the over-under line set at 8.5 runs. However, for the season, St. Louis still has an overall over-under record of 24-23-3.

The Cardinals are looking to continue adding wins, as they are 4-1 over their last 5 games. During this time, they have an average scoring differential of +4. St. Louis’s offense heads into action averaging 4.4 runs per game in their last 5 contests. Similar to their season average of 4.74. So far, St. Louis has won over half of their 16 series played, going 8-3-5.

The Cubs are coming off a tight 4-3 win over the Brewers. In the winning effort, the team’s pitchers held the Brewers to 3 runs and 8 hits. The Cubs’ offense ended the game with just 4 runs on 7 hits. In the game, Chicago was able to take care of business as they were the favorite at -105.0. For the season, the team has been favored in 17 games, winning at a rate of 41.0%. With this result, the Cubs and Brewers combined to fall below the over-under line of 8.0 runs. Chicago still has an above .500 over-under record at (24-23-3).

The Cubs come into today’s game looking to turn things around, as they are just 2-3 over their last 5 games. During this time, the team has a run differential of -2. In their 5 most recent contests, the team is scoring at a rate of 4.6, similar to their season-long average of 4.40. Chicago has a below .500 series record of just 4-7-5.

The Chicago Cubs will send Keegan Thompson to the mound with an overall record of 5-0. Currently, Thompson has a strong ERA of just 1.57 while pitching an average of 3.64 innings per outing. So far, batters are hitting just 0.217 against him. In addition, to his strong BA allowed, he has been able to limit power, allowing just 0.67 home runs allowed per 9 innings. Thompson is in the bottom half of the league in strikeouts, averaging just 3.18 K’s per game. This includes a strikeout percentage of 23.0%. Throughout the season, Thompson has avoided walking batters, allowing just 2.48 per contest.

Today’s game between the St. Louis Cardinals and Chicago Cubs is their first matchup of the year. Going back to last year, St. Louis won the season series, 10 games to 9. In these 19 meetings, the two teams combined for an over-under record of 10-9, with the average scoring differential sitting at 3.11 runs. Between the games, the average run total was 9.0 runs per game.

Heading into Thursday’s NL Central matchup between Chicago and St. Louis, the betting lines imply this game could go either way. The Cubs come into the game winning their final 2 contests vs Milwaukee, and look forward to another strong outing from Keegan Thompson. Chicago has won 5 straight games with the righty on the mound. Even though the Cubs have an inferior overall record, I see them picking up their 3rd straight win.

Free MLB Pick: Cubs Moneyline. Bet your Cards/Cubbies pick and ALL your baseball wagers for FREE this week by taking advantage of a 100% real cash bonus on your first deposit of up to $500 when you use bonus code PREDICTEM at Betnow Sportsbook!